An Invitation to Norfolk House 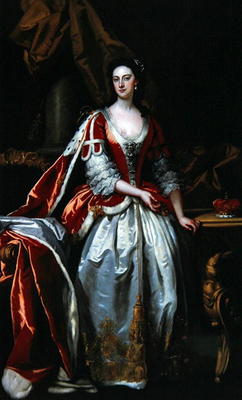 
In this world there is much to be embraced. I am the daughter of Edward Blount and Anne Guise and I am the wife of Edward Howard, 9th Duke of Norfolk. The Duke succeeded his brother Thomas Howard upon his death.

Edward Howard needed an heir- a wife. I was still a young woman- a very young woman when we married. I died in 1773-the Duke died four years later.
We had no children- no heir was left to carry the many titles garnered through generations- but that is the end of our story. There was much to be celebrated-before it all ended.
Beauty. Devotion. History.
My husband to be was living in the south of France and we began our married life in France. There, I was captivated by the beauty of all things French. As Catholics we are allowed to worship openly  there- however  my husband and I returned to England in 1732 when his brother ,the 8th Duke died.  Edward-my husband was now the 9th Duke of Norfolk.  Because of the continued  questioned loyalties of the Howards and our faith- the Duke was unable to participate in political affairs. Instead- the Howards set their energy and mind to their estates and  the acquisition of great wealth. We are rich.
Our hope for the future lies in London and the building of Norfolk House. We embark for London, leaving  our beloved Workshop Manor behind for a time. 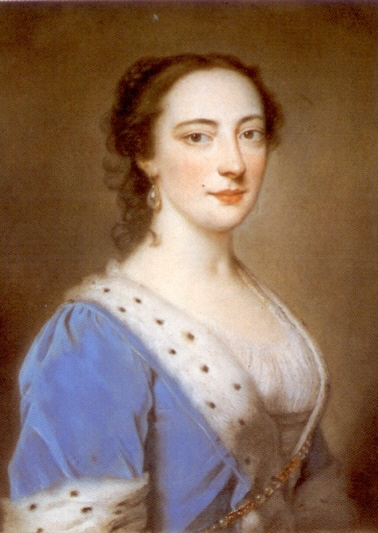 Generous touches of ermine on vibrant blue- I have tastes for all things French.


The 'Dutchess' of Norfolk ,
"Mary Blount", the decorator
(along with he 9th Duke of Norfolk - her husband) 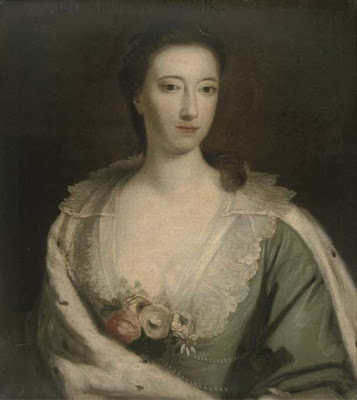 In 1748 , with agreement from my husband the Duke, architect Matthew Brettingham is retained to design  the new London palace. Brettingham, once Kent's man, whose work on Holkham Hall has convinced me he is right to design the palace I plan to construct it on our Saint James Square property. The existing property in St. James must be pulled down  as does the property next door the Duke has acquired, giving Brettingham's design space to soar. I have my own plans for the interior-as does the Duke. It is agreed the facade of Norfolk House will be a very austere one, but what lies beyond that will be -what is the phrase-"over the top!"

We have moved through Brettingham's designs and our desire for the robust curves of France, I have declared to the Duke we must have Borra- an Italian- to carry out my instruction!  I have an exquisite plan for a Musick Room in the Rococo style-so fashionable at the French Court.  From that moment, the Italian Giovanni Battista Borra continued with me on perfecting of our grand palace. 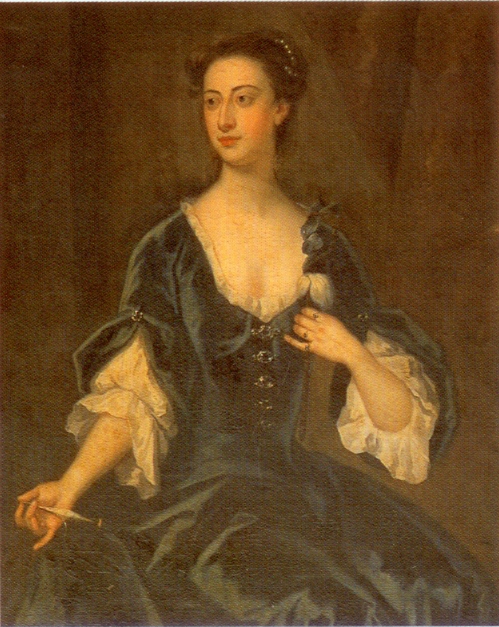 knowing my love for needle work, Vanderbank painted  me with a knitting shuttle.


I have kept the extravagant engravings of Oppenord and Mesissonnier and made quick notes on them on details I must have in these rooms. I favor the restraint of Oppenord to Mesisonnier's wild exuberance. Executing the work- Cuenot will do the carvings & Thomas Clarke will do the important plasterwork.
All is in place.

The Musick Room- not an instrument will be seen - it is to be a drawing room-but called a Musick Room. It will set the fashion for Musick Rooms.  It is to be decorated with carved musical trophies and  furnished with card tables, chairs and stools- a bit sparsely-it is the room itself that will be central. Though there are two other drawing rooms they are nothing to this one. As one enters the Entrance Hall there might be a moment's disappointment- the room reflecting the exterior, Brettingham has worked the Howard crests all round in the frieze. Just beyond this room- the staircase and that will give the viewer cause to hope. Large carvings-trophies tied in ribbons holding all matter of objects.

As for the Musick Room, the ideas are entirely mine. The ceiling is filled with gilded trophies of the Arts: Music, Painting, Literature Sculpture, Geometry, Architecture,  Astronomy and Surveying-amongst others that should and must be represented. Thomas Clarke under Borra's direction is to do the plasterwork here. Six more musickal trophies on the wall and three looking glasses complete the decorations- all in white and gold. I have imposed a certain order to each of the rooms at Norfolk House. Each  has its own particular colour scheme: the Green Damask and the Red Velvet Drawing Rooms- quite the novelty in its day.

"Would any foreigner, beholding an insipid length of wall broken into regular rows of windows, in St James's Square, even figure from thence the residence of the first Duke of England?" ( from an anonymous author of Critical Observations on the Buildings and Improvements of London, 1771)  Ah!  the ever boisterous anonymous, but what lies beyond the facade is "regarded as one of the wonders of London." ( John Cornforth London Interiors)  Isaac Ware, whose philosophy we embrace wrote 'In town a hall is a place of reception for servants, therefore, in this, neither magnitude nor elegance are needful: in the country, where there are other ways into the house, the hall may be an elegant one.' (Complete Body of Architecture, 1756) 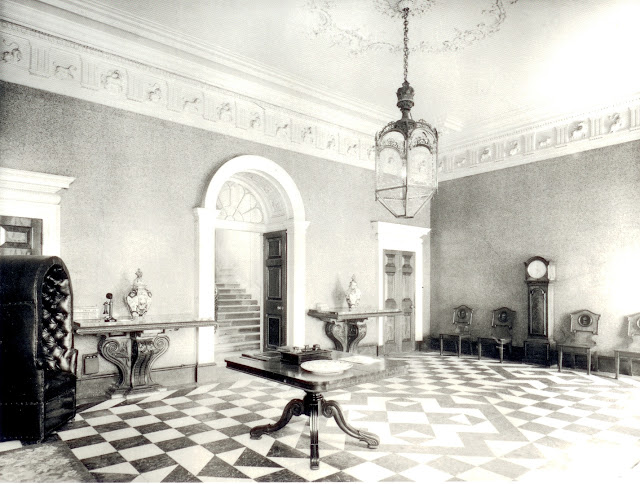 1756.
All is in place for a grand entertainment to open the doors of Norfolk House in February.
The great event finally arrived .
I sat the whole of that evening in the Musick Room so as to speak with all who pasted through the rooms and there I could observe some of the whispers and pointings. I think the room rendered many speechless for a moment.
The Duke was sent off to the Great Room with my niece -a steady girl, to greet guests in that room.
The Musick Room is mine.

I overheard Walpole say to Lord Rockingham- 'Oh! there is all company here tonight afraid of the Duchess and the Duke afraid of all the company.'

William Farrington wrote more of that beautiful night: " The Dutchess having been so kind to send me a ticket, on opening the Grand Appartment, which as was expected prov'd the finest Assembly ever known in this Kingdom, There were all eleven rooms Open, three below, the rest above."

That very evening dear William Farrington ask of the coverings of the windows 'Sattin or Taffity?'  Later I understand Farrington described my Musick Room as 'Wainscotted in a whimsical Taste, the Pannels fil'd with extreem fine Carvings, the Arts & Sciences all Gilt, as well as the Ceiling, Which was the same design.' I think he was rendered somewhat lacking in expression from the exuberance- the magic of the room.

The Staircase at Norfolk House 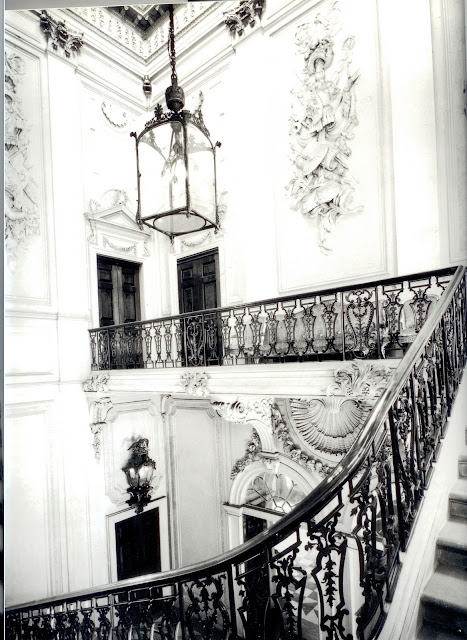 Here is- a sort of sad look at my Musick Room with what looks to be heavy seats about the grand space-as if it were to be lounged about it in. One can make out the ceiling trophies nicely and the decorations of the room though. (photographed in 1938) 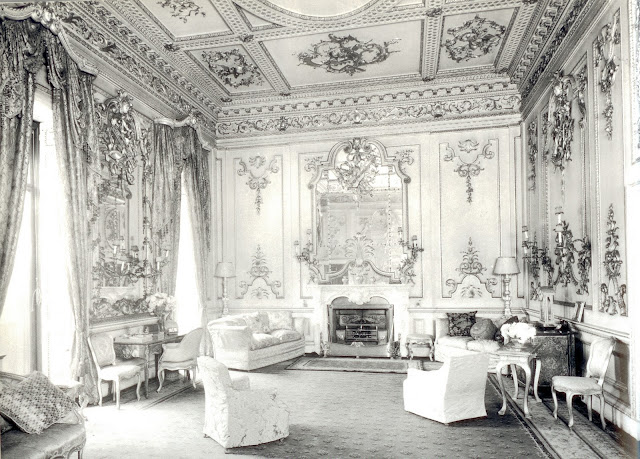 I do know this ceiling! Many of the ceilings Brettingham set in place remained. Yet this one is the work of the great Borra, Cuenot & the plasterer Clarke.
Where correct, I introduced the Rococo lines, yet much of the decoration Brettingham put in place was kept.
I am a sensible wife. The Duke is a good husband. 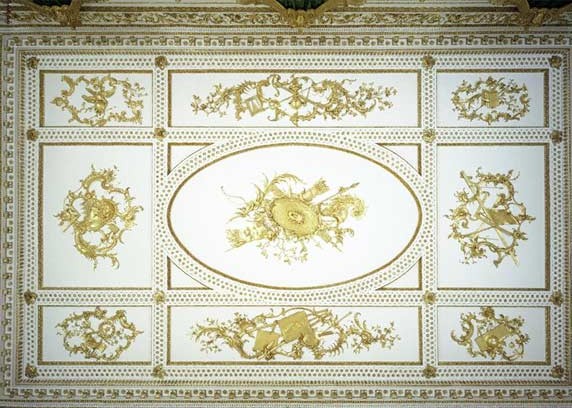 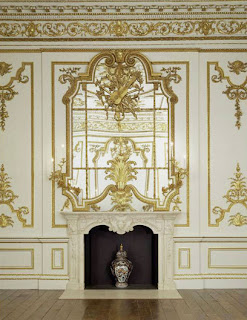 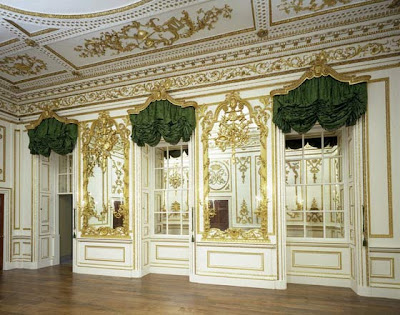 The exuberant Rococo style carried right through by our own Cuenot with paint and 'guilt' on stools in 'green and gold' to match the coverings of green in the room. If you could have seen it then!  I placed three card tables, a dining table and 14 stools of different sizes, seven in different lengths and seven smaller square stools.
The room speaks for itself, little else is needed.
It was Beauty.

I understand  that after Walpole viewed the rooms he wrote, "All the earth was there. everybody was gazing in the air and treading on one another's toes. In short, you never saw such a scene of magnificence and taste. The tapestry, the embroidered bed, the illumination, the glasses, the lightness and novelty of the ornaments, and the ceilings are delightful."
Walpole was right- So many beautiful rooms. The Chinese Dressing Room, with its delicate 'China Patern Paper'-such a beautiful palace.

There would be many triumphs at Norfolk House.
Many at our beloved Worksop Manor and much loss. I never finished the work I had envisioned for that dear place, where after a devastating fire we rebuilt with drawings-many of my own- for a five hundred room structure with'  I 'think still... one more room to it,' wherein... I...'might be confined as a mad woman.' I did know my own weaknesses you see.
Gone, both gone now. Worksop lasted less than sixty years after the Duke died. That exquisite jewel of  Norfolk House was torn down in 1938, almost two centuries after I left this earth. But there was that once upon a time- it left great men speechless  that evening when it dazzled with all the candles burning and the looking glasses reflecting their flame like the stars in an infinite firmament.


I should add, the Musick Room of Norfolk House was saved and is now considered one of the most important rooms in the Victoria and Albert Museum. Just today I viewed a short on the V&A's  newest exhibition a Yohji Yamamoto retrospective. The interview  here-takes place in the very much alive Norfolk House Musick Room-

Email ThisBlogThis!Share to TwitterShare to FacebookShare to Pinterest
Labels: Duchess of Norfolk, how they decorated, Mary Blount, Norfolk House