.
Horst P. Horst- how must the world have looked to him? Ivan Terestchenko-what does he see that I always miss?
Surely great photographers are given extra sight sensors. I often look at their images and wonder. In a collection of Horst photographs of his own garden at Oyster Bay Cove, Long Island (House and Garden 1969 Dec.) &  the book The Garden Room* with Ivan's own photographs of the Horst garden- we get to glimpse of the photographers' work. What did they see?

Horst by Horst and Horst by Terestchenko at Oyster Bay 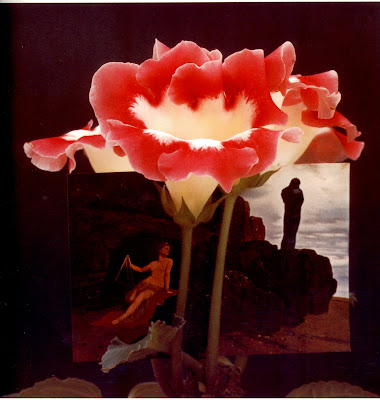 Still Life with Flowers and Bocklin
by Horst-c.1959 Oyster Bay
Ivan included this Horst photograph in his Horst profile
Horst made this pergola a part of his summer living space- just off of his study. The latticing has been sawn away at points to create a Chinese Chippendale pattern. How fabulous is that! Other details in the room-a slash of red curtain, a red lacquer table and the simple still life on the table show Horst style as utterly timeless. 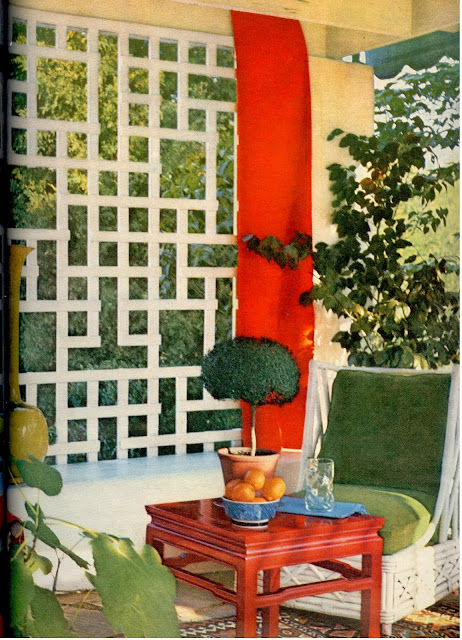 Ivan's photograph of the same room reveals some changes but the same casual perfection is in residence 25 years later. Visible in both photographs: the low plaster seating that is a part of the pavilion's structure. The repetition of solid colour cushions in bright orange and yellow are in principle acting as the red and orange does in Horst's own photograph of the room- a punctuation to nature. 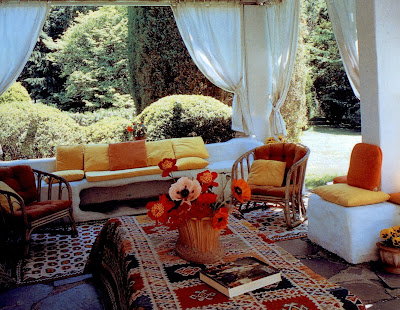 Horst's photograph of British artists Gilbert and George
planted on a low seat like the one above
Oyster Bay, c.1976 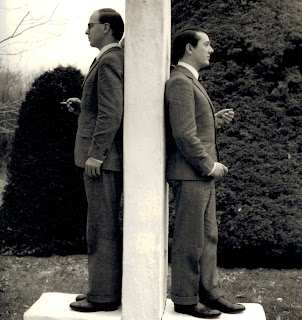 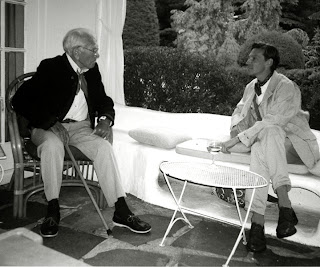 Ivan's portrait of Horst
In an interview with Ivan  he said- I met him in his home in Oyster Bay. Wouldn't dare to photograph him, so I sketched him instead. 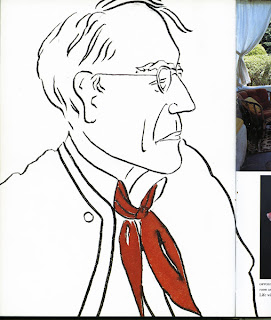 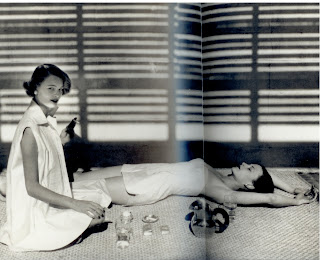 Horst's Oyster Bay in 1969, By this time Horst had been cultivating the grounds for 20 years. The simple white house- Horst's own design, is based on a Tunisian one and is enveloped by  green. The grounds were once a part of a park on the Louis Comfort Tiffany estate. 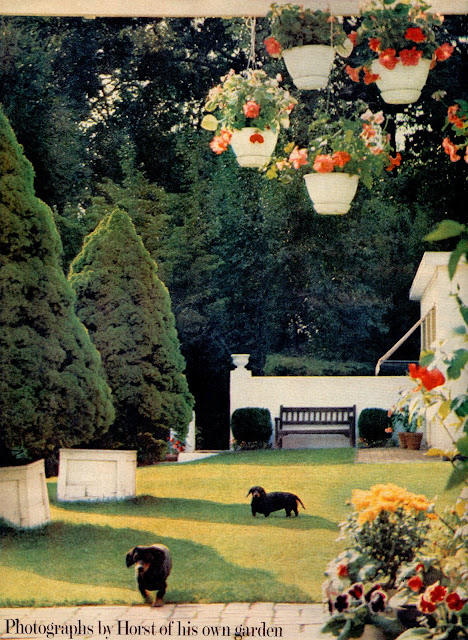 Dachshunds obviously filled both photographers' lens. Horst photo above
and  Ivan's watercolour homage to Horst and his dachshund Maxie. 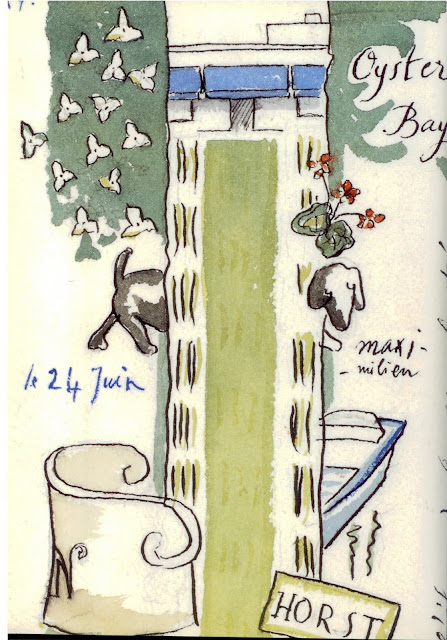 Ivan's drawing of the property

One of my favourite of Ivan's photographs is below-
Two marble chairs, made for Napoleon's Venetian palazzo by a stream
(both depicted in the drawing) 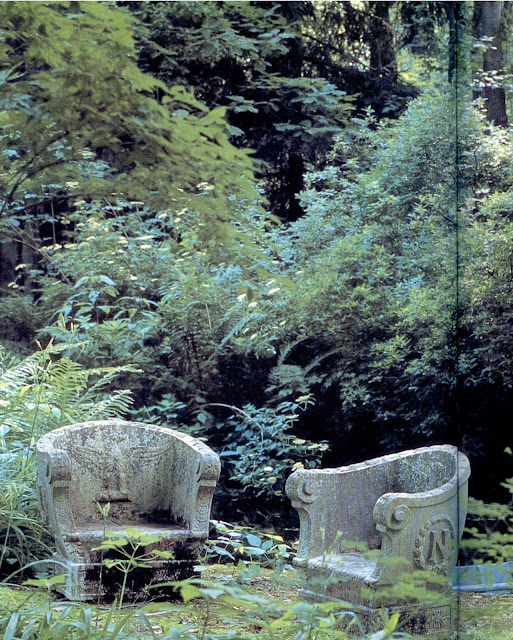 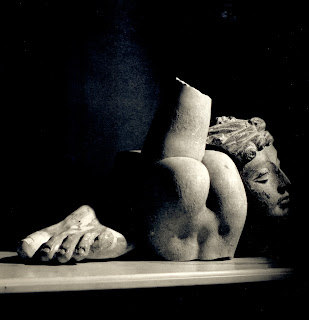 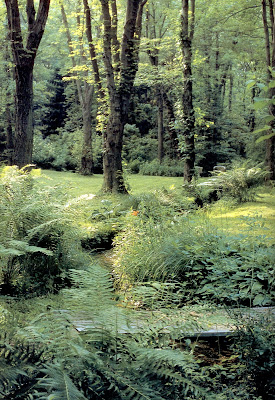 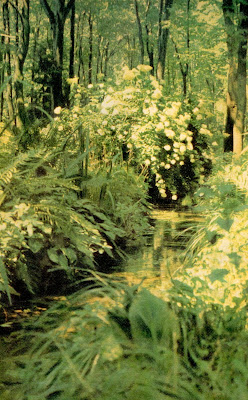 'As one gets older, there are fewer and fewer plants one doesn't like.'
Horst photograph
One of Five radiating allees- the Center allee
lined with yews and hemlocks 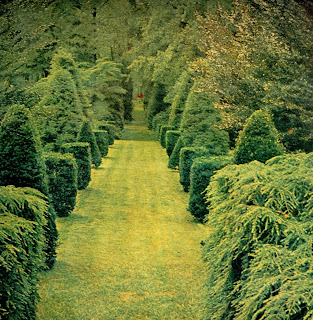 When Timothy Mawson author of  The Garden Room interviewed Horst he asked:
What he considered the greatest luxury in life?- Horst replied :

"Simplicity"
(One might add-)
& an eye for beauty.
.
*The Garden Room by Tim Mawson.
Read the little augury interview with Ivan here
add'l Horst photographs from HORST, Sixty Years of Photography- Kazmaier
.