Some stories never get written. Perhaps that is why so many of us crowd the internet with our own stories-what are we leaving behind? Pouring through books, shelving them, having them settle inexorably in our minds. The authors have written their stories, what do we take from them? Cecil Beaton's story of his beloved country home Ashcombe is one book that recurs in my mind's eye. What did the bon vivant say about...? This? That?

His stories are always about the people in his life-characters-real characters: Rex Whistler, Edith Olivier- two that inhabit the story & seem to form the spine of the Ashecombe narrative. His constants-as it were.


Conversation-piece at The Day House
1937, by Rex Whistler
Edith Oliver perched on her daybed- though the other Players are unidentified- they are likely Beaton, seated with Olivier, Ottoline Morrell, opposite, and perhaps the painter himself.
The ever knowledgeable Toby Worthington tells me- they are Lord David Cecil, Olivier, Ottoline Morrell and Rex Whistler- (where was Beaton? behind the camera, perhaps.) 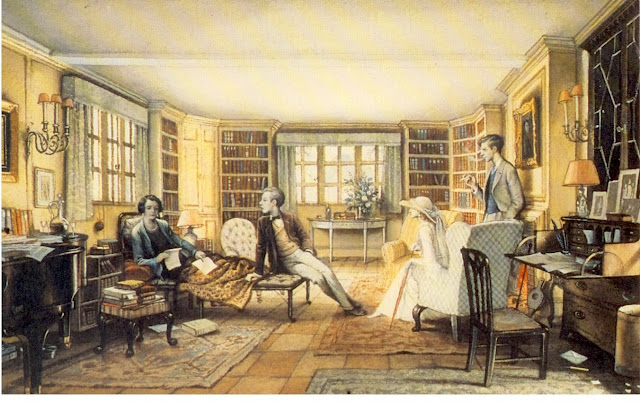 Edith Olivier- charming mayoress of Wilton, Rex Whistler and Beaton took off on a joy ride while the two men were staying with Edith at her Dayehouse in Wiltshire-only to find themselves amongst the pages that would be Cecil Beaton's beautiful tale of Ashcombe- The Story of a Fifteen Year Lease. 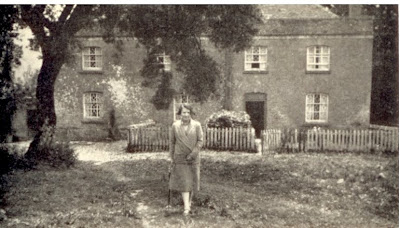 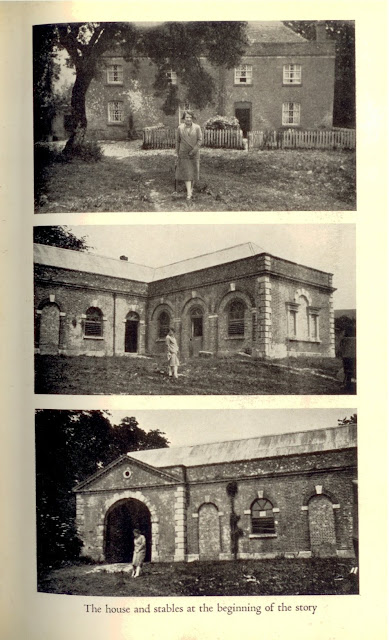 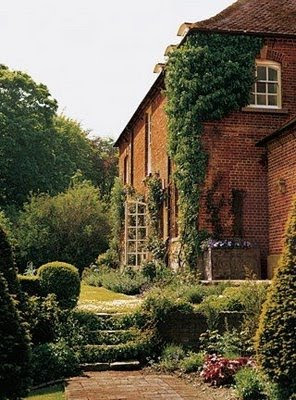 Though a stream of players would enter: Morrells, Sitwells, Cecils, Johns, and exit-an Olivier and a Whistler-and their friendship with Beaton were Ashcombe's brightest stars. Beaton dedicates the book- "to the memory of EDITH OLIVIER who brought me to Wiltshire: 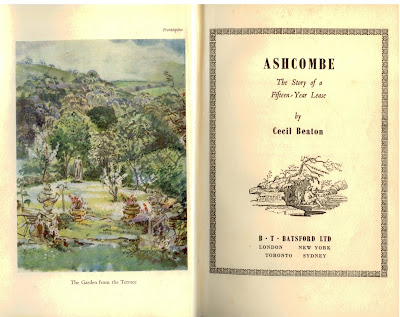 from the 1949 Ashecombe The Story of A Fifteen-Year Lease

The Garden from the Terrace
by Cecil Beaton 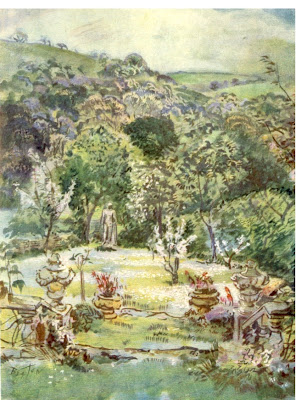 "Of the neighbors on whom I grew to rely more and more, Edith Olivier was perhaps always the most cherished...& so largely responsible for my having blossomed into a happy adult life." Her close proximity deprived Cecil from her company as his weekend guest- "I would refrain from asking other guests, for selfishly I wanted to keep to myself the benefit of her company. Edith was always at her greatest advantage when a deux."

As the pages of Ashecombe receded in my mind, one day-this appeared. 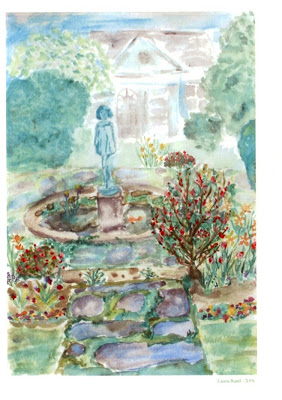 A delicately painted notecard from a dear friend. Who was responsible for the magical garden watercolour? It struck me- a Cecil Beaton watercolour of Ashecombe? Was this another?
Not so.
The artist is the vibrant daughter of the note's sender.
Where was Ashecombe?  To the shelves with other of my Beaton books- & off it came.
Ah ha! Yes. There was the same distinctly atmospheric handling of a scene. Just enough detail to make it memorable. Both watercolour scenes of, as Beaton put it so well, where he blossomed into happy adult life. For Beaton, Ashecombe, for Laura-Chatam Hall. Her continued rite of passage from there to college and now a graduate-returning to Chatam Hall this autumn to start a career. I marvel at this daughter of my childhood friend and her siblings-as they travel through so many passages- marriage, motherhood and the loss we must all suffer inevitably as adults.

Beaton in the Circus room,posing in an 18th-century-style jacket, with surreal touches,
for a fete champetre, hosted at his country house, Ashcombe. 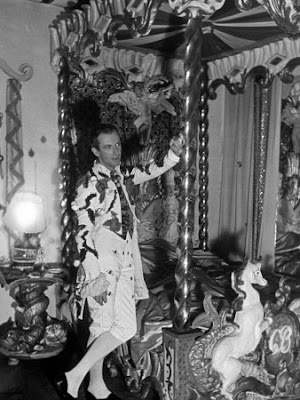 Rex Whistler stood by Beaton as constant friend within the many pages of Ashecombe. The friendship of the two- Rex and Edith- was a part of the story as well. Rex "made Edith's Dayehouse his second home. He often told me that he was happier there than anywhere else." He confided in Cecil his fears that he could not survive the sudden loss of Edith-were something happen to her. An Ashcombe Sketching Competition between the two friends  was judged by Olivier. "Rex reflected an extraordinary atmosphere of serenity and quite continuum. It was a sweet Auburn sense of life that he liked and always seemed to create." 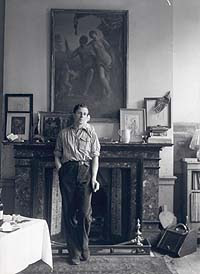 Rex Whistler ,photograph by Howard Coster, from the npg

The eighteenth century was his inspiration" and his work said Beaton, "contributed much to the taste of the twentieth century." What might be a labour for other artists-Rex "flicked off expertly in a few twists of his pen." 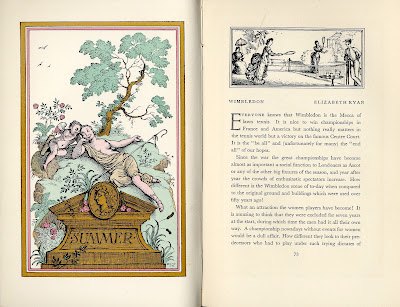 Whistler's distinctive style
Parties and tableau were so much a part of the Ashcombe set, characters floating in and out, moving off stage and with the onset of the war, Ashcombe's idylls waned. Rex enlisted, Edith threw herself into the war efforts in Wilton. She chronicled her experiences beautifully in Night Thoughts of A Country Landlady & presided as Mayor of Wilton. 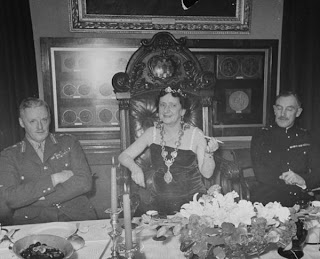 Edith Olivier as Mayor of Wilton 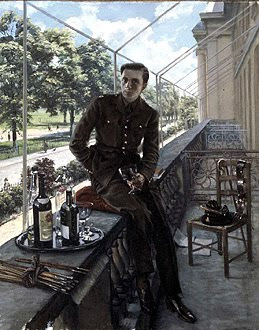 Cecil's return from his travels during the war found Edith much the same, somehow though her dark black hair, such a part of her gipsy persona, had turned pure white. Beaton feared Edith had become a staid spinster.  After a few  minutes of talk, he saw no other marked changes. His fears that their cherished Rex would not return from the war were realized when news came-Rex had been killed in Normandy. "I have never ceased to mourn his death... I am continually wishing for his delightful company, his views on character and people, and his suggestions on a thousand details of taste and decoration."

It is often the case as we see our own stories go off course- characters exit suddenly without saying goodbye- Our loss palatable. We cherish the illusion that we might go on for ever. (from Beaton Ashecombe)

"Love , marriage, death, the passing of a house-these things are the milestones of life and they point a finger to the clock. The expiration of my lease was as a milestone which indicated that a lump of my life had passed in a timeless flash." It can not go on forever.