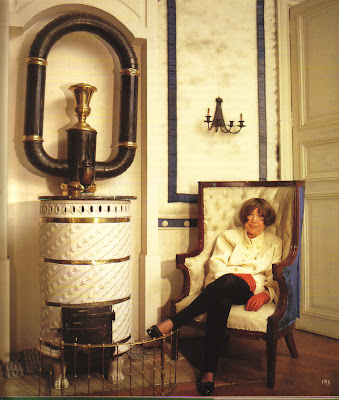 This summer, I had the immeasurable pleasure of meeting Emily Evans Eerdmans. Emily is a like a spring breeze, fresh , young- cool. To say formidable implies- imposing. She is not- in the least, but her credentials and the stack of book she has written is beginning to pile up. Her latest book , The World of Madeleine Castaing ,due out mid October , will  exceed all expectations-Trust Me. It is already at the top of my gift list and I will tuck away a couple for myself.

I had the pleasure of previewing the book and asking Emily some questions this week. (her responses are in RED.) 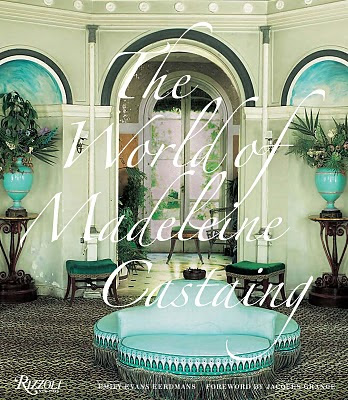 You have been unearthing Castaing’s work for your book for how long? It is interesting to think, every designer with any name recognition today already has a book published. Would Castaing have done a book of her own?

Researching and writing the book has been about a two year process. For some reason, it was much tougher than my other projects – perhaps because it’s a biography of sorts, and there’s pressure to be true to her essence.
It’s funny you ask about why she didn’t already have a book out on her work. First and to be honest, I initially felt how dare I, as a non-French person, be the one to write about this icon? Castaing’s grandson commissioned a wonderful biography on her, but the few photos included were small and in black and white. I think perhaps Americans are more interested in these design books than the French, and secondly, I recently had a fascinating conversation with Will at Archivia books.


We were talking about how strange it is that a current living legend hasn’t put out a book on his work yet. And Will said something very interesting – he doesn’t need to! While I was bemoaning the fact that some designers, who are still in the beginning of their careers, are putting out book after book – when really, do they have that much to say yet? Will pointed out that it is basically a sales brochure - a way to get clients and build the brand, something someone at the pinnacle really doesn’t need.
Would Castaing have done a book of her own? It seems she was always “on”, why didn’t she think of it?


If Castaing was still alive, would she have put a book out? On the one hand, she didn’t like to label herself as a decorator and she may have seen something crass about putting out a book herself… however, she did have a healthy ego AND she was a merchandising pioneer, so it’s hard to say.

Your blog might be better than any book you could ever write. Going back through it –there is a treasure trove of MC information. According to EEE- “MC greatly admired the taste of Napoleon's consort Josephine, and so a closer look at the various residences of the Imperatrice is on my to-do list.” Where did you Castaing Investigation take you? 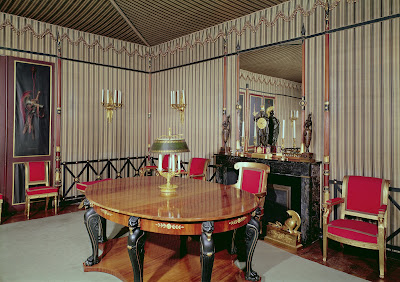 The Council Chamber at Malmaison
It truly is all about the people you get to meet and the rooms you get to see! I had the great fortune to tour Castaing’s Paris apartment which was owned at the time by James Ivory, and I believe was recently sold. I interviewed Mr. Ivory who gives a great interview, and of course Jacques Grange, who I do believe to be one of the greatest living interior designers, in his beautiful headquarters on the rue du Faubourg St Honore. 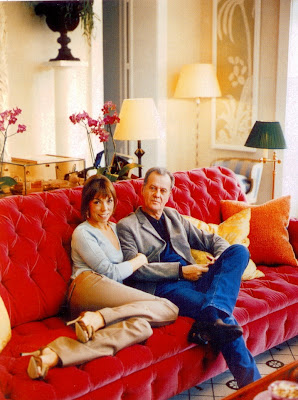 Jacques Grange with client Mathilde Agostinelli
(his rooms decorated for MA with a touches of Castaing)
The English version of his book had just arrived and he was very proud of the fact that all of the projects looked very different, that you couldn’t tell the same person had designed each one, which is very much unlike Castaing who definitely had a vocabulary of patterns and colors that she used over and over again.
I also visited the house of Carole Weisweiller, the daughter of Castaing’s first important client, and it was wild recognizing so many furnishings from her parent’s house featured in magazines from the 1940s reinstalled. Castaing’s longtime assistant Laure Lombardini was extremely elegant and loyal. It took a few meetings for her to gradually give more and more details. Even though she lives very close to the old boutique which is not the famed patisserie Laduree, she refuses to go in.

Carolina Irving recalls getting fleas at Madame Castaing’s and her lack of tidiness-she described it as “filth”. If you want to save that dirt for the book , fine. What it does point to is an idea I have about putting icons on a pedestal and somehow dehumanizing them. Why do so many people romanticize Castaing? 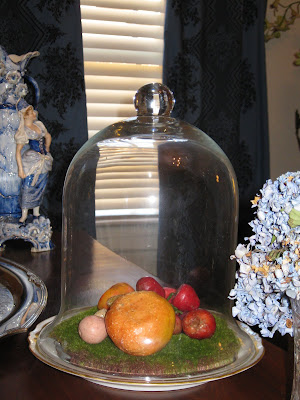 if a little dreaming is dangerous,
the cure for it is not to dream less,
but to dream more...
to dream all the time-
Proust 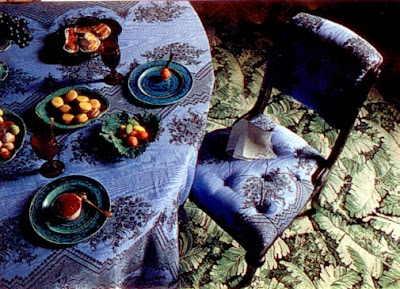 Her rooms were like settings out of a fairy-tale, and maybe sometimes the forest overgrew here and there, but that added to the charm. It was all about feeling life in a room, and she understood that imperfection and even a splash of kitsch or ugliness injected energy and soul to a space. There are quite a few accounts that suggest she wasn’t a paragon of virtue, and she has been compared to Coco Chanel in that she did what was needed to make things happen.
Recently on your blog you wrote: “Madeleine Castaing didn't buy Important or Fine French Furniture, but rather what charmed her.” I love this philosophy. What is your most recent purchase that charmed you?


I just bought several bunches of daisies at the bodega across the street. I tried vase after vase, and cut them down inch by inch, until finally I put them in a Castaing blue cachepot and bam! 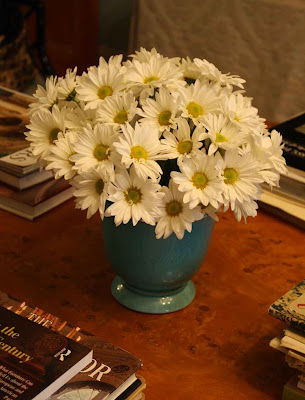 It’s sort of crazy how happy they make me. They sort of remind me of one of those swim caps from the 1950s with the plastic flowers.

Can you talk about your comment on this OUT TAKE from the book that you posted on your blog. “Seeing the evolution really gets me going, and it was a bit heartbreaking that this photo couldn't make it in as I think it is quite important.” Since it isn’t IN tell us why and what makes it an important part of the story? 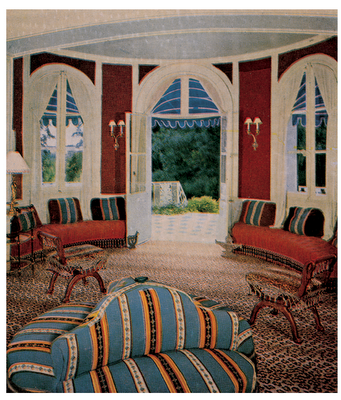 The photo is of the central bay of the salon de la rotonde at her country house, Leves which was without a doubt her masterpiece. To see an earlier incarnation of this space, with the red velvet walls, gives a glimpse into how her taste changed and into how she evolved the space. It also explains why there are red velvet banquettes in that space, which always seems arbitrary to me but now I know they were a hangover from matching the walls. I think it’s also interesting to see that although she may have changed colors and patterns, the space is essentially the same. Once she liked something, she was done, and room could keep the same decoration for decades. 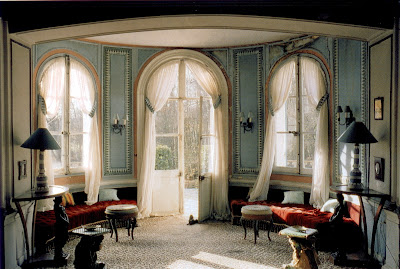 This Francine Weisweiller (Mme Alec Weisweiller) room by Castaing seems to me- too fantastic- to be an OUT TAKE- but you did explain there were printing problems- Alas, So is this a typical Castaing room?
If so- why?
If not what makes it different? 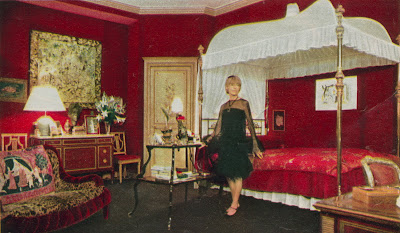 The red velvet walls juxtaposed with the fresh white organdy dressed bed is very Castaing as is the circular “borne” or “indiscret”. But the very fancy 18th century commode and chairs are more formal than typical of Castaing and are probably Francine’s family furniture.

On the blog, You explain Francine's husband Alec Weisweiller hired the brothers Barroux “to fit out the main reception rooms of the house, including the dining room and salon.” How do you think or do you know how M. Castaing felt about that?

Well, even in those two rooms Castaing was able to insert herself. The dining chairs were from her shop, and then convinced Francine to put another “borne” right in the middle of this formal 18th century room which greatly annoyed Alec.


Can you reveal the secret message written on the mirror in M. Castaing's bedroom-sitting room? Or is that secret for the book only? 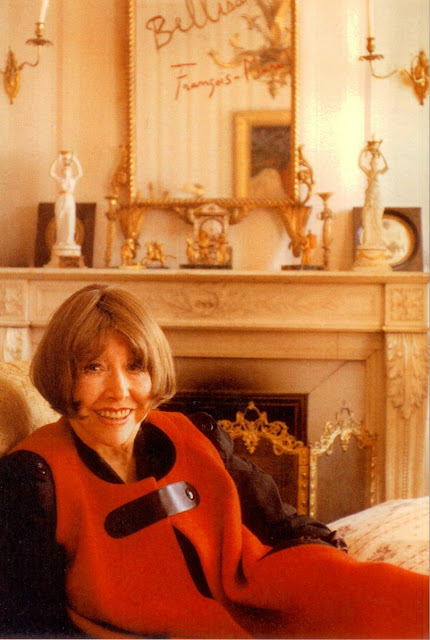 Of course!  Francois-Marie Banier wrote Bellissima - "Most Beautiful" in red lipstick on her mirror - he was a Harold to her Maude, a very close friendship made after her husband's death.  He incidentally was Jacques Grange's boyfriend at the time which is how Grange met her, and is in the middle of the huge European scandal concerning Liliane Bettancourt, the richest woman in Europe....
Is there an equal to Castaing today- a true eccentric in Interior Design and or in Fashion taste as well?

Wow, that’s difficult. I generally feel more comfortable assessing dead people…. The first person who comes to mind is Hutton Wilkinson. After the big Christie’s Tony Duquette sale, Dawnridge had a lot of bare spots. In the great double height living room, Hutton showed me that these gorgeous mirrored roundels mounted on the walls were actually hub caps.


Who are your own style icons?

Sartorially, I love the swans of the 60s – Babe, CZ, Marella – the impeccable Hitchcock blonde
Personally, I find tremendous inspiration in people like Hutton and Albert Hadley who are tremendously talented, but still curious and interested AND – maybe because I’m from the Midwest – just plain nice and well-mannered.


What are your reading right now and did you finish Proust?

Sigh. I actually made my intern skim Le recherche for descriptions of interiors – which I probably should not admit to. I did however manage to finish Paul Morand’s heavenly The Allure of Chanel which is a very easy and wonderful read. I’m in the middle of Michael Taylor by Stephen Salny and the memoirs of Madame de la Tour du Pin. Her mother was a lady in waiting to Marie Antoinette, and she lived to survive the Revolution and observe Napoleon and Josephine – very simply and beautifully written.


You have seen many rooms-What is the most memorable?


Well, it is impossible to pick just one. The Brighton Pavilion – which is just spectacular in its outrageousness; the intimate elegance of Malmaison is perfection. 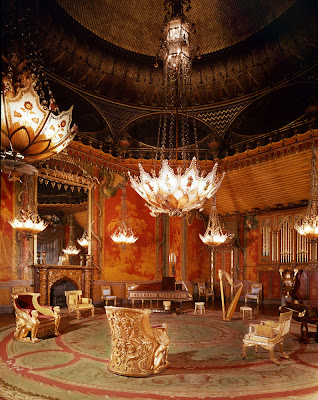 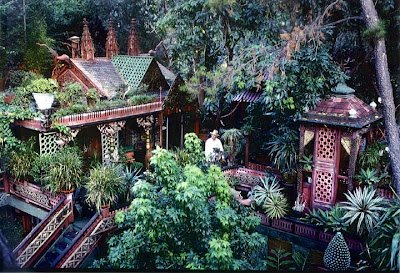 I somehow envision you dressing in the le style Castaing for your lectures, Is it a bit tempting ? 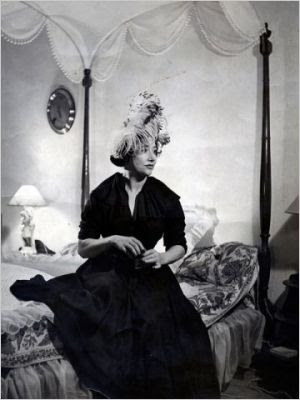 Have you had the urge to tie a few silk flowers or leaves about your head before you head out the door? 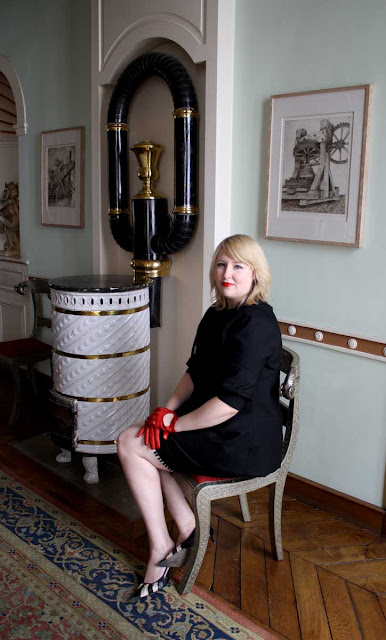 As a matter of fact, I do have a pair of Castaing shades I’ve been thinking of having a Scarlet O’Hare moment with. Chances are you may see me sporting a pair of red leather gloves around– why did we ever stop wearing them?

RIZZOLI here with all about  The World of Madeleine Castaing written by Emily Evans Eerdmans, with a Preface by Frederic Castaing and a Foreword by Jacques Grange.