a poem by PROUST 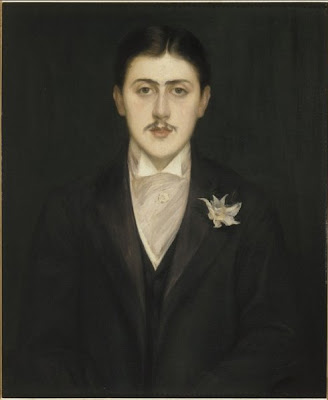 " Narrative Art, the Novel-from Murasaki to Proust, has produce great works of poetry.
Slowly poetry becomes visual because it paints images, but it also musical.
It unites two arts into one."- Eugenio Montale.

It could not be more so than with Proust.
"What was once chic is now trashy Mme. Swann is a creature of fashion. She is passionately devoted to her aesthetic ideals, even if they are continually changing." ( Eric Karple from Paintings in Proust ) 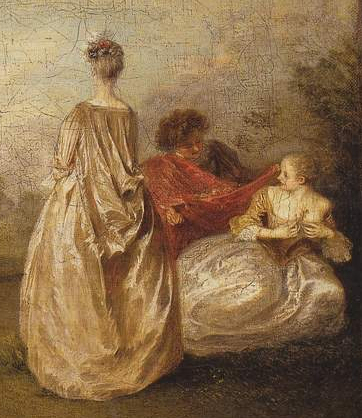 detail of 'The Cousins' by Watteau 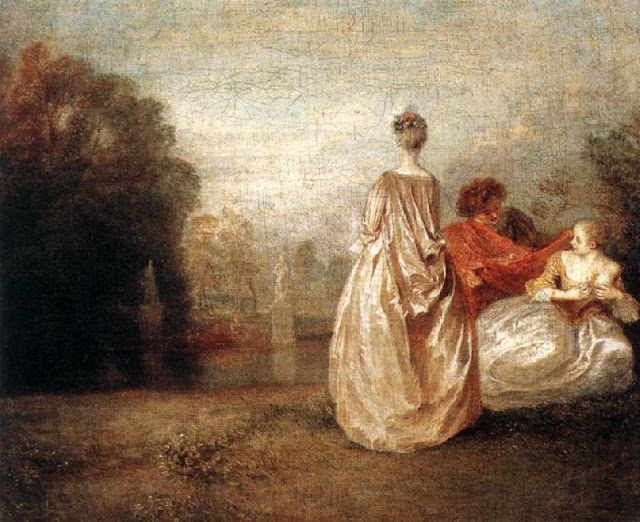 ""Nowadays it was rarely in Japanese kimonos that Odette received her intimates, but rather in the  bright and billowing silk of a Watteau housecoat whose flowering foam she would make as though to rub gently over her bosom, and in which she basked, lolled disported herself with such an air of well-being, of cool freshness, taking such deep breaths, that she seemed to look on these garments not as something decorative, a mere setting for herself, but as necessary, in the same ways as her 'tub' or her daily 'constitutional,' to satisfy the requirements of her physiognomy and the niceties of hygiene. " 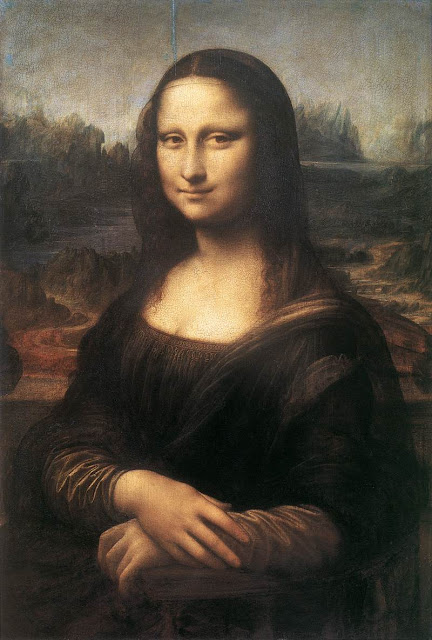 'La Gioconda'  Leonardo da Vinci
"She used to often to say that she would go without bread rather than give up art and cleanliness, and that the burning of the 'Gioconda' would distress her infinitely more than the destruction, by the same  element, of the 'millions' of people she knew. "


“The year before, at an evening party, he had heard a piece of music played on the piano and violin. At first he had appreciated only the material quality of the sounds which those instruments secreted. And it had been a source of keen pleasure when, below the delicate line of the violin-part, slender but robust, compact and commanding, he had suddenly become aware of the mass of the piano-part beginning to emerge in a sort of liquid rippling of sound, multiform but indivisible, smooth yet restless, like the deep blue tumult of the sea, silvered and charmed into a minor key by the moonlight. But then at a certain moment, without being able to distinguish any clear outline, or to give a name to what was pleasing him, suddenly enraptured, he had tried to grasp the phrase or harmony — he did not know which — that had just been played and that had opened and expanded his soul, as the fragrance of certain roses, wafted upon the moist air of evening, has the power of dilating one’s nostrils." 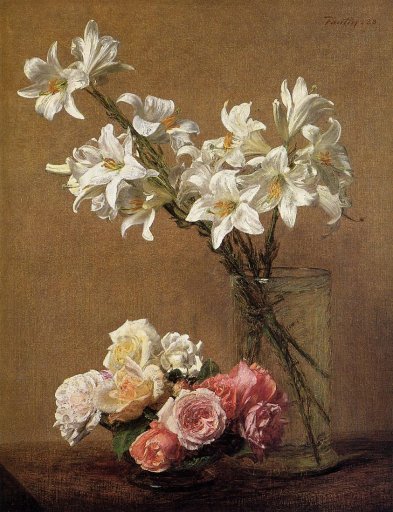 An old cetifolia rose from the days of  Victoria or before, carries the name Rosa Fantin Latour. Its intoxicating fragrance must have been what -like the music- stirred Swann's own soul.  The rose is named after painter Henri Fantin-Latour.


"He would rap on the pane, and she would hear the signal, and answer, before going to meet him at the front door. He would find, lying open on the piano, some of her favourite music, the Valses des Roses, the Pauvre Fou of Tagliafico (which, according to the instructions embodied in her will, was to be played at her funeral); but he would ask her, instead, to give him the little phrase from Vinteuil's sonata. It was true that Odette played vilely, but often the most memorable impression of a piece of music is one that has arisen out of a jumble of wrong notes struck by unskilled fingers upon a tuneless piano. The little phrase continued to be associated in Swann's mind with his love for Odette."

Proust's Vinteuil Sonata is fictional-but becomes irrevocably attached to Swann in his reveries & reality. Proust's own affection for composer Cesar Franck led him to seek out a string quartet to play Franck's Violin Sonata for him in his private rooms.  Speculation from Proust devotees is that  little phrase  Swann heard was  Franck's. 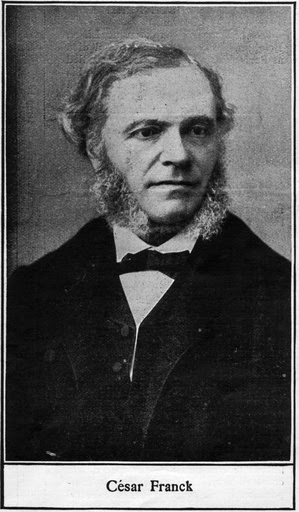