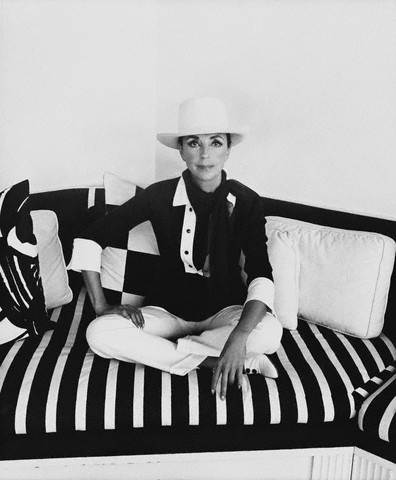 
In an age of swans, she may have been thought of as the Black Swan or-maybe a Shark. Regardless of her reputation-and there is much to consider-but that is another story- another day.  For the moment, I'm looking at her black and white stripe banquette.

Never accuse Gloria Guinness of being tame-she was all about LESS is MORE.

Think about the year-1966- when this photograph was taken by Cecil Beaton. Over fifty years old and still everything is "of the moment." The clothes- the interior- the stripe. For a woman that wanted to be known as "an original"-Gloria Guinness hit the mark.

In W magazine she declared "CHIC? It is absolutely innate, I was born with it. CHIC cannot be taught." 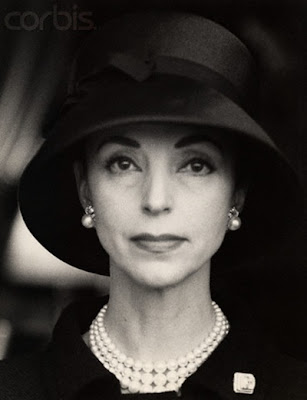 This may be true- and perhaps in the era of this Swan-when information was limited Guinness' definition of CHIC might have been apt. Today CHIC is everywhere. It can be taught-but one must study, study, study-and Guinness is a great teacher.

Lesson I-Less is More.
Guinness was a Minimalist. It carried over-from her pared down fashion- to her pared down interiors.
It seems when she was poor- and she was-she was able to keep climbing the ladder to marital success in a simple black cardigan and skirt.(period) She took her success with that uniform right to her interiors brilliantly for richer or poorer.  I don't think La Guinness was one to keep hovering about a room with a pillow in hand- of say-red or yellow or both- trying to decide where to toss it and hope it lands like spontaneity.

Lesson II- Less can be More.
It also seems though she married well-very well-on her third outing, her husband was Loel Guinness,  held tightly to the La Guinness purse strings.  Friend and writer Nancy Holmes said, " I remember the drawing room in her house in Lausanne was covered in the cheapest chintz you could buy. But she had everything so exquisitely made that it looked wonderful." So obviously- though it may have pained her to admit it- Mrs. Guinness was on the dreaded "budget."

Lessons III, IV, V, VI
Keep it:
classic
tailored
sharp
sleek
&
Lesson VII
Keep it:
simple.
These must have been the only words in her personal style lexicon. Bold words-those. In another photograph Beaton shot with GG and her bold banquette, she wears-again-always classically stylish-a caftan. Of course we love them- and while it might seem GG would have selected a black or white caftan with some hand embroidery-surely she had one-she side steps the obvious and wore another stripe. That's another sign of the CHIC Gloria Guinness oozed-that's the part that is-"absolutely innate," &  she must have been onto something when she said " I was born with it."

What could be more simple-stylish- than a black stripe- make it a wide one- with graphic pillows?  This is one fabric you can find as GG did for cheap-get lots and lots of it- and let it work for you. My best guess is you may find a good upholstery fabric for as little as 20  dollars a yard (cheaper-probably). Of course, there are fine black and white stripes-not exorbitantly priced ones, like the ones from Pierre Frey, one of my favorite fabric houses.  I gathered a collection of Pierre Frey fabrics to exhibit Lesson VII the power of simple. 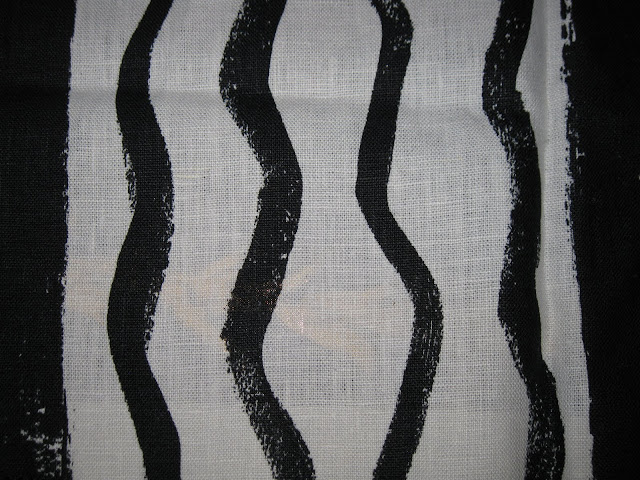 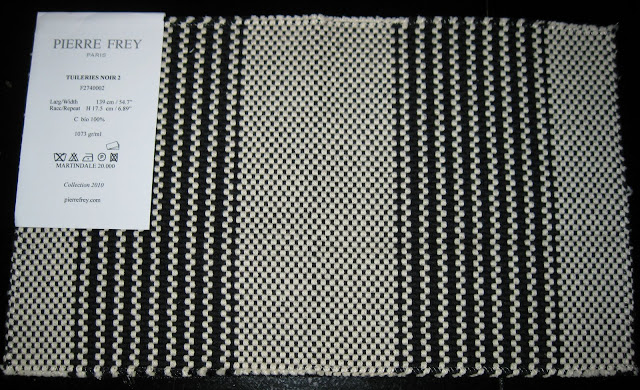 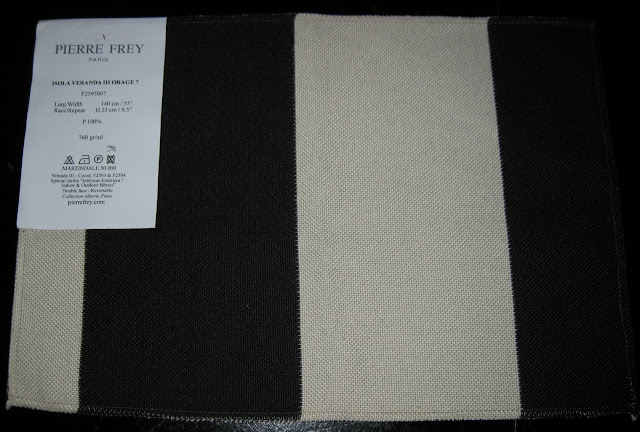 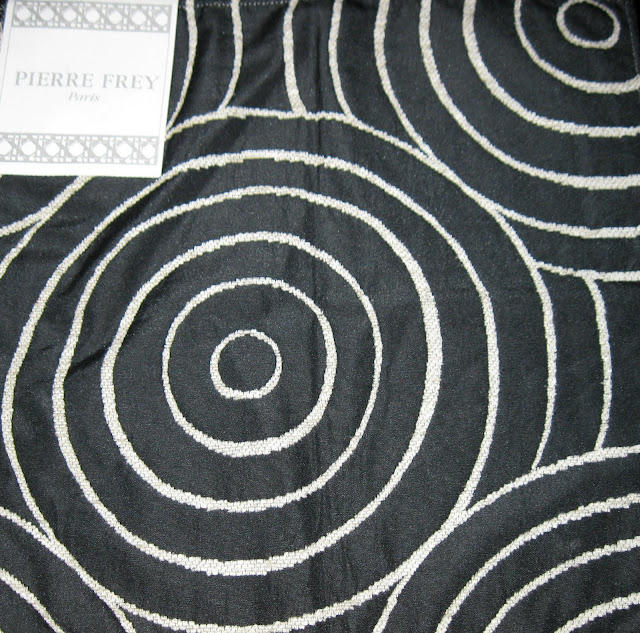 top to bottom: THESSALIER NOIR 01,  a painterly linen stripe with two different stripes within the pattern. TUILERIERS NOIR 02,  a woven stripe-still bold, full of nuance. ISOLA VERANDA III ORAGE 7 another bold stripe-it's reversible, designed by Alberto Pinto, more greige than white but its size outweighs the color. Lastly as a the pattern to accompany your stripe-ELLIPSE/NOIR & BLANC, a series of concentric circles in black and greige.


Along with the graphic bold stripe- Guinness simply added some black and white solid pillows and some in a checkerboard pattern-again bold-probably pieced from solid black and white squares. The statement-along with the stripe-is adding a bold pattern-one of the tricks GG uses that I love.
Lesson VIII Be BOLD. 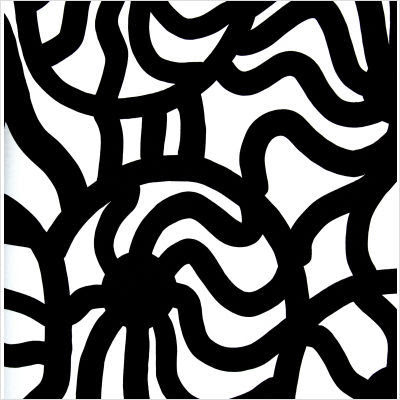 What fabric GG used-I don't know, though the Marimekko fabric JOONAS from the sixties, puts me in mind of it. Adding a pattern like this to a room is always worth the money and "ups the ante." Marimekko also obliges Guinness stripe seekers with a black and white stripe called Juhla-Raita. 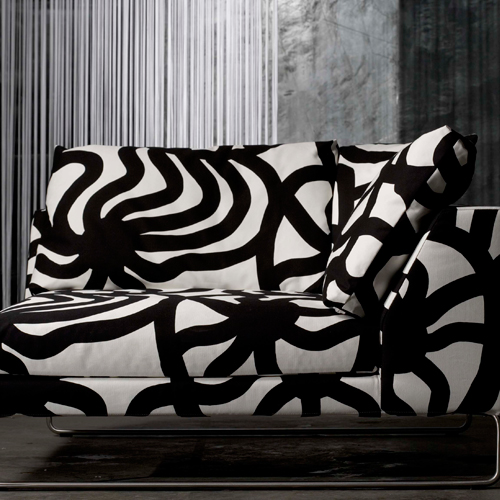 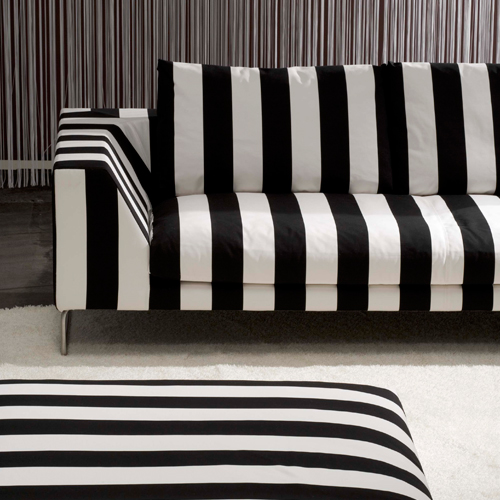 This is the house in Acapulco Guinness dressed in her black & white stripe -the domed "palapa" room of her Acapulco home, photographed in 1972, probably the room we are seeing stripes  in 1966. The  Guinness "palapa" was a thatched-roof, open-sided structure, material to cover the roof of such is usually dried and woven palm-tree leaves. 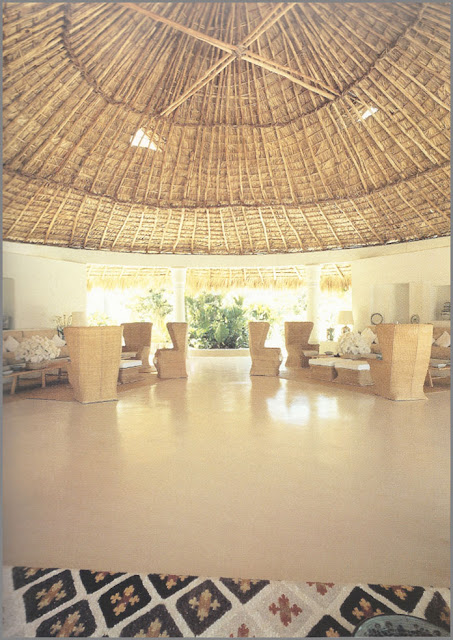 Her style-CLASSIC.
Her approach one note-but- played like a virtuoso. 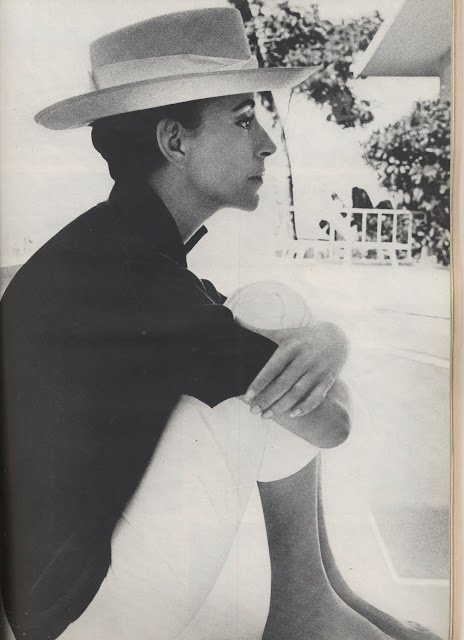 
STILL One of the best resources for reading about women like Guinness is  The Power of Style-by Annette Tapert and Diana Edkins. Most of what we read on the internet about great women of style is sourced from the book- and if you are tuning into the subject of style for the first time-get the book. a contributing editor to Harper's Bazaar from 1963 until 1970. She also was a member of the International Best Dressed List.

Email ThisBlogThis!Share to TwitterShare to FacebookShare to Pinterest
Labels: Gloria Guinness, how they decorated, Textiles