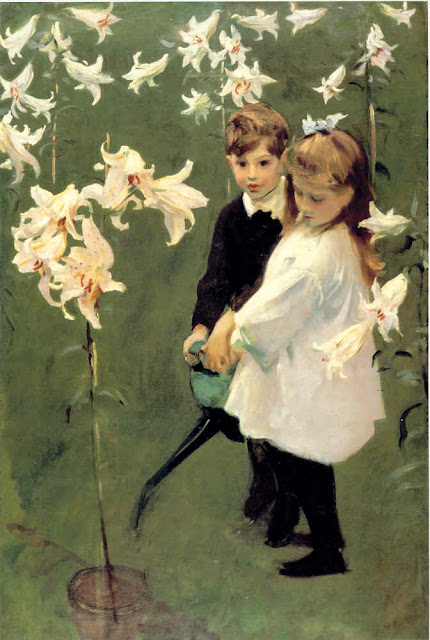 do you think Sargent painted the perfect lily?
one that stood tall, arrow straight, proud, face to the sun? 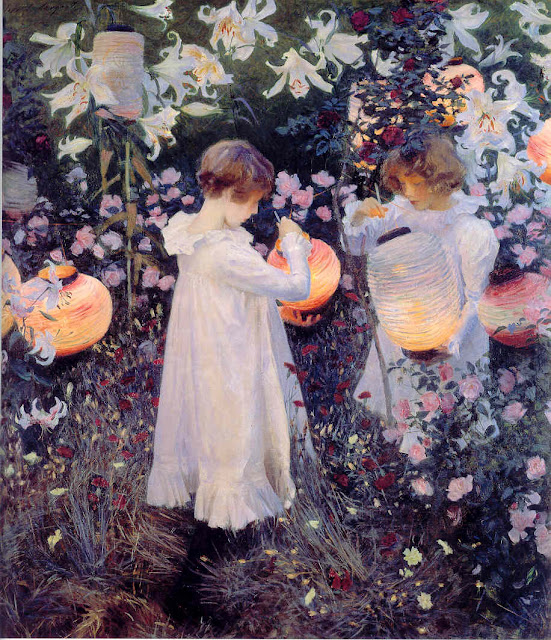 His famous and perhaps most beloved painting "Carnation, Lily, Lily, Rose" is one of those that has captivated the gardening side of me for years-one side that has been curtailed by bad back, bad knee-especially the knee right now-I knew I was not meant for kneeling in this world- maybe the next.

I have an abundance of sun in the front of the yard and though the lilies thrived there two years ago I had a gardener-I now have none. I had envisioned rows and rows-masses-of different lilies. I have added 7 species over the 6 seasons I have been scratching the soil in this place.

Well, this is what really happens to the poor darlings-
stooped over, bent stems,heavy heads,trying to face the sun. 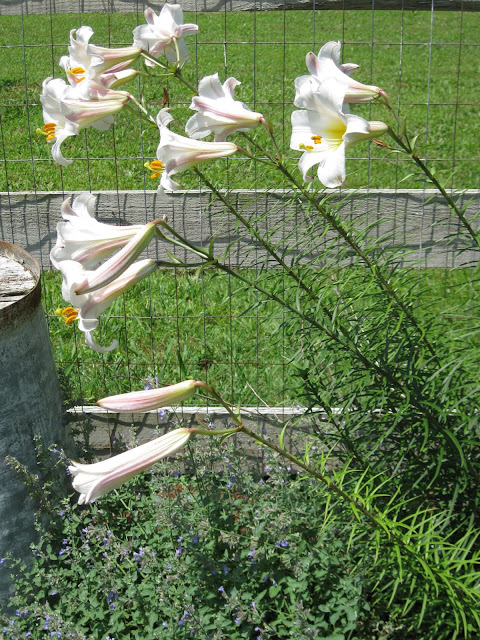 It is my fault-I admit. I do stake them-using handy rods with curls at the top-though when a lily insists on topping out at 4 feet-the rods with curls are useless. Bamboo-though beautiful- does not hold up either.
I wanted the lilies in the back of the house &  moved them to the sunny side of the yard-that yard that is waiting to be a garden- without the help of a gardener. Their destination was not sunny enough, nor I think- large enough to do them justice. 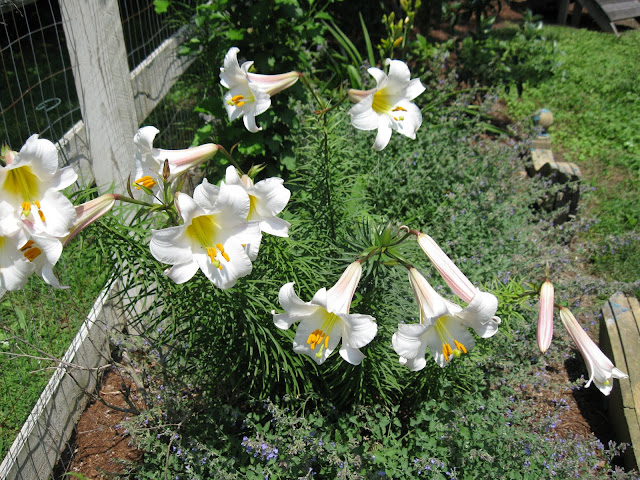 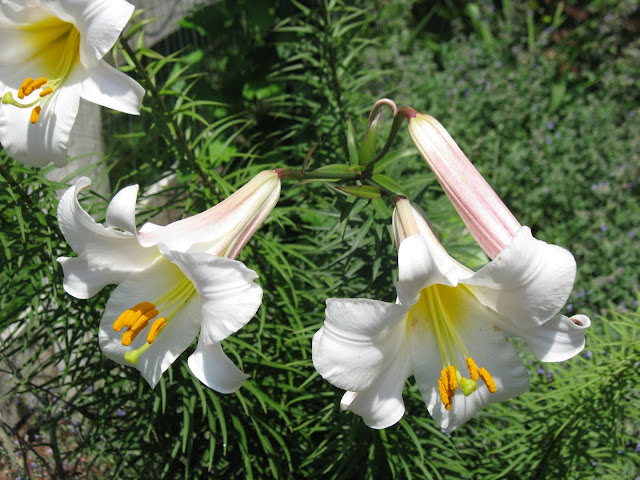 THE FANFARE LILY -the first of the season

a strain comprised of huge flowered, substantial creamy white trumpets with golden yellow to apricot centers. Stronger stems bring fabulous blooms to eye level, and fragrance right to your nose.  They do!  As you can see these lilies are tall- at least 4 feet and rather than their usual bloom time-July, they are the first of the lilies to appear in the garden this year, I noted a June 1st arrival.


Do I move them again?
Some strays were left in the front beds and should be moved. As I predicted that location has been over shadowed by several tall camellias and a rampant climbing Cecile Brunner -in an otherwise very sunny yard. Leaving them in their current spot, I feel, would be limiting them their majesty.
Not allowing them to reach their heights, heaven's just look at those poor little backs!
Moving them would be ideal-if I didn't have to do it, or make the bed they will lie in-or & so on and so forth. I see them along the long run of the fence-but out more- so I can walk around all round & have room to add floaty plants-tall floaty ones- within the bed like the Carnation... the Rose. 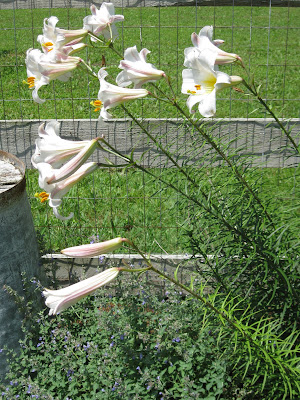 My passion for LILY was fixed after reading Beverly Nichols' garden books and his vivid descriptions of his own bounteous lilies.
Why can't mine be more like Beverly's?
Well actually they could- if- I were to write of them not as they are-but as I wish them to be.  I wrote about lilies and summer scents here last year, I  include the Nichol's quote again-because it is beautiful and I love it.


"that was the moment I first saw the lilies. and that was the moment when, having seen them,I mentally signed the contract to buy the house...I had to possess those lilies...The lilies were a variety known as Regale, and they stood in rows of glistening white down the whole length of one side of the kitchen garden.a faint breeze was stirring, & as they nodded their heads there drifted towards us a most exquisite fragrance.never before, in any garden of the world, have I seen such lilies; their loveliness was literally dazzling;the massed array of the white blossom was like sunlit snow. nor was this shining, shimmering beauty merely the result of mass, for as I walked closer I saw that each individual blossom was a perfect specimen, with a stem that was often four feet high, bearing on its proud summit no less than a dozen blossoms." BEVERLY NICHOLS 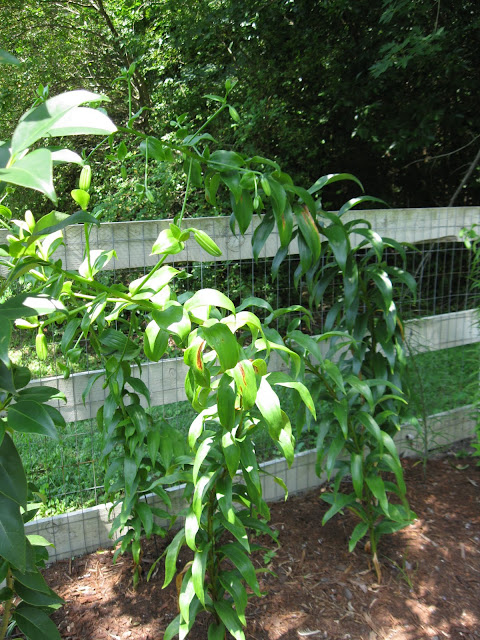 Here, LILIES grace the Sitting Room in a vase 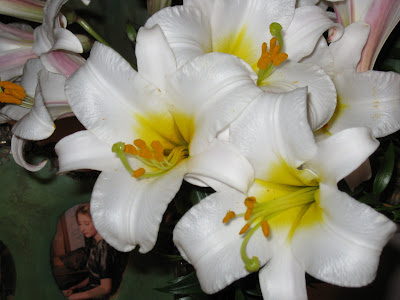 FANFARE went the way of most of my blooms- cut to fill the house with their heady smells-besides I had to spare the darlings, what an awful thought that rain might break their little necks.
But Yes- it still matters that they are beautiful in the garden & in harmony with the Sun & all living things in Nature. 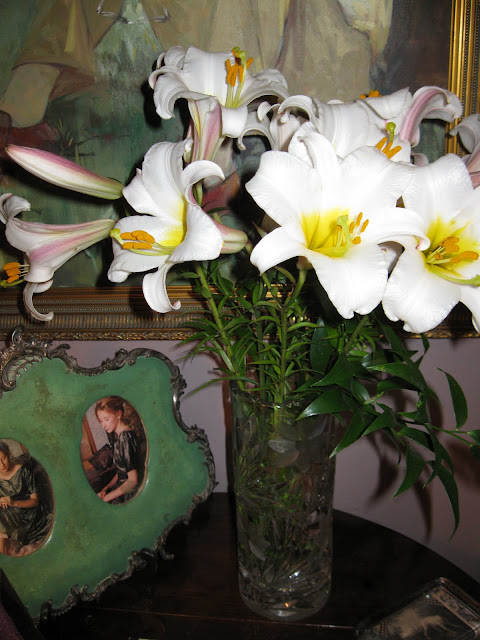 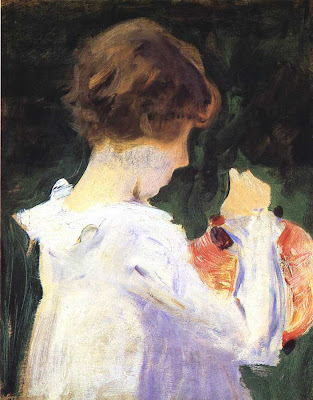 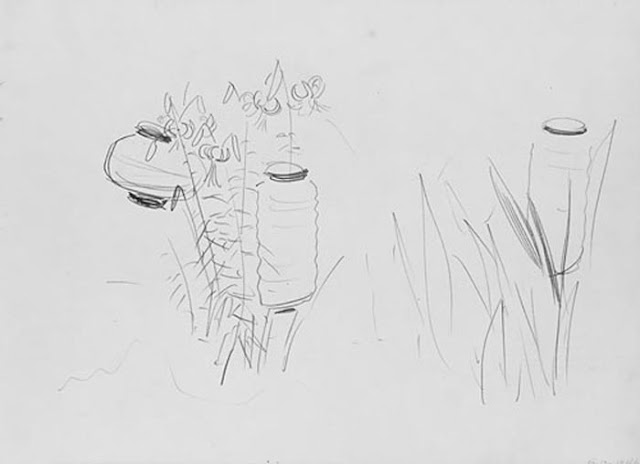 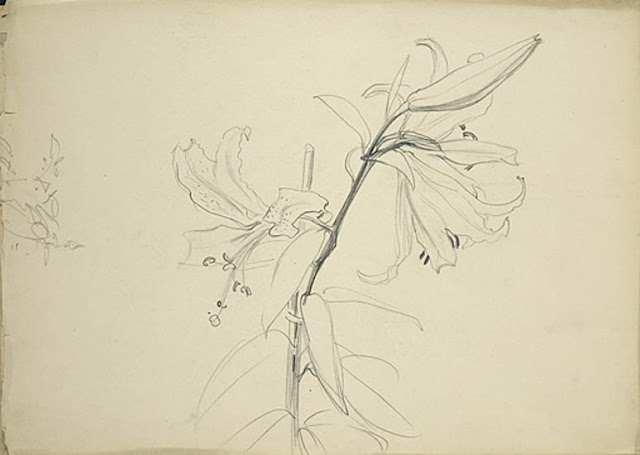 from the letters of Sir Edmund Gosse (here)
The progress of the picture, when once it began to advance, was a matter of excited interest to the whole of our little artist-coloney. Everything was used to be placed in readiness, the easel, the canvas, the flowers, the demure little girls in their white dresses,before we began our daily afternoon lawn tennis, in which Sargent took his share. But at the exact moment, which of course came a minute or two earlier each evening, the game was stopped, and the painter was accompanied to the scene of his labors. Instantly, he took up his place at a distance from the canvas, and at a certain notation of the light ran forward over the lawn with the action of a wag-tail, planting at the same time rapid dabs of paint on the picture, and then retiring again, only with equal suddenness to repeat the wag-tail action. All this occupied but two or three minutes, the light rapidly declining, and then while he left the young ladies to remove his machinery, Sargent would join us again, so long as the twilight permitted, in a last turn at lawn tennis"
"The seasons went from August till the beginning of November "Sargent would dress the children in white sweaters which came down to their ankles, over which he pulled the dresses that appeared in the picture. He himself would be muffled up like an Artic explorer. At the same time the roses gradually faded and died, and Marshall and Snelgrive had to be requisitioned for artificial substitutes, which were fixed to the withered bushes . . . .  In November, 1885, the unfinished picture was stored in the Millets' barn.
When in 1886 the Barnard children returned to Broadway the sittings were resumed. For Sargent it seemed the fun was in the process. Edwin Howland Blashfield recalled that when he saw the canvas each morning, the previous evening's work seemed to have been scraped off, and that this happened repeatedly at each stage.
read more of the painter's story at John Singer Sargent Virtual Gallery here
this is my source for Lilies- none other than the Lily Garden