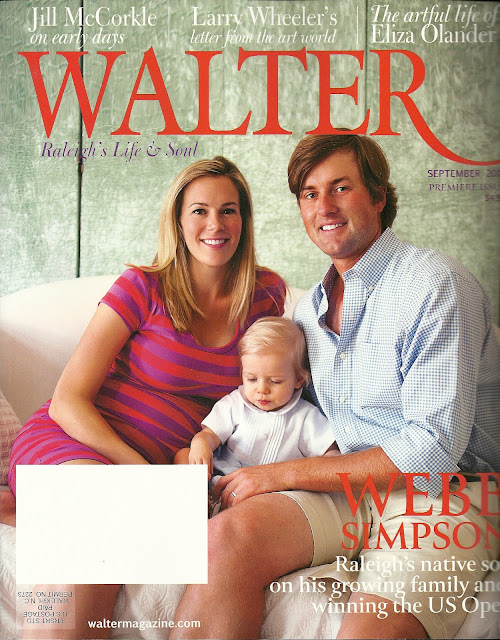 It's a delight to share the cover of  WALTER's debut issue with my Readers. The editor Liza Roberts  asked me to contribute to the magazine on a mostly monthly basis. While that is a delight-more so-is the beautifully revealed magazine Itself.
(Last night Raleigh's CAM was filled with WALTER well wishers celebrating the magazine launch.)
My dear friend Jesma Reynolds has put her infinite talents to handling the Art direction of the whole thing.

My story will have the recurring theme about Houses. Imagine!
Story of a House, it's called, and for my first outing I've shared one of my own projects. It's the story of a house but even more so- the story of a family I've grown to love. Luckily that is usually the case with my clients. Lucky Indeed.

I've read the thing from cover to cover and It's all Good.
If you don't know Raleigh -you'll find that Walter will remedy that and in case you wondered about the name?
Remember Sir Walter Raleigh? He swept the ladies off their feet and landed on the coast of North Carolina in Queen Elizabeth's name, Lost a Colony and ultimately Lost his head, but his bon vivant spirit is evident in the Raleigh today. Walter Raleigh was an aristocrat, writer, poet, soldier, courtier, spy, and explorer- Impressive.
Much of the magazine covers ALL That-and if not in its first issue-there's no doubt it's in the works!


You can find Story of a House here.