.
First Published April 15, 2014
Surrounded by her beloved airedales, Baldur, Undine, and Siren-at first glance Christian Waller looks like a fairy princess. Her life -less so. An artist in her own right, she married fellow student Napier Waller, and both studied at Melbourne's National Gallery School.

"Christian Waller with Baldur, Undine and Siren at Fairy Hills" 1932 by husband Napier Waller
oil and tempera on canvas mounted on composition board 121.5 x 205.5 cm
She was 38 at the time.


Hanging over a massive fireplace in the Waller's Melbourne dining room, the painting is her husband's only major canvas work and mural size (4 feet x almost 7 feet wide). Experts interpret the painting's composition in hindsight, noting five years after the portrait was completed Christian had a breakdown and the couple's marriage suffered estrangement though the pair remained married til Christian's death in 1954.


There must have been moments of sweetness though when Christian was sitting on the lawn of her Arts and Crafts bungalow, fashionably dressed in white, amongst her dogs and some of her own illustrated books. She fidgets with her coral beads -a habit or a possible response to Baldur's barking. The other two airedales are at rest and at attention-completing the framework of the portrait. A heavy draping of willow leaves cools the scene-perhaps casting a shadow on unnamed auguries .

A Study of Christian Waller for the painting

"There is often greater martyrdom to live for the love of, whether man or an ideal, than to die"
Helena Blavatsky, on the Mahatmas 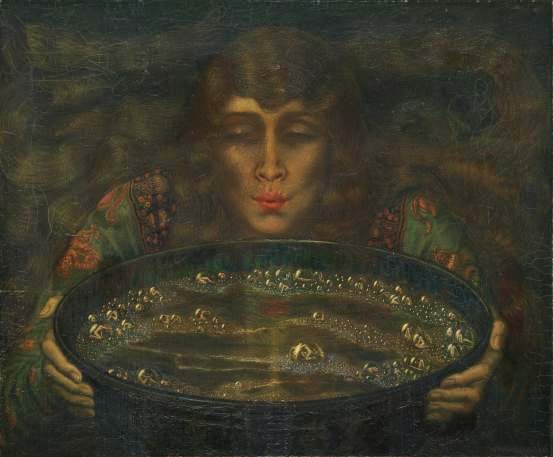 
Christian's own work was influenced by the Pre-Raphaelite and Art Nouveau in the early 1920's. She studied both Classical and Medieval works as a student- all contributors to her maturing style. In the 1930's Art Deco dominated her work-her prints, book designs and stained glass. After her breakdown, she turned deeper into Theosophy-shutting herself off from the world at large. 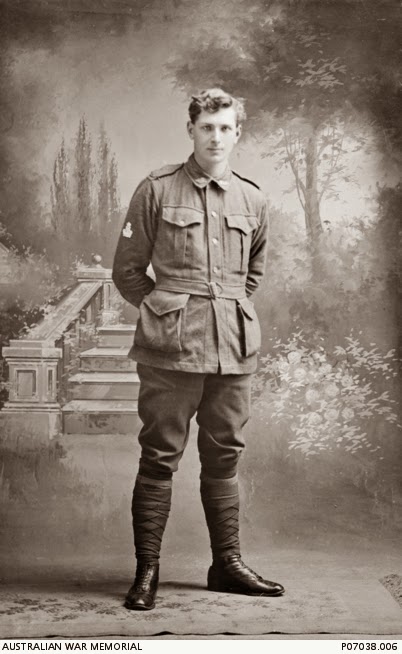 
Napier Waller was a World War I war hero -giving his right arm on the Western Front to the cause. Self taught afterwards-with his left hand, the city of Melbourne has been described as "a gallery of Napier Waller’s work." Working in stained glass and mosaics, Waller completed works for the Hall of Memory at the Australian War Memorial, Canberra, completed in 1958. Along with these compelling works there are eleven monumental Waller murals in the central business district in Melbourne and at the University.


Mosaic and Stained Glass at the War Memorial by Napier Waller 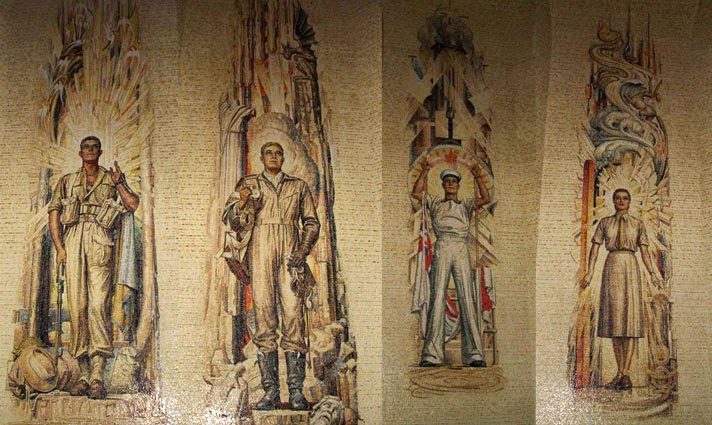 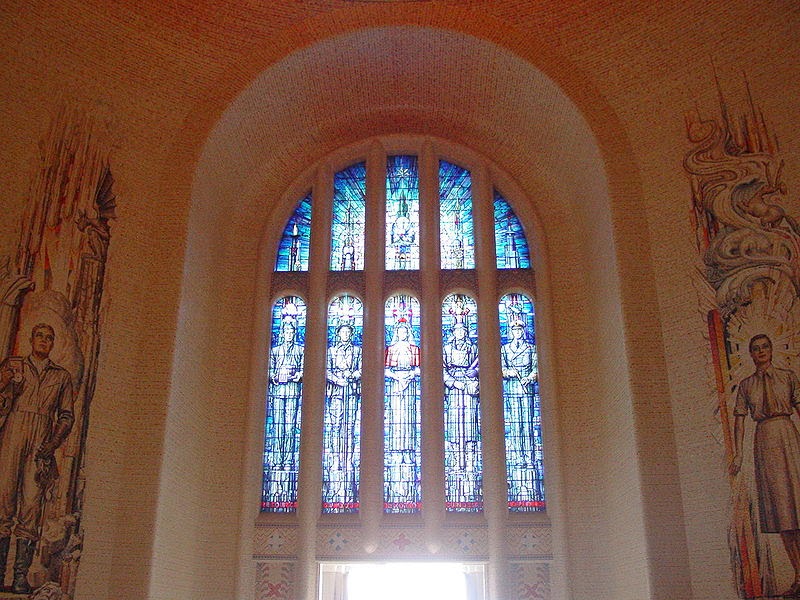 From the naming of their dogs-to Christian's deeply personal work, she devoted herself to Theosophy for the most part her doctrine held to its turn of the century spiritual leader Helena Blavatsky.  Blavatsky's basic tenets are:


There is an omnipresent, eternal, boundless, and immutable reality of which spirit and matter are complementary aspects.

There is a universal law of periodicity or evolution through cyclic change.

All souls are identical with the universal oversoul which is itself an aspect of the unknown reality.

While critics have proven Blavatsky was part a charlatan and her supposed experiences with the paranormal faked- in the world Christian Waller inhabited they were real.


Christian's book The great breath; A Book of Seven Designs (1932), is testament to her beliefs. 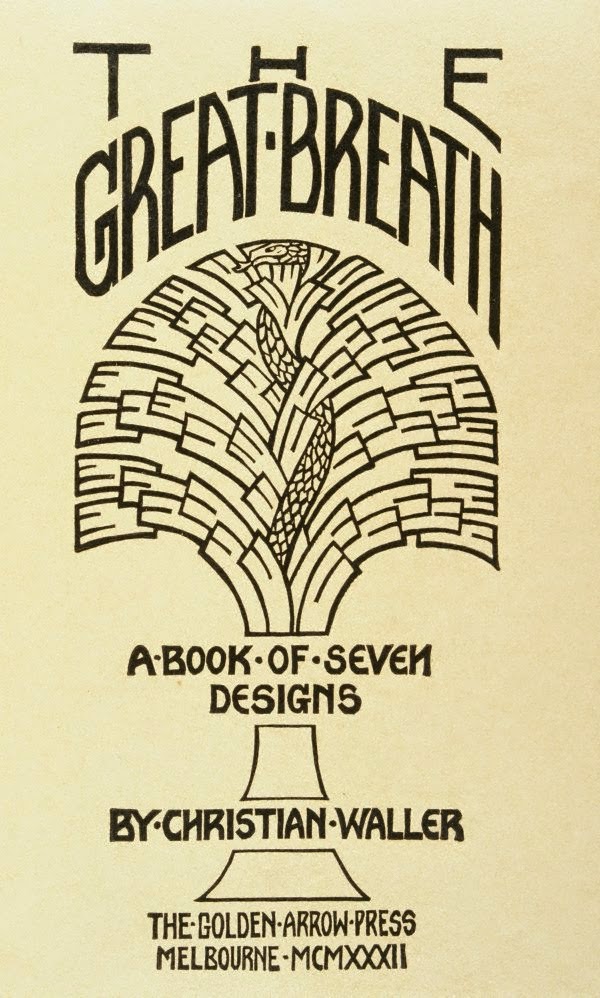 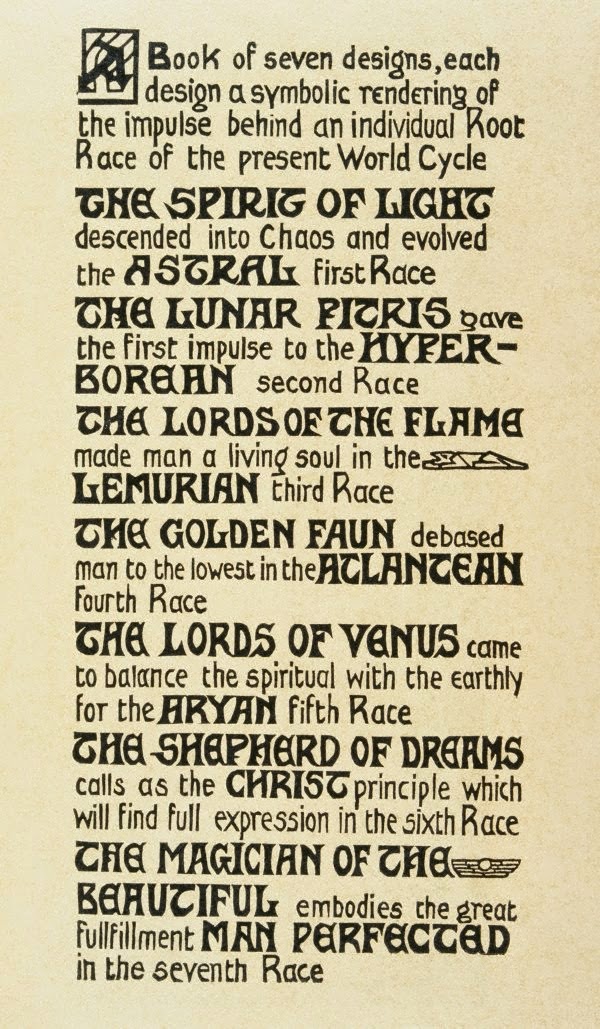 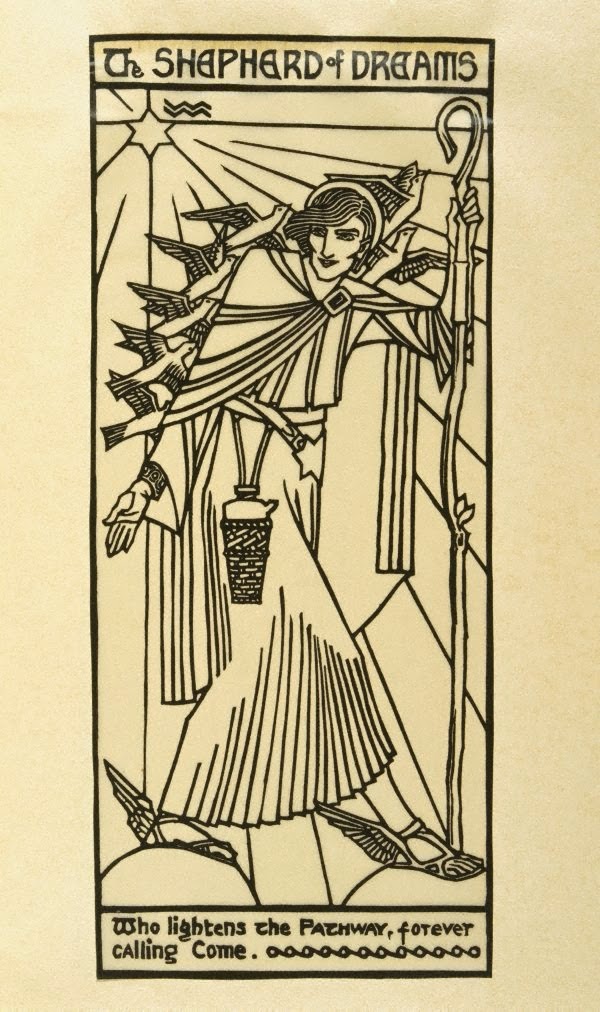 the entire book can be viewed here
"all aspects from the cutting and printing of the linoblocks to the manufacture of the distinctive gold-painted emerald green cover was done by hand. She printed the blocks on her 1849 hand-press in her studio at Ivanhoe, each book taking about four days to make, hand-bound with green cord. Although it was intended to produce an edition of 150, it seems only about 30 were made. 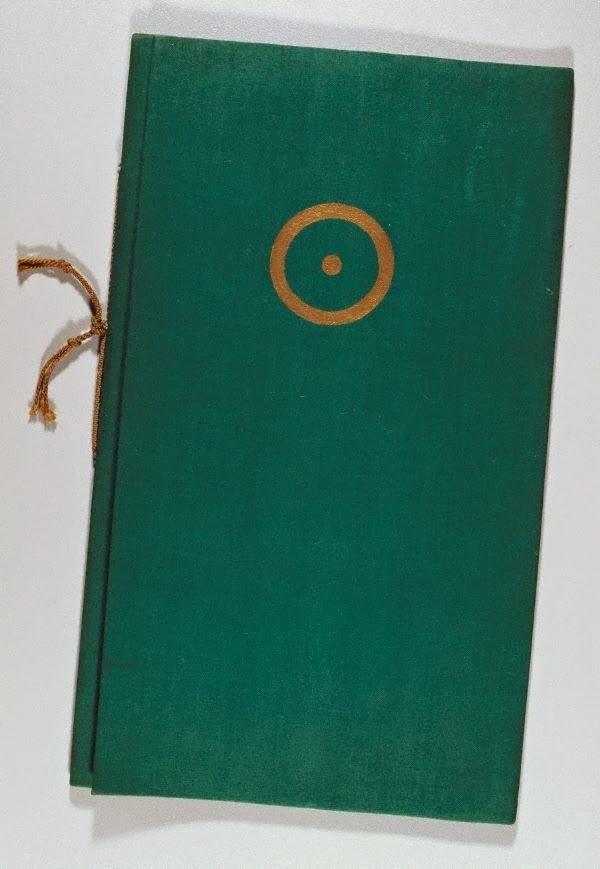 "Everything lives and perishes through magnetism; one thing affects another one, even at great distances, and its "congenitals" may be influenced to health and disease by the power of this sympathy, at any time, and notwithstanding the intervening space." Helena Blavatsky


The charms of the Waller bungalow are only hinted at in Waller's portrait of Christian, but we can imagine it must be so-and are compelled to wander just beyond the willows inside the house... 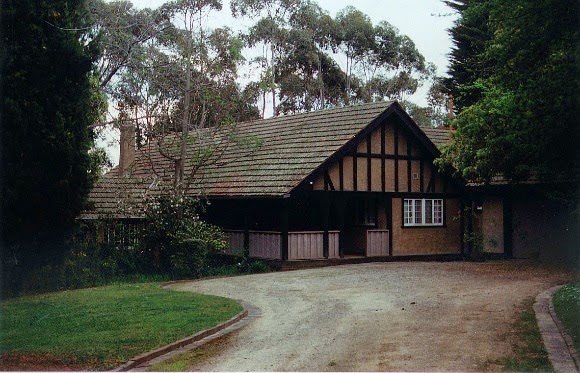 Designed by the Wallers as home and studio, Napier Waller lived in the house fifty years and examples of his art and work, Christian's work, that of his second wife, and Christian's niece, famous studio potter Klytie Pate, remain suspended in time-just as Napier left them. Today the house is a private residence maintained and lived in by a Melbourne antique dealer. 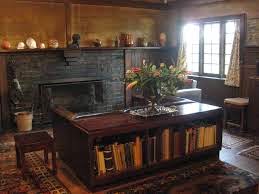 detail of Waller's airedale's from his portrait of Christian

From Steven Miller's book Dogs in Australian Art, we are told visitors to the Waller home remember the first thing they heard was 'Baldur's deep bark and the scuttering of claws on the polished wood floor.' Napier Waller would feature his Airedale in several allegorical murals- the breed seemed to lend itself to Waller's Art Deco palette-so with the Waller's home.

Waller's "The Labours of Hercules" a mural with a self portrait of the artist
in The Blue Room of the Waller House, a guest room with built in glass topped furniture. 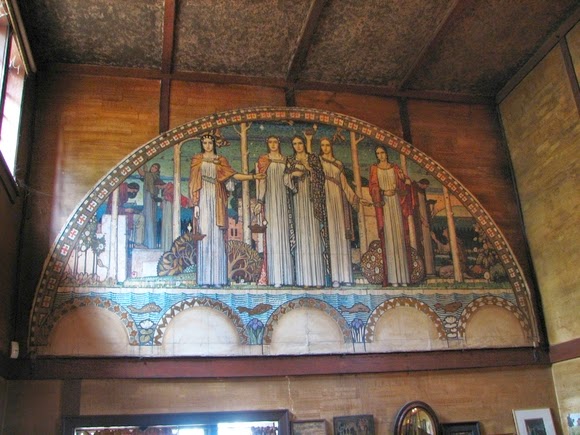 Study for “The Five Lamps of Learning" by Napier Waller


Once acting as their Studio when the house was built, the living room holds Waller's Study for “The Five Lamps of Learning" and  "Peace After Victory." The room is panelled and floored in Tasmanian hardwood, the walls are plastered and finished in a combed wood pattern, and the raftered ceiling is in a marble pattern of gold leaf. There is a musician's gallery overlooking the whole. A coolness pervades in the house-the dark timbers, well worn leather and simple crewelwork curtains echo the Art Deco palette of both Napier and Christian. 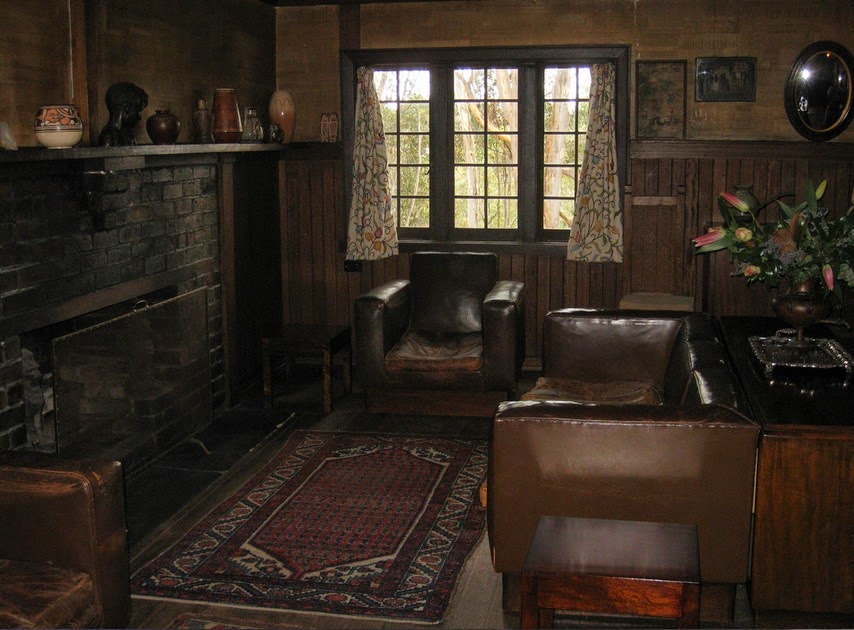 "Peace After Victory"- A Study by Napier Waller 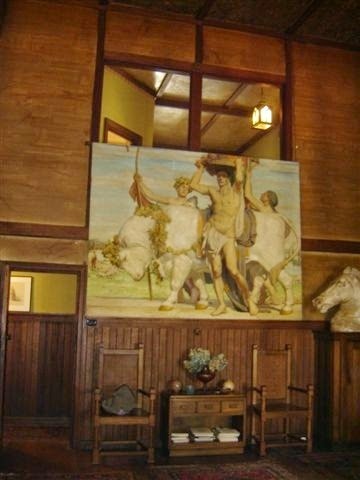 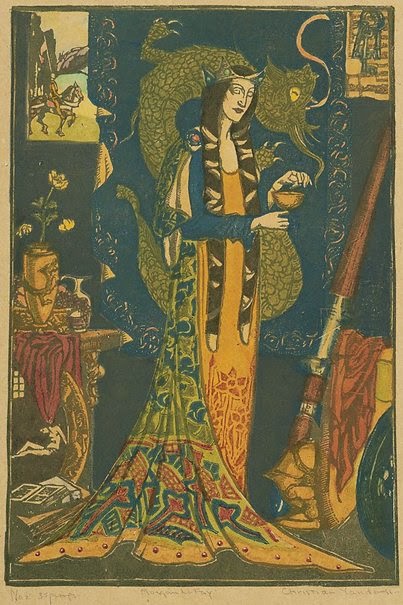 Like Christian's Morgan Le Fay, her life is veiled in conjecture. That they were alike-not so much, but today both remain fixed by the artist in magical worlds unlikely to be disturbed by the hand of humankind.