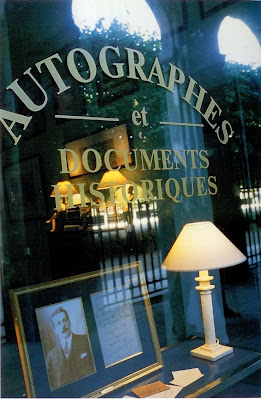 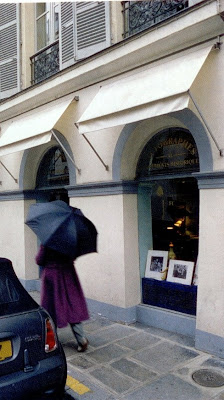 Surrounded by the signatures of Zola, Hugo, Proust, TE Lawrence, and Faulkner-in a previous life- a history teacher-FREDERIC, is now head of the family business-that specializes in autographs since 1830. 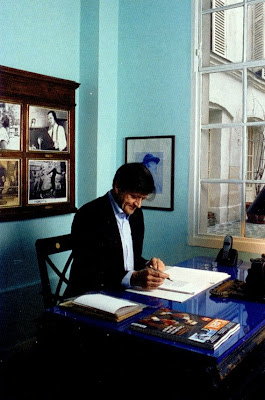 Along with being immersed in all this history, he is surrounded by many of his grandmother's beloved possessions in a sea of "Bleu Castaing."* For these objects to have once belonged to the legendary grande dame of the Rue de Jacob- MADELEINE CASTAING- Must make us all pea green.

"She was free, free, free, totally free, with a fantastic independence of spirit and liberty of thought. Conformity bored her." Frederic Castaing

If you don't worship at design altars - follow any of my blog favorites and you will find some reference and much reverence devoted to Grand Madeleine. High on the list paying homage to Castaing (click the titles) An Aesthete's Lament, & again AAL, The Peak of Chic & Topsy Turvy. Emily Evans Eerdmans - topping the list at 5 posts since Dec 2008-is working on a book about the Grand Madeleine called The World of Madeleine Castaing- much anticipated by those of us waiting in reverence.

the Grand by Soutine, hangs in the Metropolitan Museum of Art 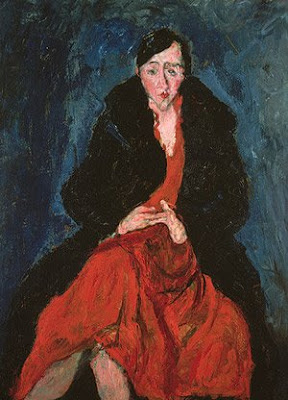 " She developed emotional connections between herself and objects and between the objects themselves. It seems to me that I do something rather similar with autographs. When you find yourself faced with the handwriting of a famous person, it's like a nod or a wink, a signal reaching down to you through the ages... With the ink, the lines, the crossings-out, you discover an intimate aspect of people-you are getting in touch with them in a physical, emotional way. It is like Proust's madeleine." FC

"The sight of the little madeleine had recalled nothing to my mind before I tasted it... "But, "...as soon as I had recognized the taste of the piece of madeleine soaked in her decoction of lime-blossom which my Aunt used to give me... Immediately the old grey house Upon the street, where her room was, rose up like a stage set to attach itself to the little pavilion opening on to the garden which had been built out behind it for my parent."
PROUST


Spending time with GRAND at her country estate LEVES - as a child, FC must have done what most children do- ramble, explore, spin through the rooms and come to rest in his favorite chair. Most of the pieces decorating his shop came from LEVES and the furniture was designed by FC and inspired by the furniture there. 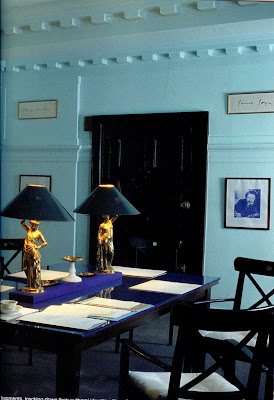 HIS
30 Rue Jacob
(Lamps from Leves) 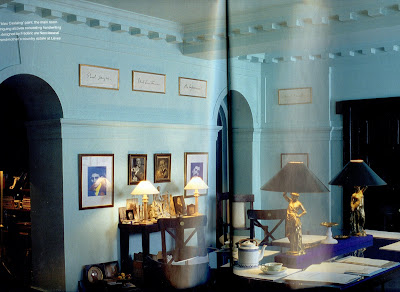 photograph Francois Hammond for the NYTIMES

"Some houses have magnificent meubles, you know, furniture that's very expensive, museum pieces, but she wasn't like that...The furniture at Lèves was nothing by itself. It was simply part of the art of living, something to be happy with, something to sit on and discuss literature." FC

30 Rue Jacob
bathed in BLEU CASTAING-
About "the blue-green color of Mr. Castaing's autograph shop - I was interviewing him and MC's assistant - and they said the current blue of the shop is le bleu Frederic Castaing - MC's blue is more sky blue with less green, and she intentionally wanted it to resemble the sky." Emily Evans Eerdmans 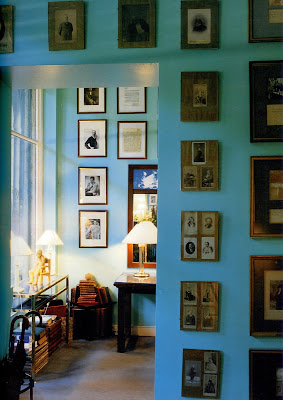 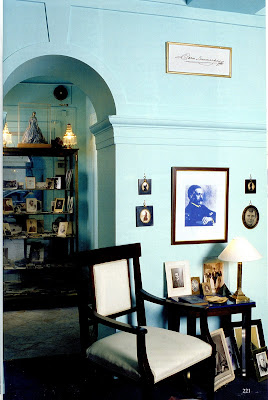 *A note about the blue-green color of Mr. Castaing's autograph shop - I was interviewing him and MC's assistant - and they said the current blue of the shop is le bleu Frederic Castaing - MC's blue is more sky blue with less green, and she intentionally wanted it to resemble the sky. EEE