Ottoline~ ready for her close-up 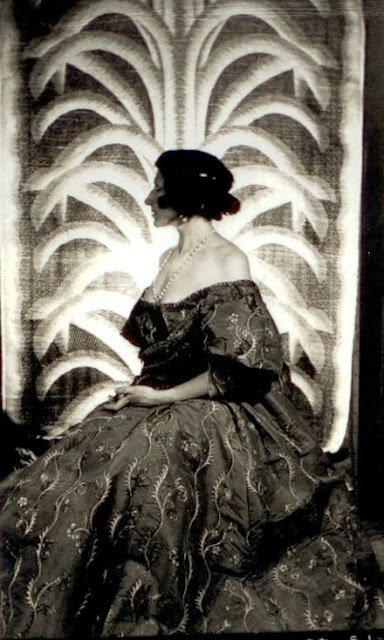 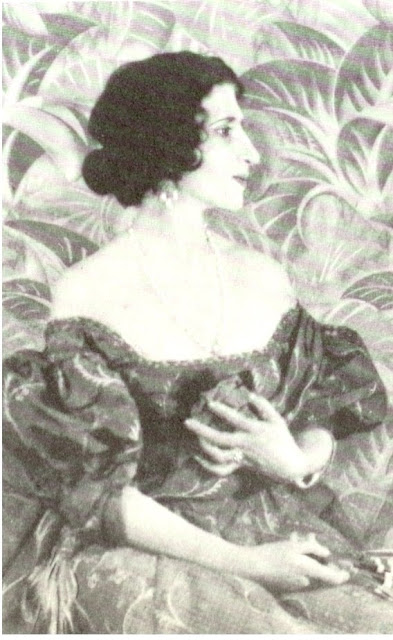 Lady Ottoline Morrell encouraged her friend Virginia Woolf to include the Duchess of Newcastle-Margaret Lucas Cavendish-in Woolf's The Common Reader. Woolf's description of the Duchess: generous to a fault, her desire for knowledge and her longing to be the best of friends, also seems to have described Lady Ottoline Morrell perfectly. More than anything- both the Duchess and Ottoline shared a penchant for unconventional fashion:flamboyant, eccentric, romantic. For Ottoline all these similarities were familial, the 17th writer-poet Margaret Cavendish was  Ottoline's famous ancestor. Margaret Cavendish wrote the words about her "fashions as I did invent myself", but they could easily have been written by Ottoline Morrell.

Ottoline's bearing- striking at six feet ,and her fantastical fashions,were inspiration for countless novels in her day. As Virginia Woolf recorded elegant Ottoline's appearance- it was something akin to a mermaid, "red-gold hair in masses, cheeks as soft as cushions with a lovely deep cromson on the crest of them, and a body ... swelling, but smooth." As the Lady aged, her appearance was said to have taken on a caricature of her younger self, Woolf's nephew Quentin Bell still said of Ottoline ( at age 60) that there was still 'something sexy 'about her which fascinated him. She was 'that fantastic Baroque flamingo.'

'her voice, her laughter, were deep and masculine..Everything about her was manly . She had a large, square, middle-aged ace, with a massive projecting nose and little greenish eyes, the whole surrounded by a lofty and elaborate coiffure of curiously improbably shade of orange ' from Adolous Huxley's Crome Yellow.

Her striking gowns were born in her imagination. She expressed herself in her dress- regardless of the fashions in vogue of the day. The historic costume lines she wore made her stand out and drew people to her. As fashions changed in the 1900's and onward, Ottoline's dress looked even more eccentric. While Lady Ottoline was head designer the creator-seamtress of most of the dresses was her devoted maid Benty. Benty was master of adapting the dresses Ottoline found in paintings as she traveled extensively. In a bit of costuming, Benty would tack hems & skimp on seams. It was the Lady along with precious period fabrics that made the dresses striking. The embellishments of Ottoline and Benty's embroidery added the finer details to their latest creations. 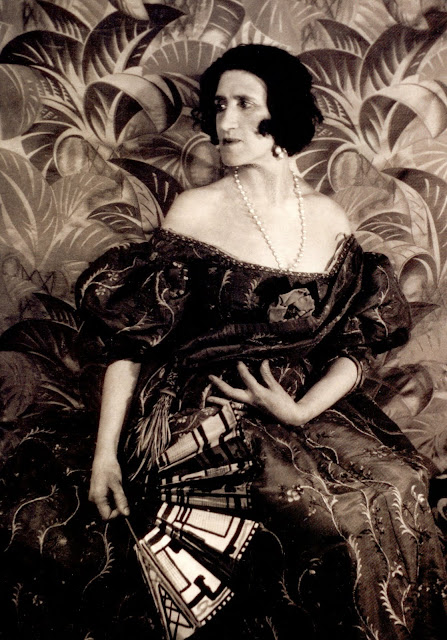 In  1928 Cecil Beaton photographed Ottoline in her signature pearls-once belonging to Marie Antoinette- and a dress
taken from the Goya manner of the 18th century style- in a vivid yellow (a favourite Ottoline colour) embroidered with mauve and silver flowers. Juxtaposing the period frock are a Dufylike textile backdrop and a Cubist fan.

all photographs of Ottoline Morrell by Cecil Beaton

The Lady Ottoline Morrell collection was purchased in March 2000 by the Museum of Costume, Bath, with a grant from the National Art Collections Fund, the Heritage Lottery Fund and the Museums & Galleries Commission / Victoria & Albert Museum Purchase Fund
.

Email ThisBlogThis!Share to TwitterShare to FacebookShare to Pinterest
Labels: embroidery, having a dress up moment, Ottoline Morrell