a fascinating artist, it is no surprise LEONOR FINI found her interiors another fantastical canvas for painting pictures, tales and perches. Today, her work found in many important collections of modern art. Upon her death The London Times obituary spoke of her physical beauty, her erotic art, and her legions of lovers, whose names "read like a roll call of the literary and artistic talents of that brilliant age." A largely self taught Surrealist-though she never officially joined their movement- Fini was befriended and admired by them. Often living with two men- a lover and a friend-or both-she preferred the creative arrangement of a ménage à trois. 'Marriage never appealed to me,' she explained. 'I have never lived with just one person. Since I was 18 I have preferred to be in a sort of community - a big house with my atelier and cats and friends, and with one man who was rather a lover and another who was rather a friend. And it has always worked.'


Many of her paintings hang in the renovated attic space where the muse visited Lenora Fini. The 2000 square foot space in Paris was Laboratory for the artist. A Baroque allegory of Justice carved in wood  stands alongside the Fini canvases. A 17th century Italian table presides over the Fini collection and just below this photograph-FINI perched on the same table with her cats. The artist found cats-her greatest muses-other than self- explored the feline and its relationship to women. 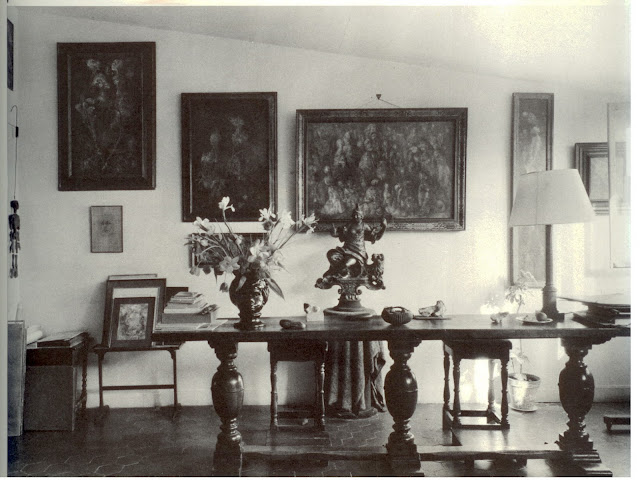 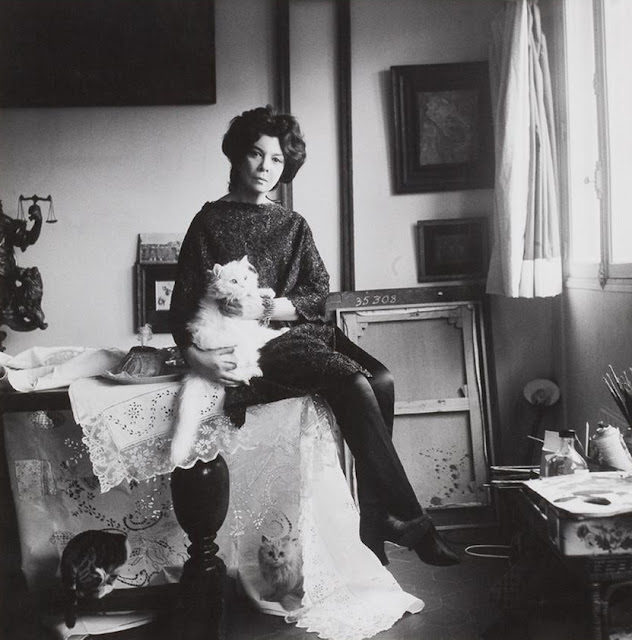 her Muses & her Work 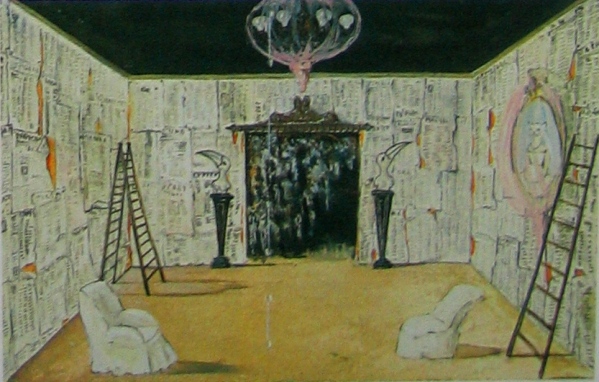 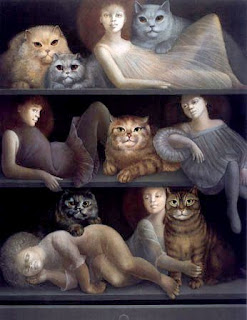 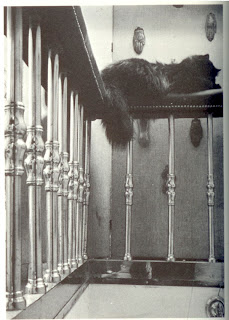 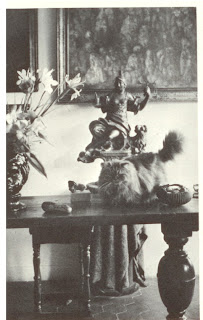 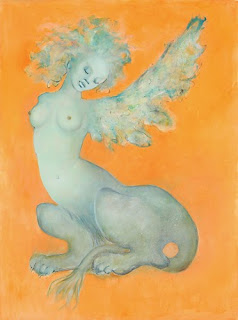 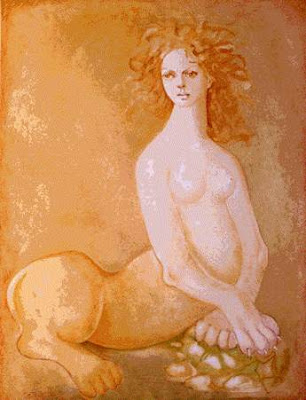 'The wardrobe was flung open: silks and satins, masks and boots, girdles and stage-jewelled coronets were spilled knee-high about the room. We tried on this and that, criticized or admired one another until everyone was dressed within the rules, which were that we be nude only from chest to thigh.'  Julien Levy, Fini's NY art dealer 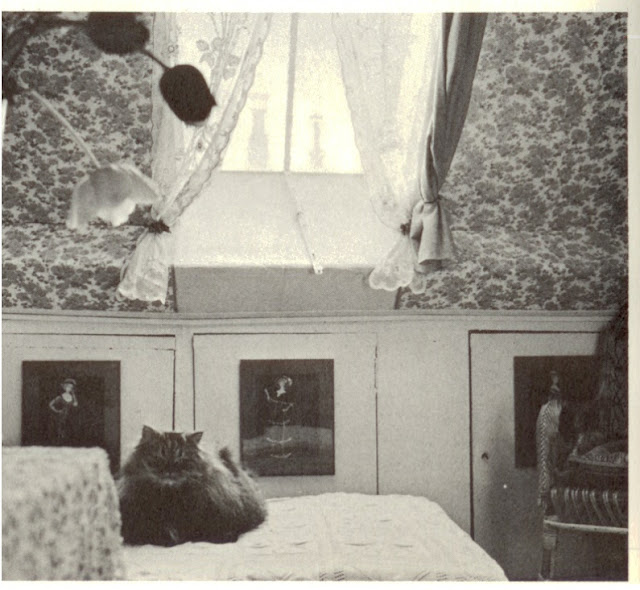 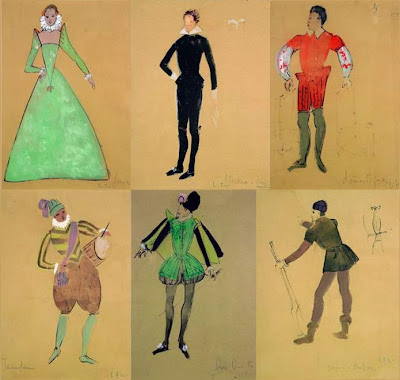 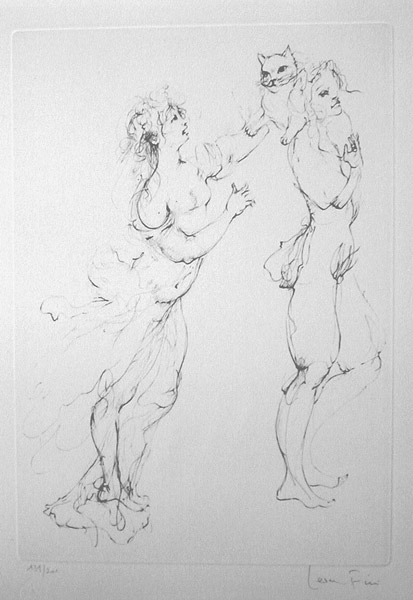 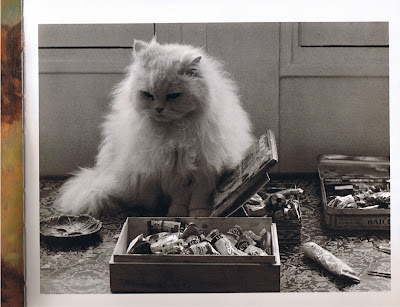 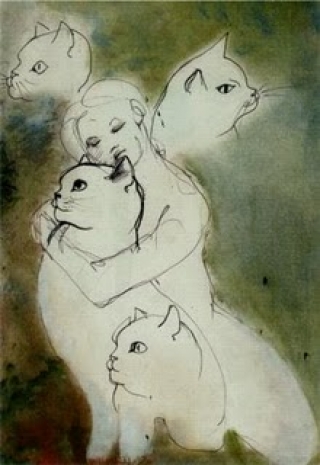 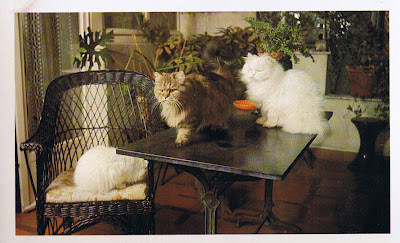 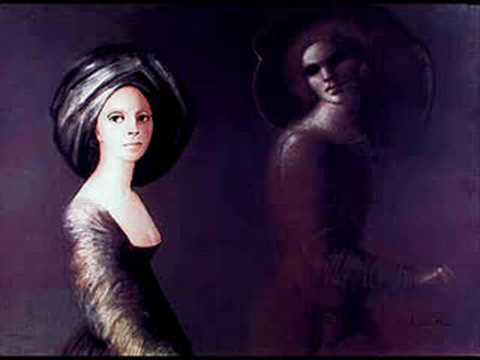 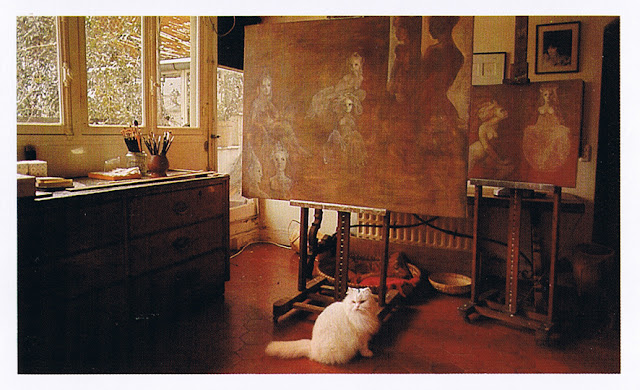 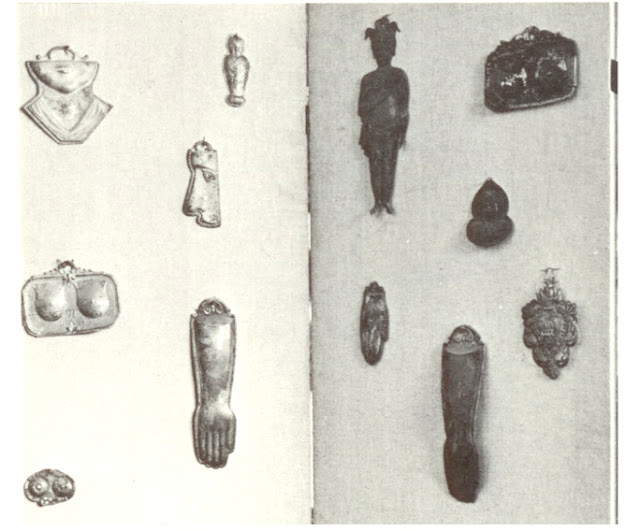 a collection of Neapolitan ex-votos hand on a screen

patterns in Fini's paintings appear on the floors of the apartment


Areas of the studio were covered in an English linoleum with Persian patterns in greens, blues and reds. (see below) & these designs obviously found their way into her paintings. 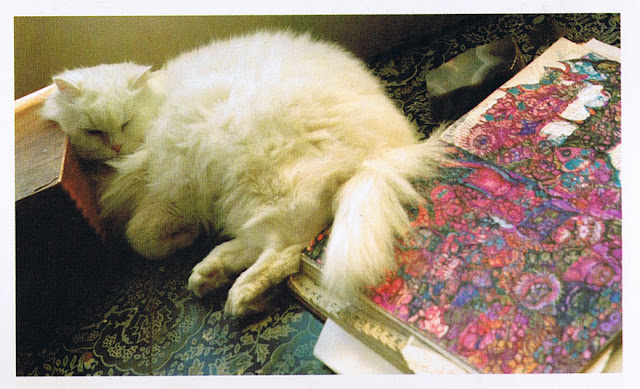 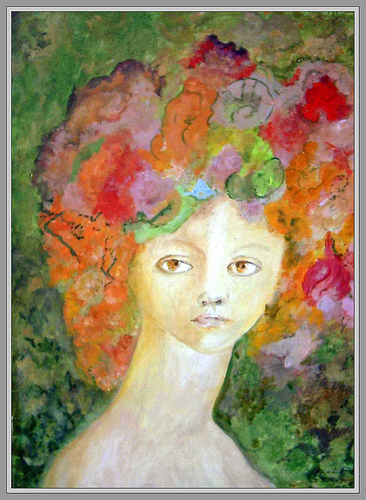 another Fini self portrait

a corner of Fini's studio 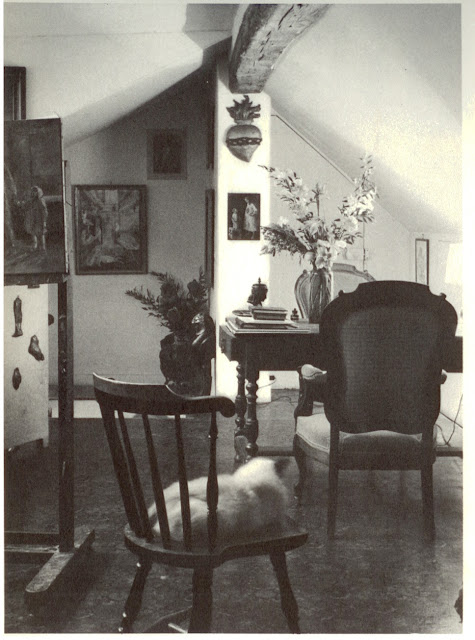 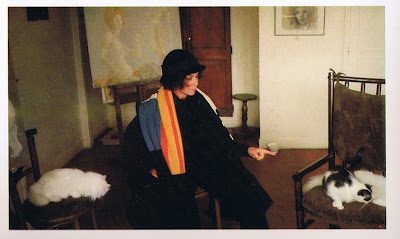 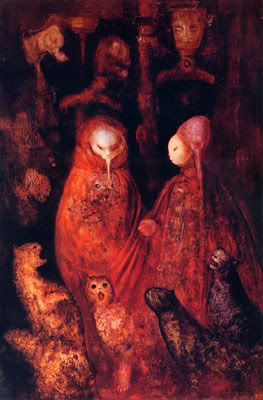 A corner of the studio is eked out at a sitting room with an eclectic mix of chairs and objects. A folding chair of leather and wood (Fini seated in the chair above), a 17th century Dutch chair- (seen in the two photographs below)  and a rocking chair circa 1900. The walls are covered in a mole- coloured velvet-serving as a solemn backdrop for  one of her most sinister paintings. Objects litter the space: an Egyptian head, a Greek Sphinx, pre Columbian jewels, geodes and a collection of ex-votos. 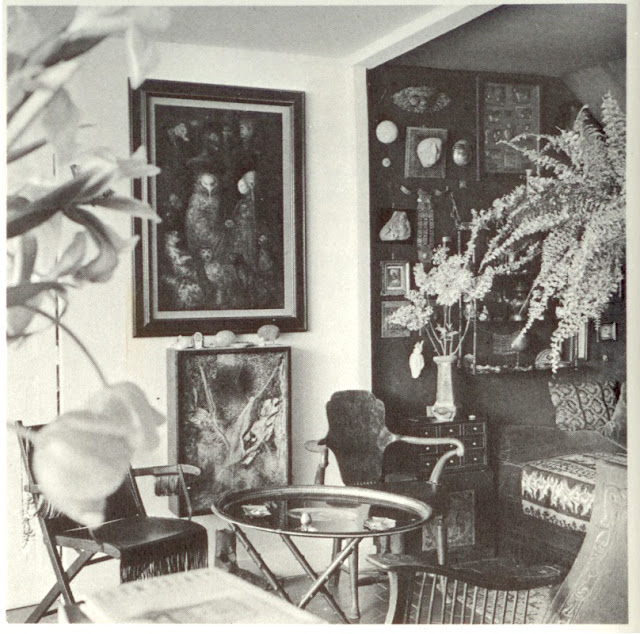 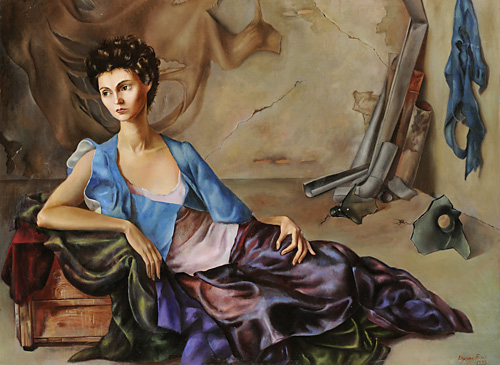 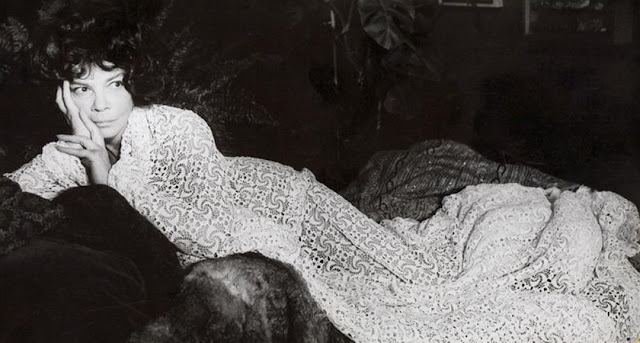 According to Fini's obituary in The Guardian: 'At one gallery opening she wore a beautiful Siberian wolf-fur coat, which she had exchanged for a painting. When someone suggested it was rather warm for such clothing, she opened her coat to reveal that she was naked.' 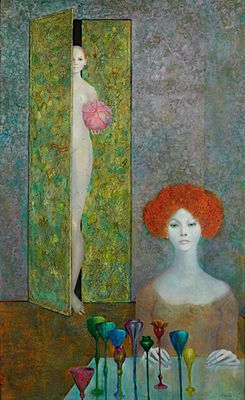 'I have always loved, and lived, my own theatre,' FINI 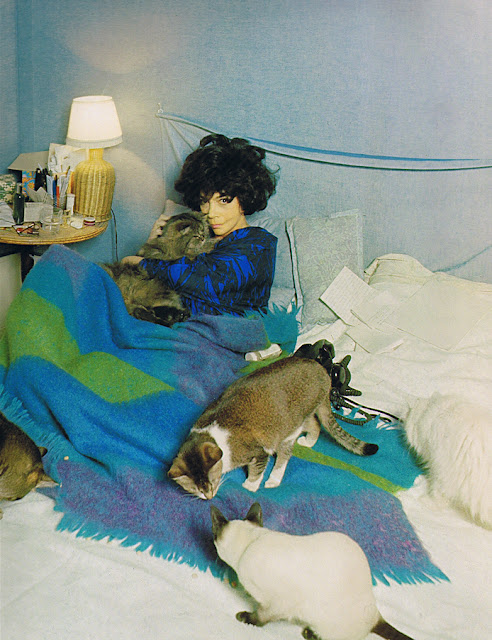 .
links are provided in the reading of this post where quotes are used other resources, images provided from the list below.-
for further reading of FINI I recommend Sphinx: The Life and Art of Leonor Fini- by Peter Webb
the Telegraph here
the Spaightwood Galleries here
& Les Chats here

Email ThisBlogThis!Share to TwitterShare to FacebookShare to Pinterest
Labels: how they decorated, Leonor Fini