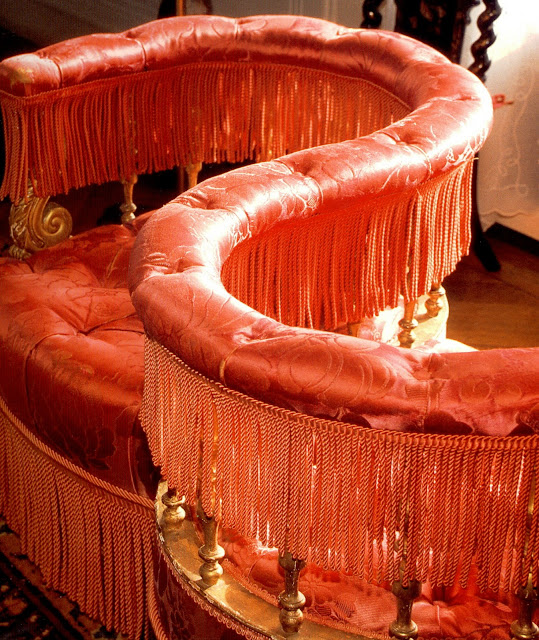 a tete a tete- the creation of Betty de Rothschild

what do W magazine and Betty de Rothschild have in common?
in the April issue of W magazine the photography of Tim Walker brings the great Ingres painting of Betty to beautifully- staggering- proportions. In  BLOW- UP,  Tim Walker takes some of his most beloved  portraits and blows them up- filling the walls of Glemham Hall in  Suffolk . Baroness de Rothschild's 1848 portrait by Jean Auguste Dominique Ingres is featured along with other works- Winterhalter's Empress Eugenie, Tissot's Captain Frederick Burnaby and King George III by Allan Ramsay-it is all a splendid mix-up!  The stylist working with Walker, not for a moment to be excluded, is set and costume designer Rhea Thierstein. Thierstein brings the portraits lavishly  and  languorously to life.

What if these sitters stepped out of the overblown canvases of these portraits?
Some of Walker's do.
Walker felt it and when you see them you will too-"There's something ghostly about it, Something of the past." As you know-this is a recurring--OK-  obsessive interest of mine- this something of the past Walker refers to. The Walker photographs are sure to be pasted on blogs everywhere. I look forward to seeing them, and hope that  time will be taken to actually explore the paintings Walker  blows up.  please-Not just  the usual oggling, googling, and omging . Yes-as I have been admonished- I can be hard on my fellow bloggers- and more than once gotten the rap of the paddle on my palms.
So what? So be it.
Little is it worth- A "Paste & Post mentality."

Now about Betty.
As the Rothschild dynasty rose  in the 19th century- one women came to play a unique role in creating the legacy of the de Rothschilds.  It was Betty de Rothschild that set the standard of what it meant to be a French Israelite within the rising Rothschild dynasty. The only current in-depth biography The Life and Legacy of Baroness Betty de Rothschild by Laura Schor sheds light on the life of the woman in the Ingres painting. Critics of the day said it was Ingres' best-Critics today still agree.  Though  the Rothschilds were friends of portrait painter Ayr Scheffer- he had just painted  their daughter Charlotte- Betty was adamant that Ingres paint her portrait. She  approached the artist in 1841.
He wasn't mad about the idea and had a real disdain for the" portrait" in general.
He would become the most sought after portrait painter of the day.
He would change his mind after meeting the vivacious Betty. 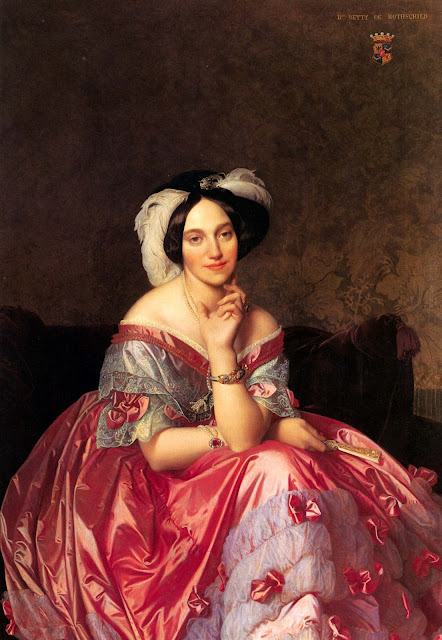 It would be 1848 before the painting was completed. Late into the portrait, the sitter and painter had words about the dress Madame had chosen. A perfect blue for Betty- Ingres without a word -changed the color of the dress.  Ingres said- he painted for himself and not for her- the painting continued.  Though now decidedly pink, there are traces of blue lingering under the net of the bodice and bands of gauze along the skirt.  There was a vivid shade of rose called African pink according to the Lady's Newspaper for January of 1948 that may have caught the artist's eye and pleasing himself -acted accordingly.

Betty's " jewellery" was her own- and not to be altered. Some things were sacred-even the great Ingres dared not touch!  In the portrait she wears a pearl necklace ending in a tassel, a pearl bracelet with a ruby clasp surrounded by brilliants and another bracelet set with gold and precious stones in a complex winding design reminiscent of the serpent motifs of mid nineteenth century jewellery. ( Ingres in Fashion Aileen Ribiero)  Betty was known to love her "jewellery."  Betty wore a toque of black velvet trimmed with ostrich feathers and a Moorish pin that crowned her sleek black tresses. Traces of the exotic beauty idealized in French literature are obvious as is the sensuality of the sitter's pose. The belle Juive  was the ideal beauty of  both writers and artists featuring prominently in the novels of her friends-Theophile Gautier  and Balzac.  It was 1848 after all and rarely- if ever- was the body- albeit a knee- so visible through a lady's gown. 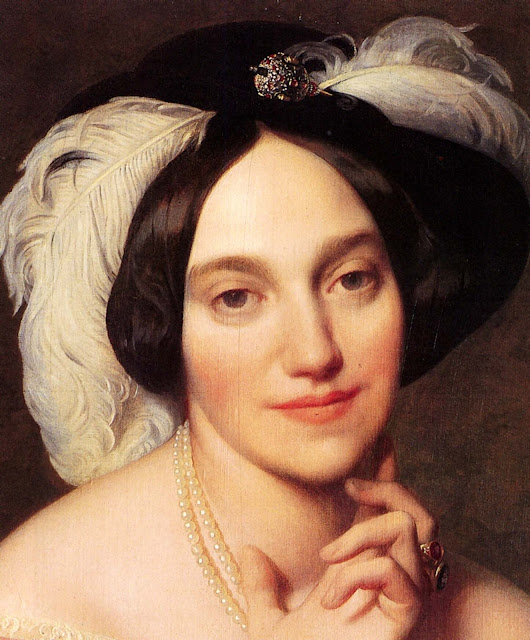 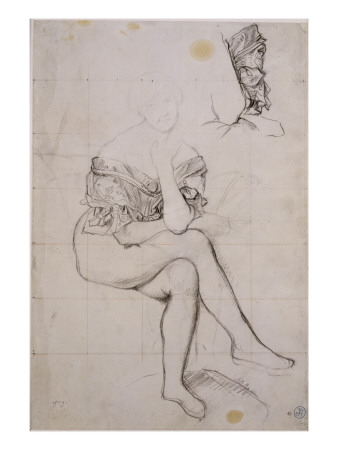 After many starts and stops, the portrait was finally completed in 1848.
Both were pleased. Betty had been painted before-but this was her favorite and she would always say so.


the Ingres studies of  Betty de Rothschild
Ingres was known to produce many studies, working through the details of the dress and the body's relationships. 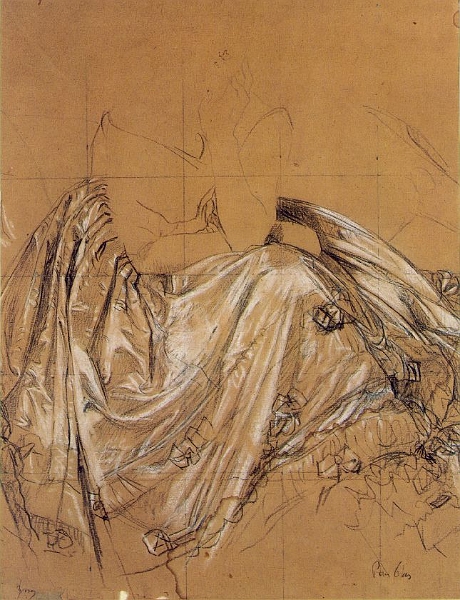 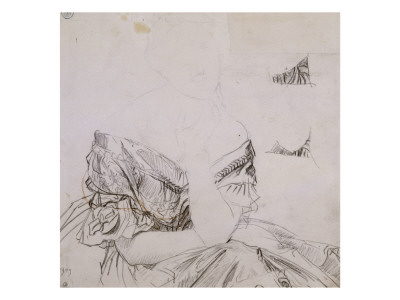 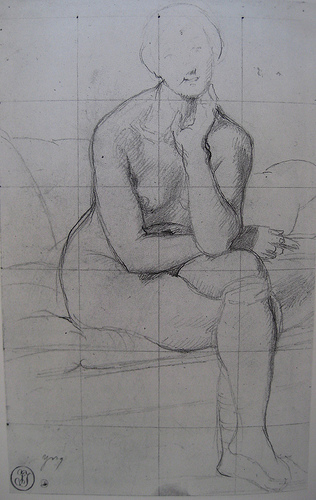 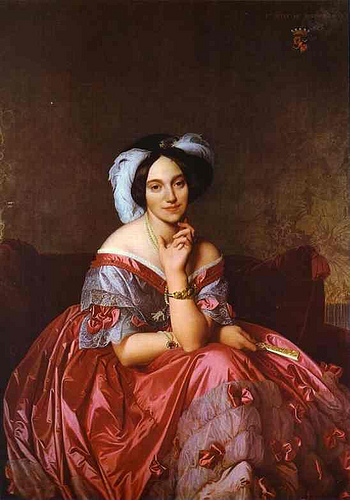 Ingres' portrait of Betty was exhibited in his studio in the summer of 1848. The portrait would be admired and discussed in the glittering salons of Paris-one of course was Betty's own.  Friend and critic Theophile Gautier described the portrait:

Mme de R... dresses in a gown of lively and brilliant pink, has just seated herself amid splendid pleats and rich fabrics that still billow; one of her elbows rests on her knee; the right hand casually plays with a closed fan; the left hand, half folded, barely touches her chin. The eye sparkles, lit by a retort ready to burst from her lips.  It is a spirited conversation, begun in a ballroom or at supper that is still going on; one can almost hear what the interlocutor is saying just outside the frame.

The headress comprises a beret of black velvet that graciously accompanies a white feather. This Athenian of the rue Mazarine had the coquetry to place his grand style at the service of the fashion press, and this beret, which the milliner Mme Baudrand could sign, is despite its exactitude, [rendered] in the most beautiful Greek style.

... never before has M. Ingres made anything so bold, more lifelike, or more modern; to extract beauty from one's own milieu is one of the most difficult tasks of art.


A privileged life, born into the de Rothschild family, Betty was the niece of James de Rothschild and at age 19 became is wife.  James was thirteen years older than the young Betty. She had grown up in Frankfurt insulated by the enclave of Rothschilds, yet she-like all Jews-was captive within the strict censures imposed on the Jews in the city.  After moving to Vienna at sixteen, she experienced much the same ostracism. The persistent belief was- Jews were strange- odd-foreign and it was best to limit their  freedom and social life in the city.

Betty had fallen in love with her uncle James and was well prepared for the life James could provide; she spoke French fluently and studied music and drawing. She brought to the marriage a  1.5 million franc dowry- far beyond that of many royals- while gifts  for the bride poured in: diamond necklaces and bracelets, ostrich feathers, ermine furs,  and rich embroidered materials of gold and silver. 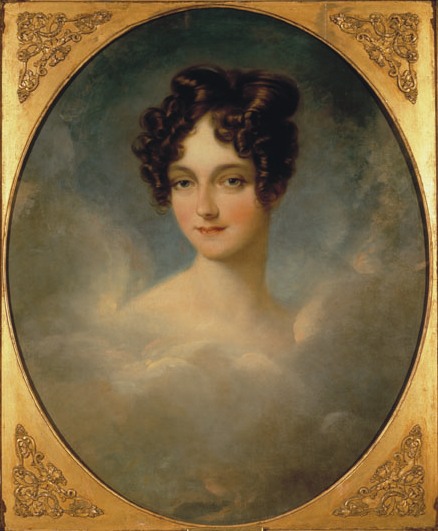 
We dined at a sumptuous feast at Rothschilds. He has married his niece... just out of her nursery, she does the honors of her house as if she had never done anything else. ~Lady Granville, to her sister, Lady Georgiana Morpeth London, December 12, 1824.


Betty was indeed a socialite to rival any other of her day. She would be known for her famous salon and  as a patroness of  the arts. She would also prove to be an invaluable influence in the family's quest for prestige and a tireless philanthropist to the Jewish community. There was no charity refused by Betty. The names of  Queen Marie-Amelie, Balzac, Rossini, George Sand, Chopin, the Moitessiers & Heinrich Heine rang through the halls of  the Baronne's  Paris house in the rue Laffitte.


Louisa de Rothschild, Betty's cousin would write: Betty... was always as usual fascinating, eloquent- tant soit peu exageree et grand dame. I found the afternoon's visit long enough and was not sorry to regain the comparative quite of the steam carriage, for Betty's torrent of words and thoughts rather stunned me and made me feel even more stupid than usual...

Now- about Betty- the decorator.
How many houses does one need?
For Baron James de Rothschild there was never a question- as many as one desires.
The family had established an opulent salon in Paris and had created a stir with their renovations and reconstruction of their rue Laffitte mansion. Betty's parents Caroline and Salomon-Jame's brother- were neighbors and both houses had begun major work to modernize and expand their residences in the 1830's. The culmination of the work was an 1836 crush on the rue Laffitte with guests and the press invited to view the results. Betty's great friend and poet Heinrich Heine wrote: Here everything comes together which the spirit of the sixteenth century could invent and the money of the nineteenth century could pay for; here the genius of the visual arts competes with the genius of Rothschild... One must admire the flair with which everything had been done,as much as the costliness.


In 1868 the Baron purchased Chateau Lafite destined to become famous its grapes and its grapes. Sadly the Baron would not live to see Betty complete her work at the chateau -he died at the end of that same year. 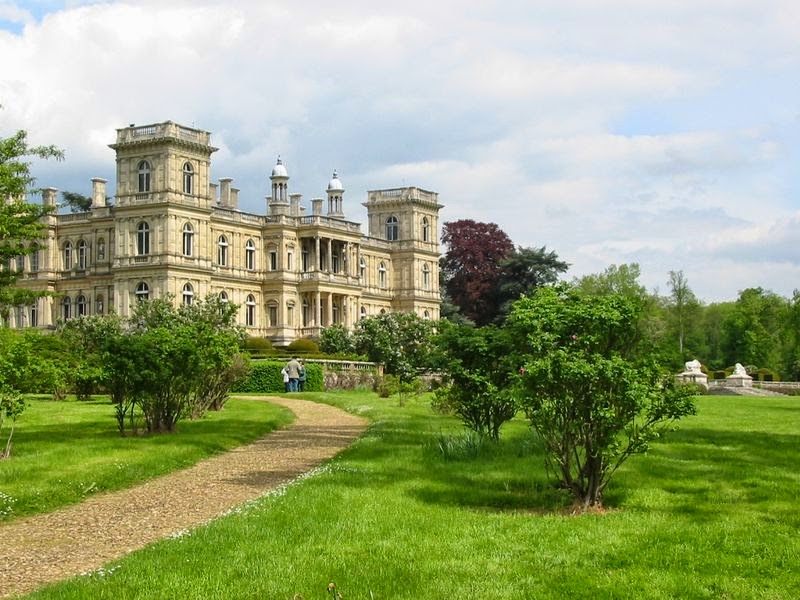 Less than ten years after the completion of  his Château de Ferrières-  James was determined to have Lafite. His wife Betty- beauty and  muse- was given carte blanche to do up the chateau and she wasted no time doing it.  The rooms of the chateau were quite intimate in comparison to those of Ferrières. Betty quickly assembled her upholsterers on the property, purchased hundreds of metres of damasks  from Lyon and began creating  furniture to her specifications.  Special passementerie was applied, braids and tassels here and there, full over stuffed couches, poufs and tufts began  appearing in shades of scarlet and emerald in the main rooms of  Chateau Lafite. 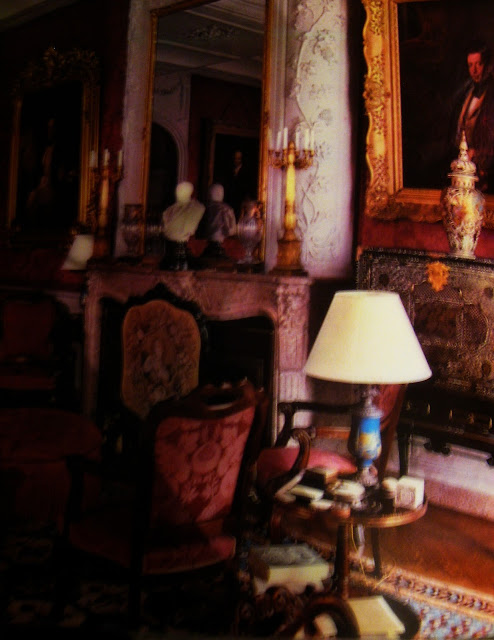 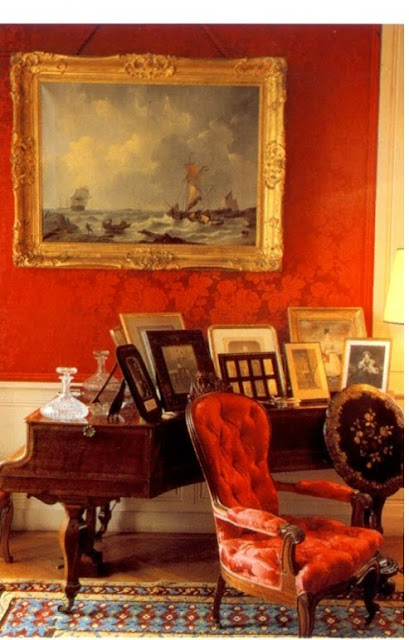 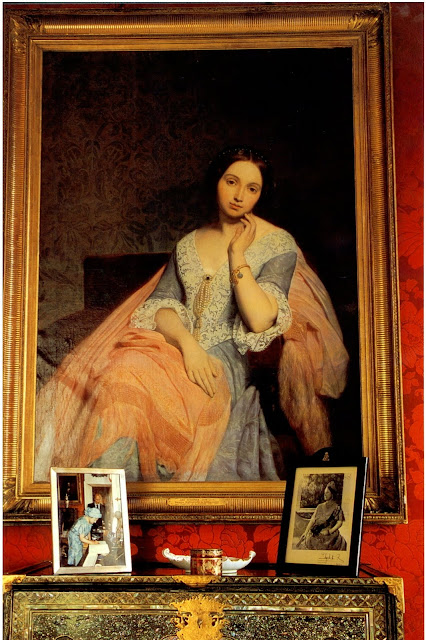 Salon Vert
The Green Salon or Library is filled with the tufted chairs,  silk damasks, velvets and ebony bookcases inlaid with ivory. Betty gathered what pieces she wanted from Chateau de Ferrieres and arranged them intimately throughout Lafite. 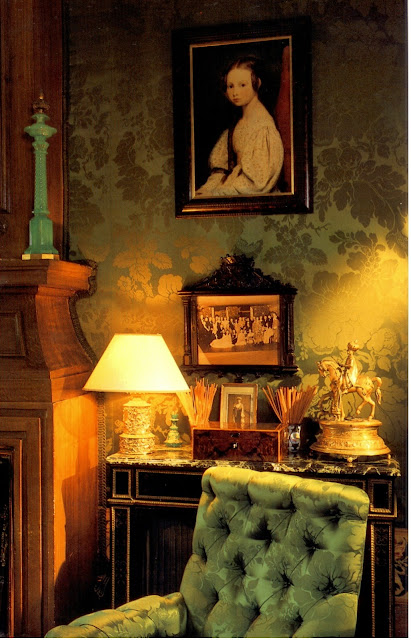 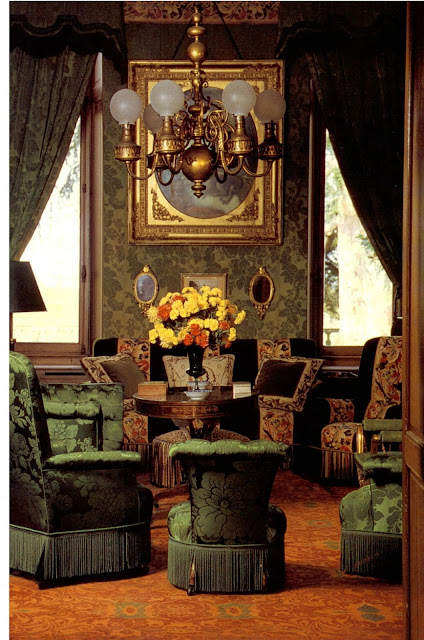 Betty's signature opulence remains at Lafite. The flourishes, the finery, the Rothschild style. Betty de Rothschild died in 1886 leaving  staggering wealth and a great legacy to her children- in her will she asked that they remain close and true to their faith. 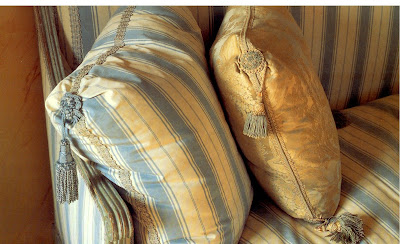 The Halls of Lafite 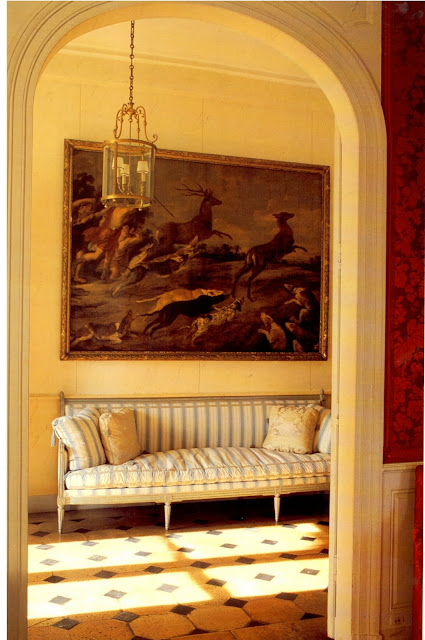 The ravages of  World War II would leave its mark on Lafite and the family. Occupied by the German army & ransacked -Baronne Elie found upon returning, running water and electricity had been installed and valuable books and furniture had been concealed. Priceless objects had been walled up  in the Chateau's famous private cellar. Thanks to the intrepid Liliane and her desire to bring back Lafite's beauty-she set about restoring the chateau. She pinned scraps of the original silk damasks on the walls and returned to Lyon with samples to commission the same brocades, damasks and braided borders. Cellars were opened and family  paintings were lovingly arranged according to her eye in the restored rooms. Chairs and sofas were returned to the Red Salon making it much as it was in Betty's day.

Gautier's  words are unlikely remembered today- they so clearly describe the Ingres portrait. It is the portrait  that is gazed upon, talked about and admired much as the lady of the portrait was in her day. 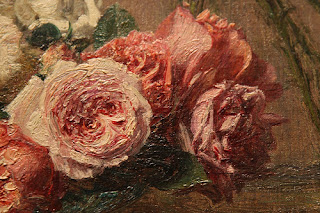