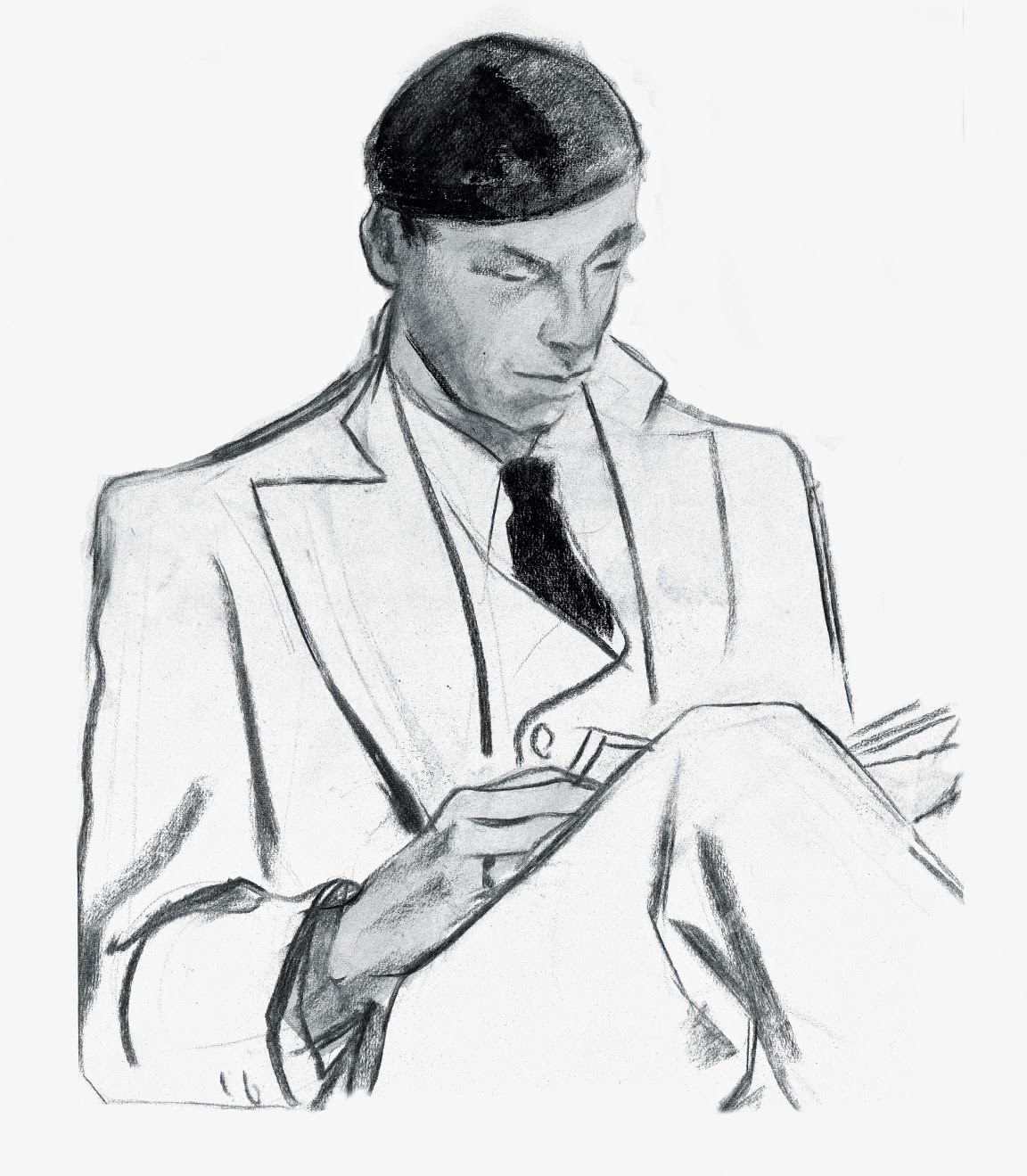 drawing of George Stacey, from his personal papers

(overheard)
Stacey: My dear Ms. Footer, We've got to stop meeting like this!
Ms Footer: But Stacey, I want to know everything about you.

Stacey: No! No- I declare it is not. You must know how discreet I am about my clients and the work I do for them, glorious though it may be... And I am shy Ms. Footer, very shy! 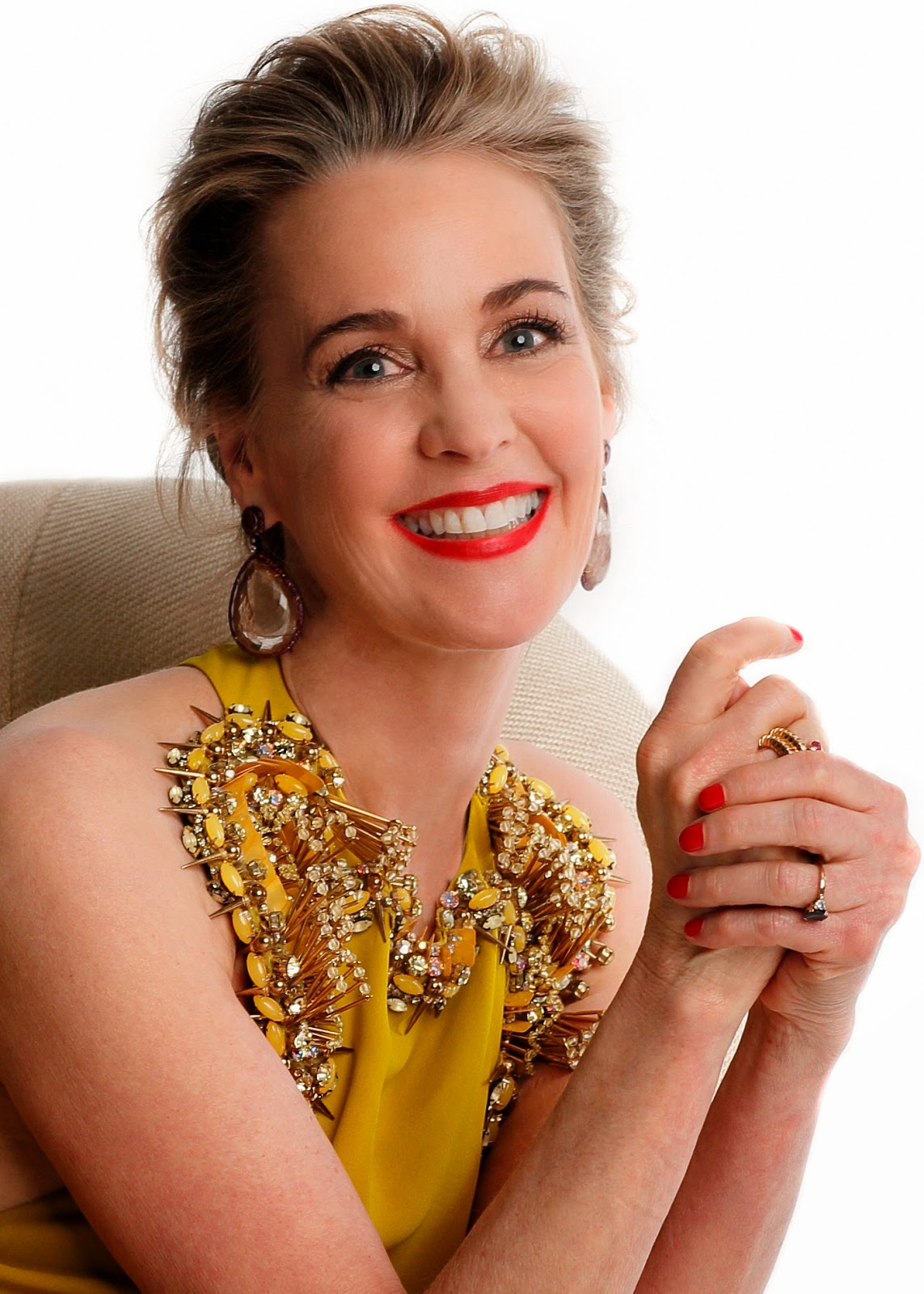 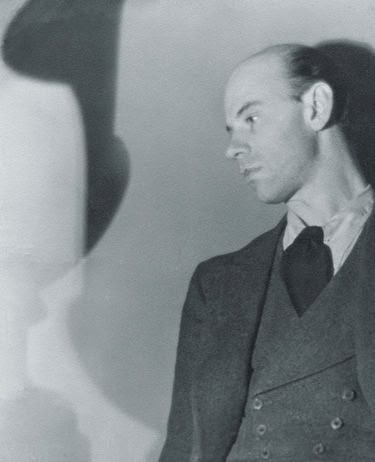 Ms. Footer: Of course...But, but Stacey, it's Vogue, it's W, it's Gotham, it's The Wall Street Journal, it's AD, Everyone is talking about Us.

Stacey: Yes, Yes, my dear, and next it will be Page Six, the gods forbid, and US. Isn't that a magazine? and just what is AD?
Ms. Footer: Architectural Digest, Stacey, and if that does happen, I assure you it will be the most tasteful thing US has ever published.You deserve all the praise, it's long overdue you know...

Stacey: My dear Ms. Footer, that is so-but you know me better than anyone, I am painfully shy. Much much better tete a tete with a client or you, of course. I must say though I did enjoy that party you had- was it at Grenouille? And the photographs of another fete seen at Reggie Darling. Lovely! My my that Mario does not age one bit! And that fellow Blue- don't you know- said some very kind things about Us-recently.
Ms. Footer: Leave all that to me, George-if I may call you George.
Stacey: Yes, Ms. Footer, of course you can, but only if I may call you Maureen.

and so,They parted.
She went on tour telling the world about new her book devoted to the decorator Dean Billy Baldwin would call the "king of decorators," George Stacey. Along with Stacey's story, Ms Footer's book adroitly traces the social and cultural history of the world as Stacey saw it happening. With this as the book's backdrop, Stacey comes in to view with clarity, and with great charm. As Mr. Buatta says in the book's introduction, mimicking Diana Vreeland, Stacey had Pizzazz. Vreeland-always at the forefront-an early Stacey client considered pizzazz as "the note of daring," 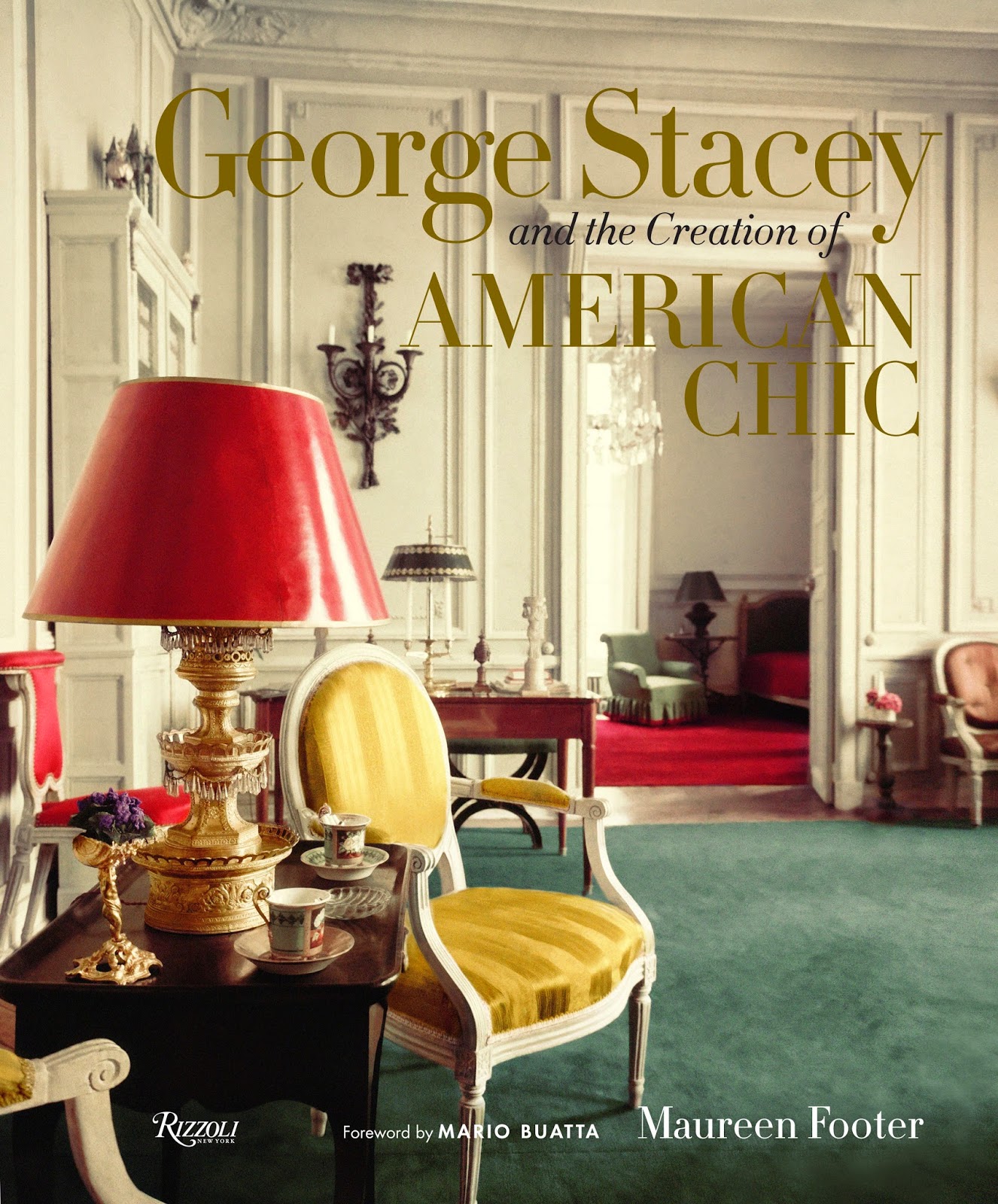 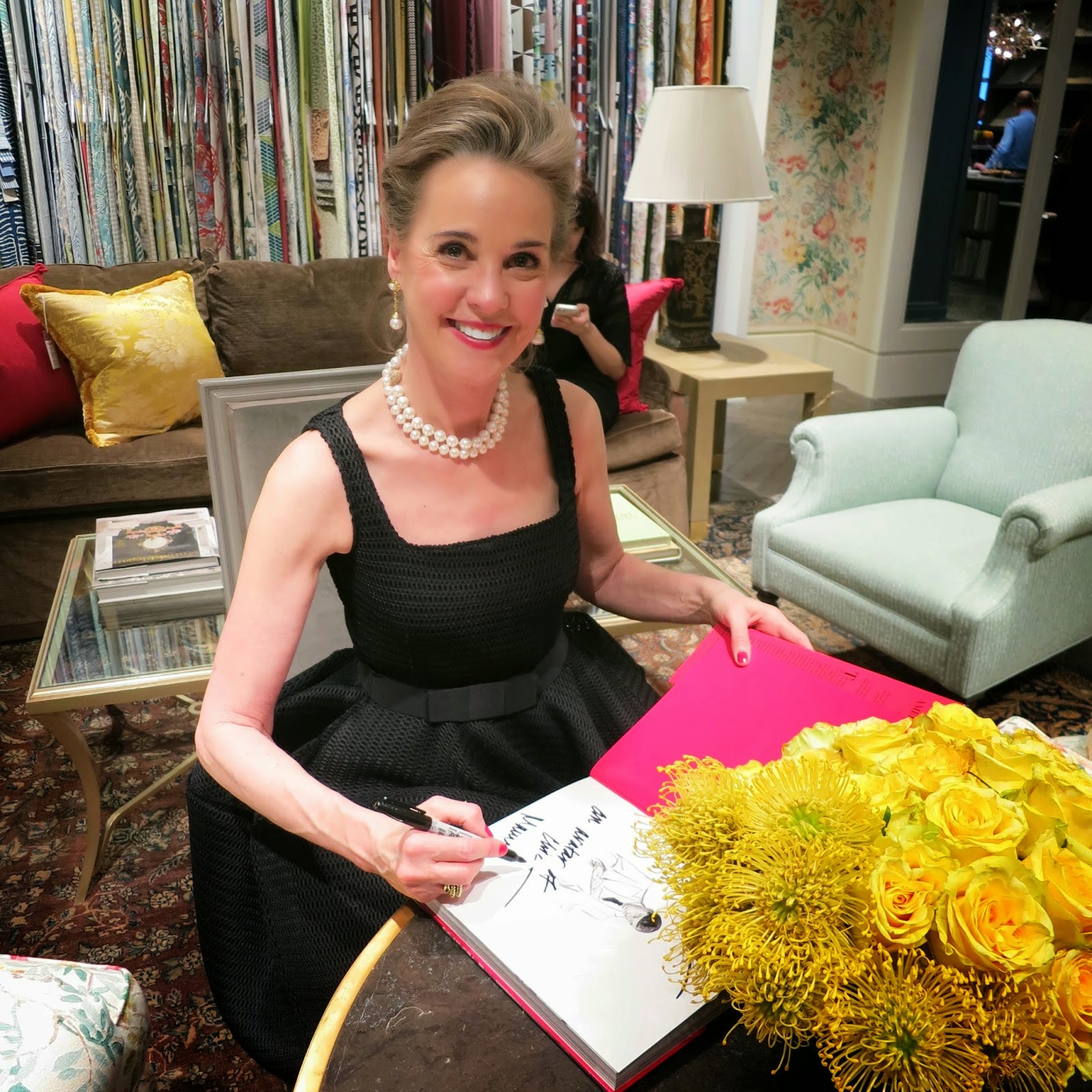 Maureen at her book signing in Brunshwig and Fils showroom, D & D Building-
attend and photographed by an admirer and blogger Reggie Darling here.

Chateau de Neuville, Stacey's  Louis XIII chateau in the 1950's and 60's
Here, he practiced the nonchalance he preferred- while exhibiting his Parsons School of Design training,
with an "emphasis on classical design" and the "eclectic and dynamic." (Footer) 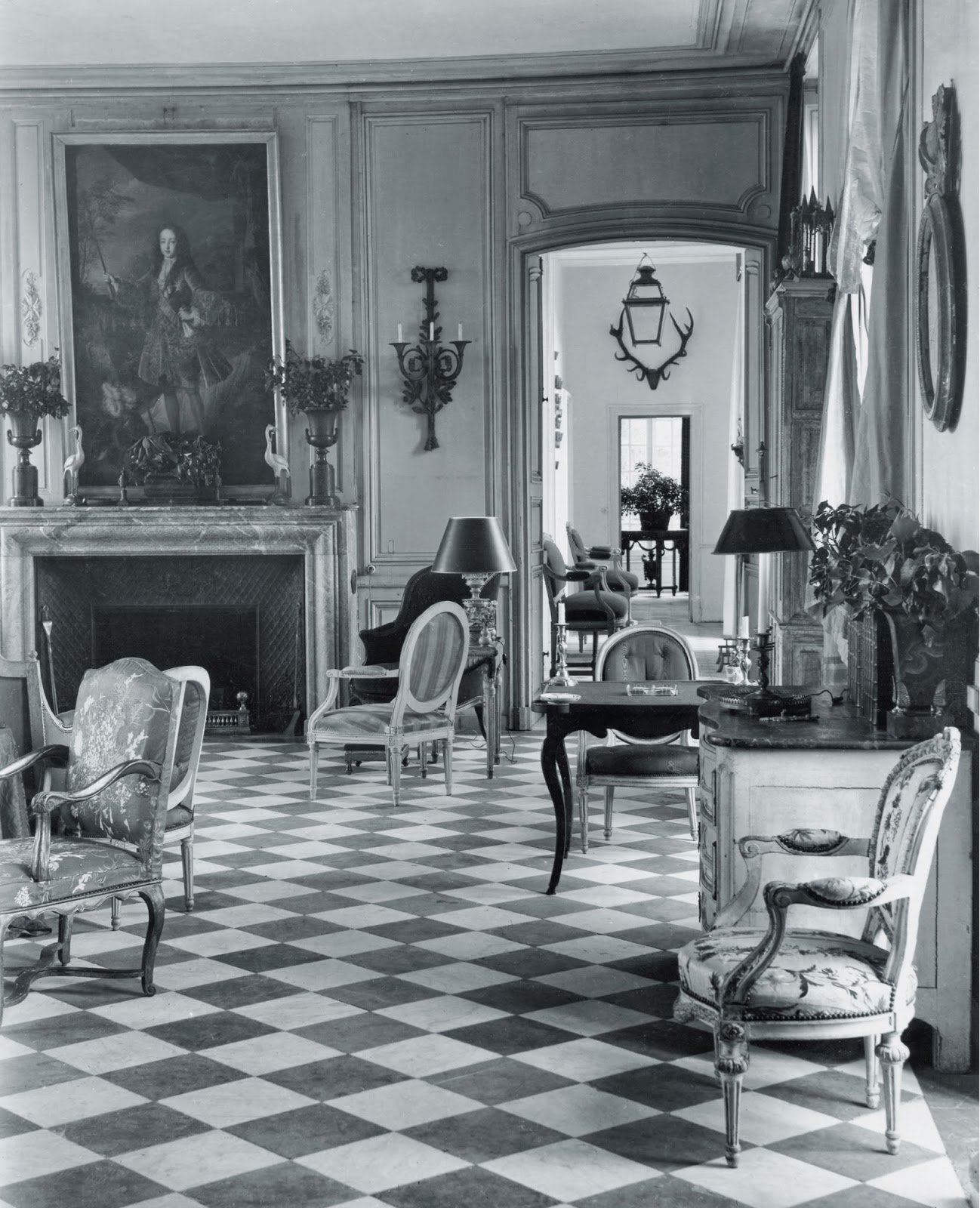 
Mark Hampton's watercolor of Stacey's living room at Le Poulailler in France
Stacey's chateau furniture is set off by the rough hewn beams and plaster,
and brick floors in what was once a chicken coop. 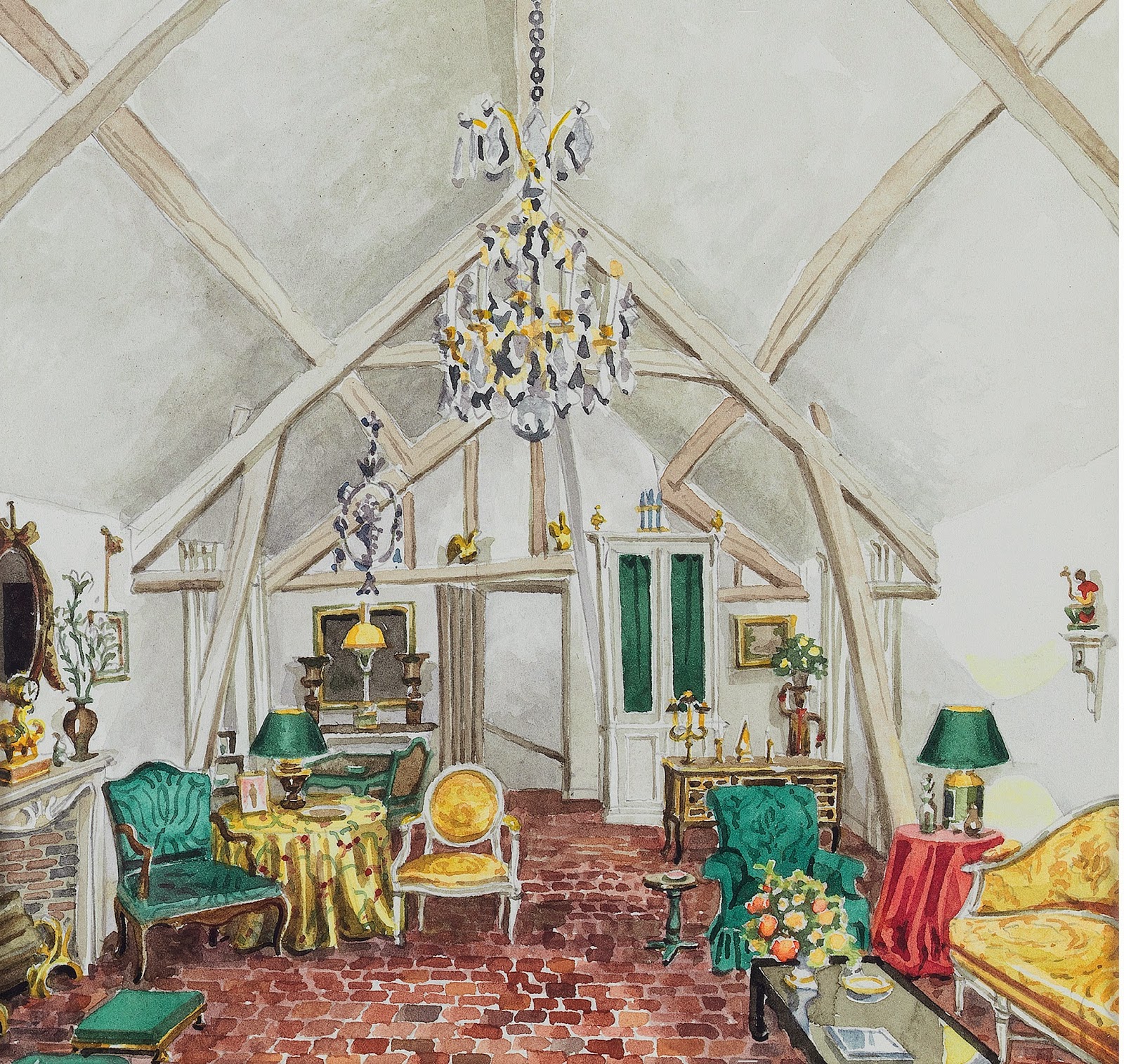 
Stacey's 1930's design, at Peacock Point for Frances and Ward Cheney
Here, Stacey, "went over the top and always stayed in the mood of the moment.
His work was all very glamorous, just the way it should be." -Albert Hadley 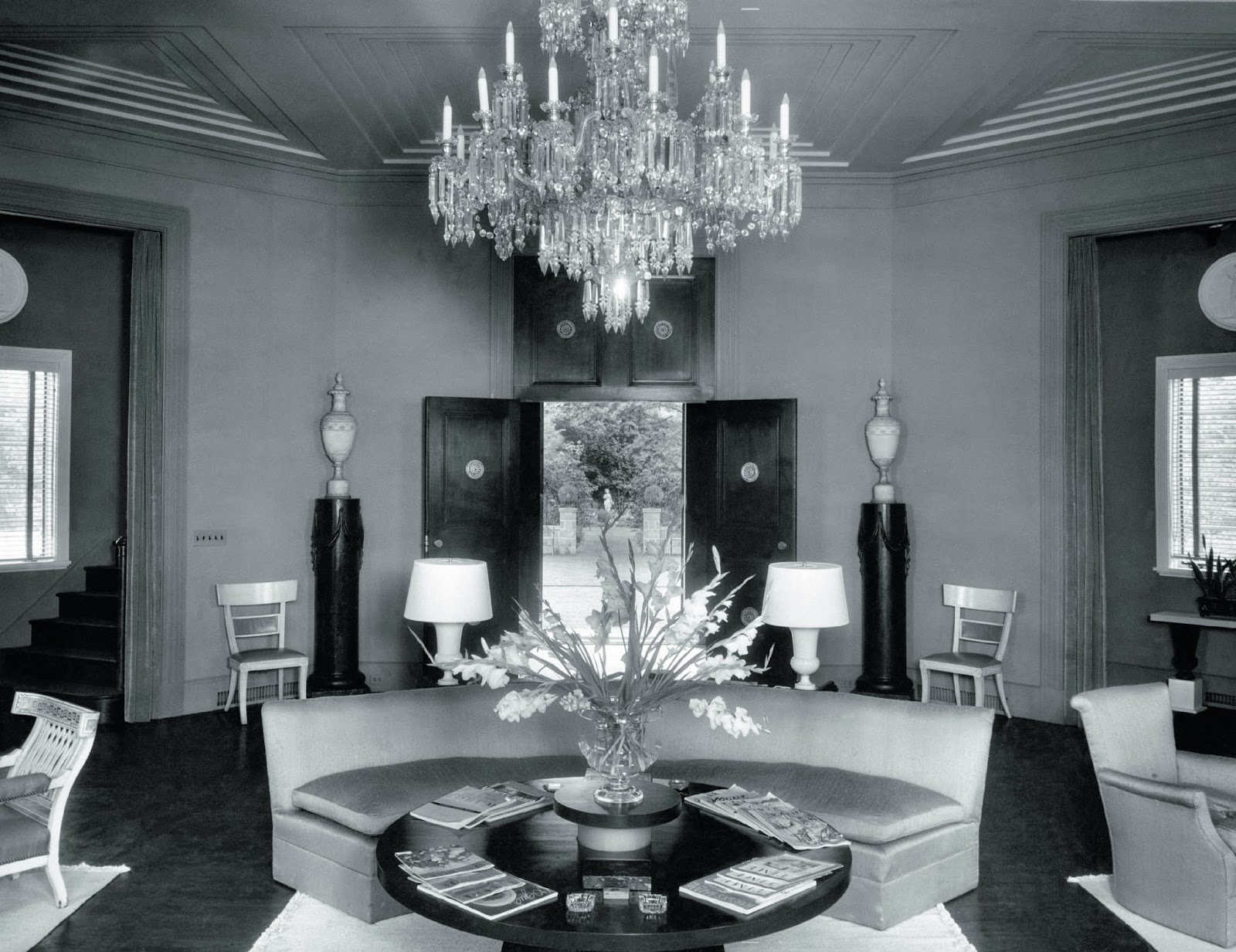 Along with these seminal Stacey rooms, there are many photographs by Louise Dahl-Wolfe from the pages of Vogue, with models posed in Stacey rooms-rooms pursued by editor Diana Vreeland before the paint was dry. Diana Vreeland knew a good thing when she saw it-that's why she called on Stacey to work magic in her homes years before Billy Baldwin's masterpiece for Vreeland's "Garden in Hell." The book opens the homes we've wondered about and describes the Stacey process in glorious and jaunty prose. The book is beautifully laid out -with lavish photographs, and it's not just that- it is a book to read. 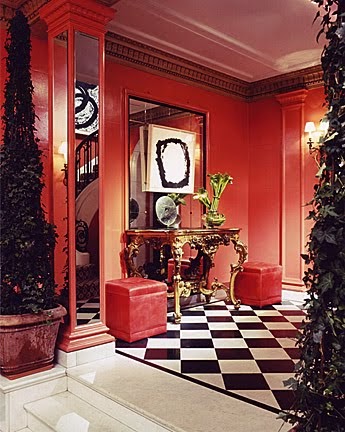 
It's obvious from reading George Stacey and the Creation of American Chic, that Stacey was indeed King-yes-he had his great storied successors-but his rooms- as Footer puts it were always pitch perfect-and the same can be said of her book. It should be on every serious design student's shelf, designers-and the would be as well. George Stacey can no longer linger in the shadows-thanks to her- today King George is at the forefront as the creator of American Chic.