this  story -from the archives:

I am sadly behind on everything this task, the other task & of course the big task of work- along with having been under the weather for about three weeks- I thought this post might be to your pleasure if you have not read it. 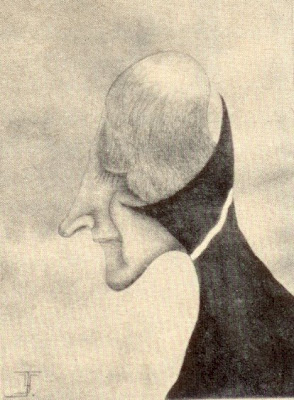 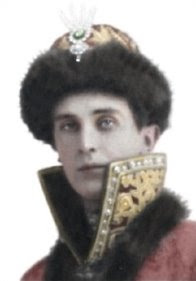 YOUSOUPOFF in Boyar costume for a Court Ball-described as one of the most beautiful men in Europe
Prince Felix YOUSOUPOFF best known, or perhaps infamously known for killing Rasputin in 1916, at the age of 28. Y. along with other Russian nobles, was convinced Rasputin was responsible for the failing House of Romanov. According to Y., he could sing and play the guitar like a gypsy and that is what lured Rasputin to his "house" as he refers to the Y. Palace. After cyanide poisoning, three shots and his eventual death by drowning- Rasputin was dead. YOUSOUPOFF would forever live out his life as the man who gave Rasputin his last rites saying: "Gregory Efimovitch, you would do well to look at this crucifix and say a prayer." 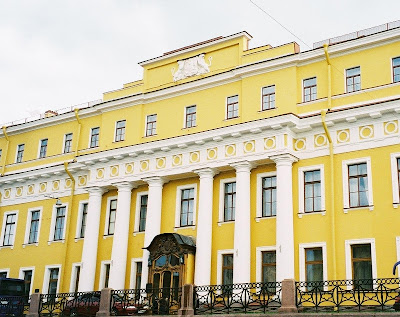 Scene of the crime~
Yusupov Palace-Y. and his wife Irina were the last of the Yusupov's to live in the Palace

YOUSOUPOFF had admittedly led a flamboyant life described in his autobiography- spending time with Gypsy bands and cross dressing. Y. said "he was then as rich as the Czar." After the murder of Rasputin, YOUSOUPOFF was held under house arrest and when the Czar abdicated, Y. returned to the Palace to retrieve jewelery and two paintings by Rembrandt- proceeds from the sale sustained his family in exile. 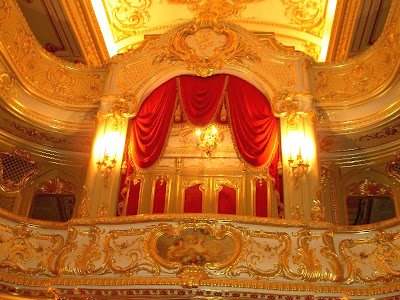 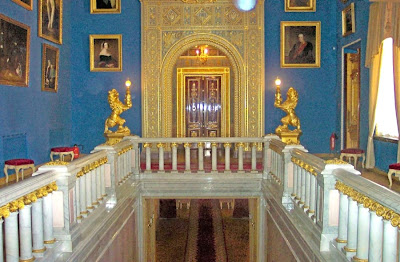 In 1965 the then Editor-in Chief of French Vogue, Edmonde Charles-Roux, conducted an interview with the Prince in his small Paris house, once a stable, where now, "living is turned into art." A flower filled courtyard, with a Beware of the Dog warning is deceiving and the author reveals the dog to be a pug. No reputation as a saint, Y. and his wife Irina always lived happily together for almost 50 years. 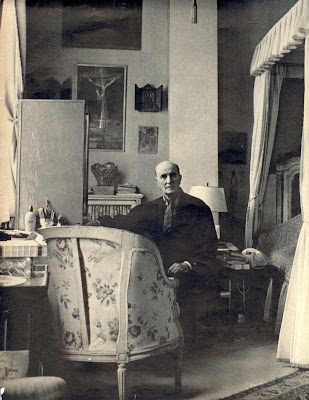 YOUSOUPOFF at the time of the article's writing 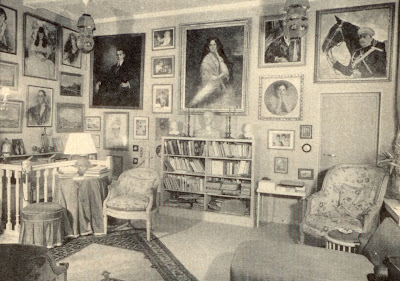 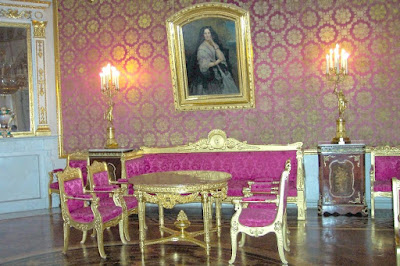 Salon in the Yosopov -
note the portrait that hangs in both the 1965 Y. room and in the current Y. Palace


The author of the article is thoroughly charmed by the Prince. During their sitting, Y. had a way of carrying his guest off to a cottage, a dacha, a desert tent- a gallop through family history. He even speaks about his well known reputation of healing powers. " No one has ever seen me sad. In the worst periods of exile, I've always been light hearted and confident. I have Faith. I always have had." In contradiction to this statement are the YOUSOUPOFF art works.

What is most fascinating is the art revealed in the magazine's pages, Grotesques ,YOUSOUPOFF painted in 1929 on the island of Corsica. This would have been 13 years after the murder of Rasputin. One can not help but find them haunting, alarming, and in light of the events behind the eyes of the artist- gripping.


Quoting from the article:

YOUSOUPOFF: " I was taken at that time with an irresistible desire to draw. Until then it was my wife, Irina, who drew with much talent and imagination figures out of a dream: faces with immense eyes that seemed to belong to an unknown world. It is unquestionable that I began my drawings under the influence of my wife's work. I gave myself up to painting as if under a spell. But what I created were visions from a nigthmare rather than creatures from a dream. I, who love only beauty in all its forms, could create only monsters. One might have said that a maleficent power, hidden in me, tried to express itself and guided my hand."

"My work was accomplished, in a way, outside of myself. I never knew what I was going to do. What I did always turned out to be grotesques or deformed creatures related to those who haunted the imaginations of certain artists in the Middle Ages. One day I stopped drawing as suddenly as I had started. The last drawing might have been a portrait of Satan." 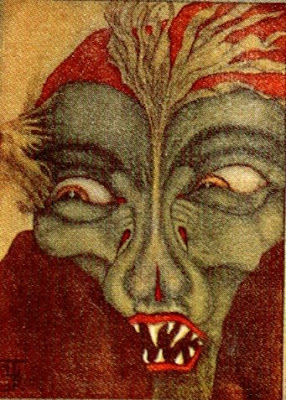 (obviously the painting referred to as Satan by YOUSOUPOFF) 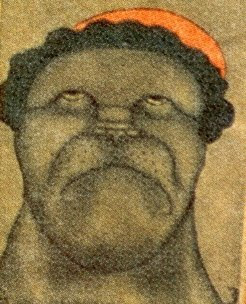 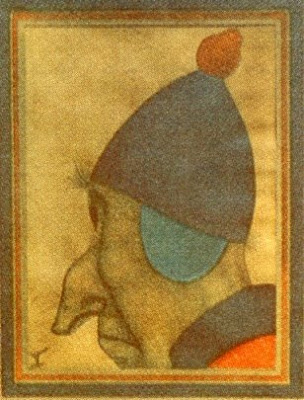 "Since that short period I have not only lost the taste for drawing but the desire. To save my life I could not do it again." (Y.) 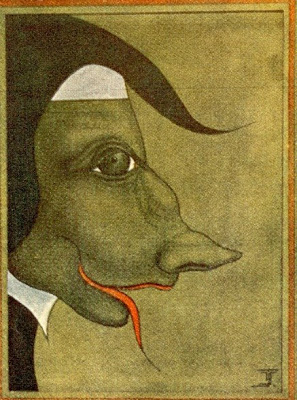 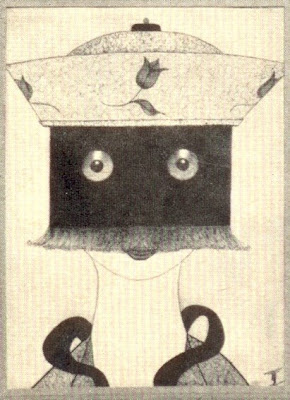 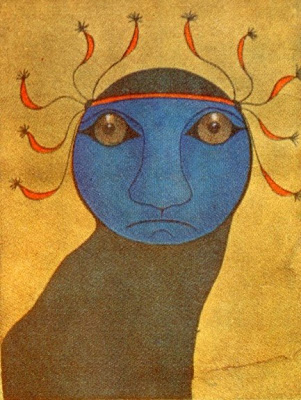 The color in the YOUSOUPOFF paintings is true to Russia. Look at the rooms of the restored Y. Palace, even the colorful Russian dacha. The images also hold- decidedly-the look of the Russian Icon, both in it's formal composition and use of color. COLOR in the Icon is used for its emotional and symbolic content-rather than an accurate representation of color. Kandinsky- the ultimate intellectual abstract artist and a Russian, wrote Concerning the Spiritual in Art(1912) and drew its concepts from the Icon and the Russian provinces. BLUE for both Kandinsky and the Icon painter were the most spiritual, perhaps for YOUSOUPOFF as well. The works- YOUSOUPOFF offered no explanation of- other than those presented in the 1965 article. Many come to mind- maybe too uncertain, too complex or too painful for him to speak about. Whatever, the artist and the observer are left with the images- mesmerizing, haunting and powerful.

YOUSOUPOFF: " All the professionals to whom I have shown these bizarre works have been astonished at the technique which, they said, could normally have been attained only after years of study. Before this period of frenetic production I had never held a pencil or a brush in my hand." 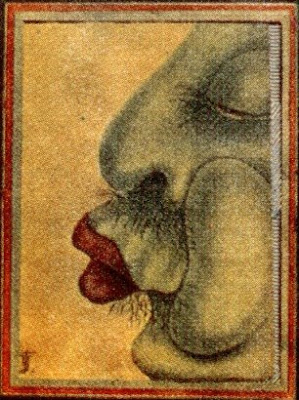 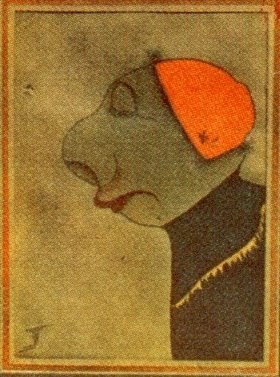 "I, who love only beauty in all its forms, could create only monsters" (Y.)