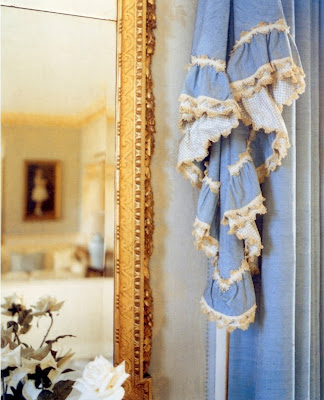 When John Fowler was called by the 2nd Lady Rotherwick and her Lord, the Prince of Decorators was winding down a brilliant career. The year was 1967, Fowler retired 4 years later- leaving-according to biographer Martin Wood- his best, most stellar, work. Wood says John Fowler was at his peak, the interiors 'are more flamboyant, perhaps a touch more theatrical and certainly more sumptuous.' Who am I to argue? 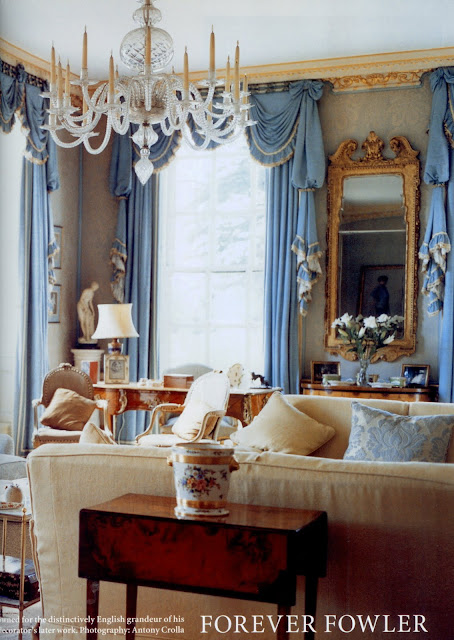 the Drawing Room
done in a scheme of blue, the walls are covered with a damask-a greyed blue (though appearing golden in the photograph below)-shown in the detailed photograph above. the curtains are dominating presence in the room are worthy of a Dior ball gown. one touch Fowler added to the room was a cream geometric carpet that is still a part of the room. 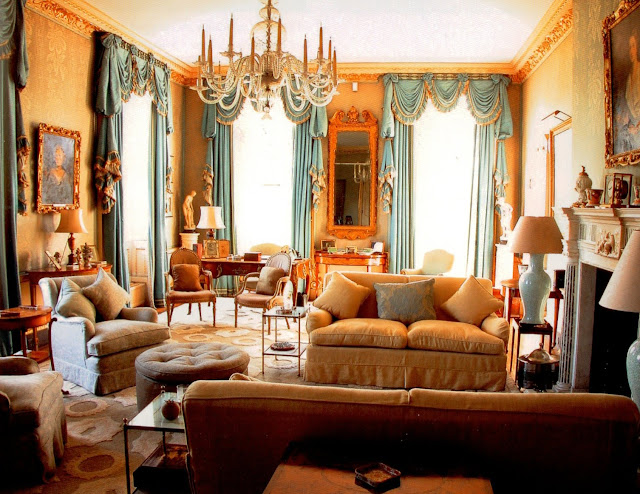 the Drawing Room still has all of Fowler's grandeur intact. Details I love are the small tables about the room, the large lamps, family photographs and the mirror placed in between the two windows, a tight fit -but perfectly placed. 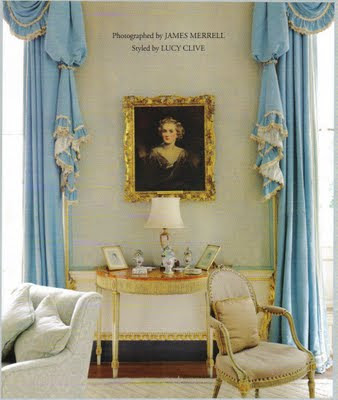 John Fowler had decorated the previous home of the new Cornbury owners, Bletchington Park, and the Lady was quite happy there- but apparently the shooting at Cornbury Park was a draw for Lord Rotherwick. Along with architect Philip Jebb, Fowler set about making some drastic alterations to the downstairs main hall in order to add some upstairs bedrooms. The double height halls were done away with for this purpose,creating a more intimate Main Hall. 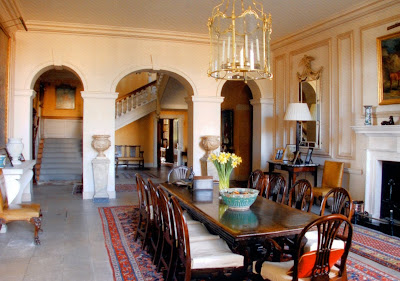 the 3rd Lord Rotherwick with his son at Cornbury Park
(image from Tatler, oct 2009) 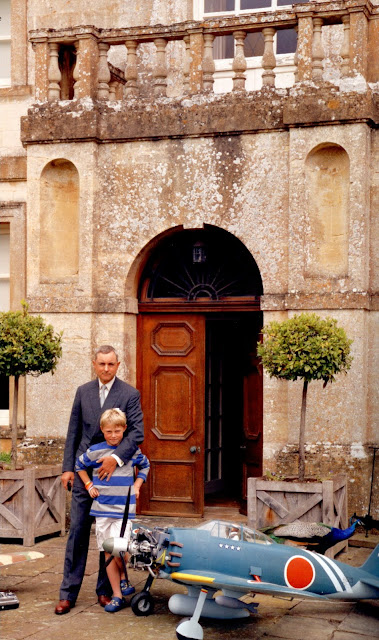 The current residents are the 3rd Lord Rotherwick and his lively , lovely family. Lady Rotherwick, Tania, breathed life back into Fowler interiors- and having a family of teens and toddlers helps. She says 'It's so amazing you literally can't change anything. The most I've been able to do is put a bunch of flowers in a vase and decorate my own study.'  More about what the Lady really does at the end of this post. The Tatler is filled with photographs of the residents and the interiors that Fowler designed for the present owner's parents. Richard Dennen's article Cornbury Takes Off  is a fantastic peak into the 17 room mansion.


family photos in the Tatler 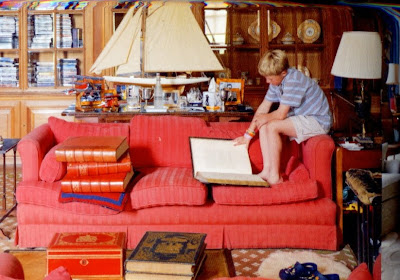 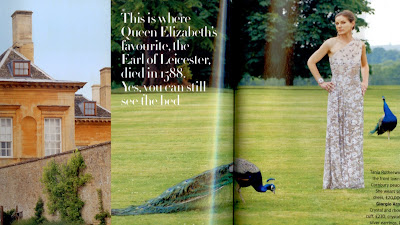 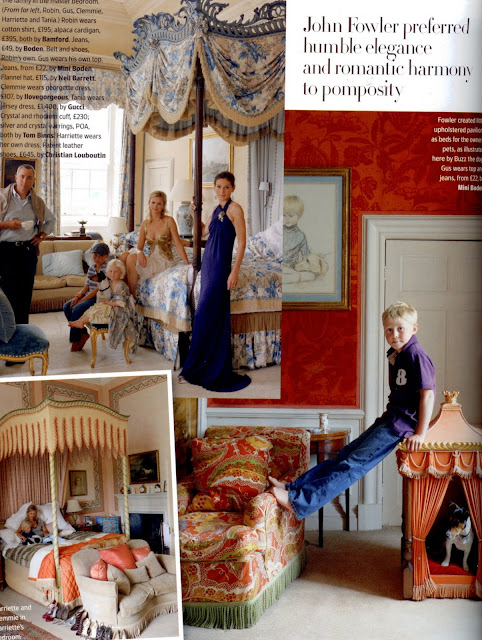 The rooms of Cornbury's debut in print was nearly forty years after Fowler completed the project. Published in the 2008 December World of Interiors magazine, Cornbury appears pristine. As if the designer had worked with the current Lady of the manor, the rooms have a luxurious elegance, a freshness, a traditional stately quality. Stephen Calloway saw the rooms in 2008-and with photographer Anthony Crolla-recorded these magnificent rooms for the magazine. I doubt these rooms could be created today by any designer working. (Oh but of course-Nicholas Haslam!) The attention to quality and the details Fowler laboured over do not exist in the pages of today's magazine rooms. As Stephen Calloway explains- unlike the designers of today, Fowler maintained complete discretion where his clients were concerned and respected the privacy they demanded. This discretion left Cornbury's rooms undocumented. Most designer's today insist on their rights to photograph their work.

Cornbury is full of Fowler surprises. The beds at Cornbury are truly ships of state, trimmed, decked, fringed and beautifully swathed. Stephen Calloway calls Fowler's treatment of the bedrooms to be his 'Mannerist sensibility in full play, creating startling effects through the use of combinations of colour and texture.' The colours are HOT ORANGE, LIME GREEN, VIOLET-GREY- and today we see them coming on strong or peaking in current interiors.

In the MASTER BEDROOM the walls are hung in an off white corduroy velvet. Again- Martin Wood, 'The bed, probably a made-up piece with Georgian posts and a very flamboyant Rococo cornice,was dressed with a Warner's fabric, which was also used for the window curtains.' Here, it is obvious Fowler did not mind putting together elements to get the desired effects. The bed is indeed Beautiful. There are also several intricately dressed dog kennels done up by Fowler for the bedrooms, one seen in the Master (below) and another in the Bletchington Room. 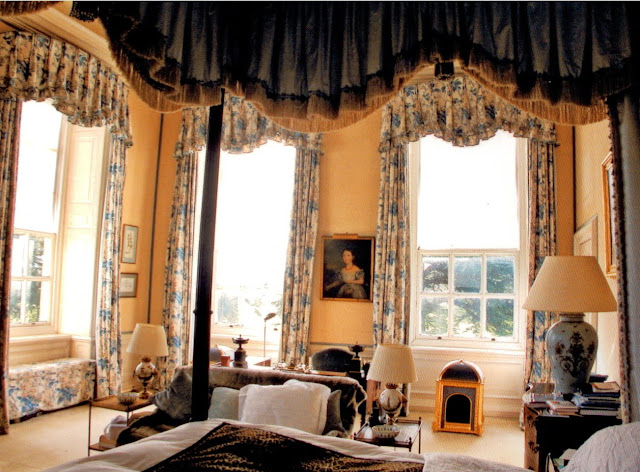 the Bletchington Bedroom ,circa Fowler
a Chinese red Pomegranate damask on the walls 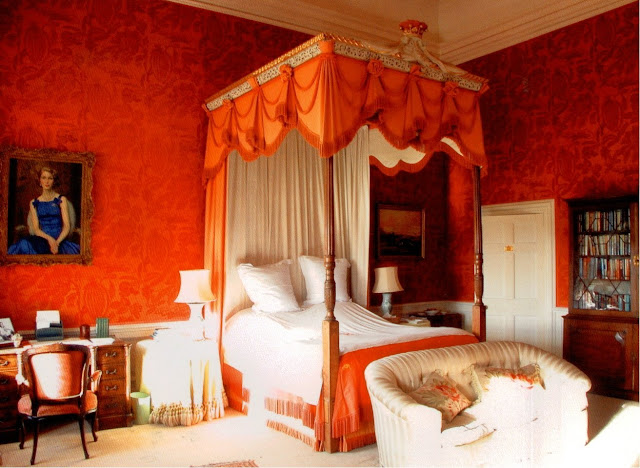 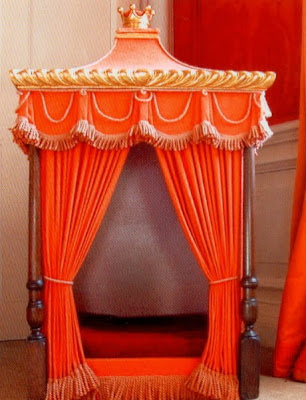 the current resident of the Bletchington Kennel 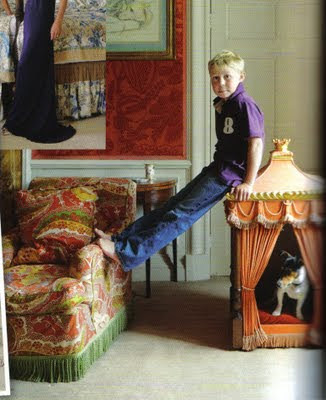 the Buchan Bedroom
Mauny papers and  a riotous pendant canopy 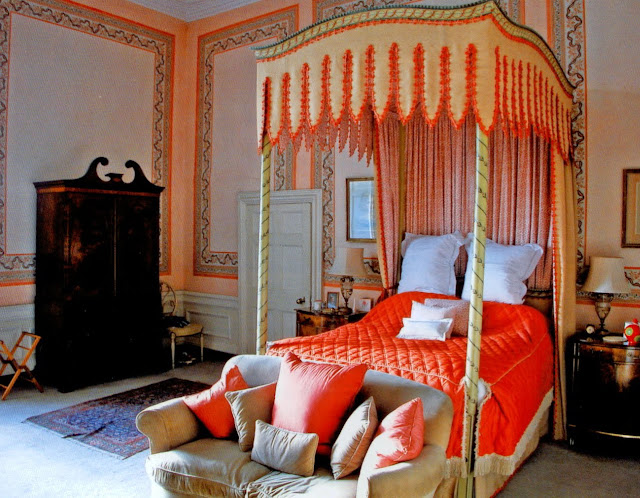 a stately bath off the Garthmore Bedroom (not pictured)
Fowler used one of his favoured Mauny papers PRIMAVERES
& a Friar's chair in apricot, note the decorated door 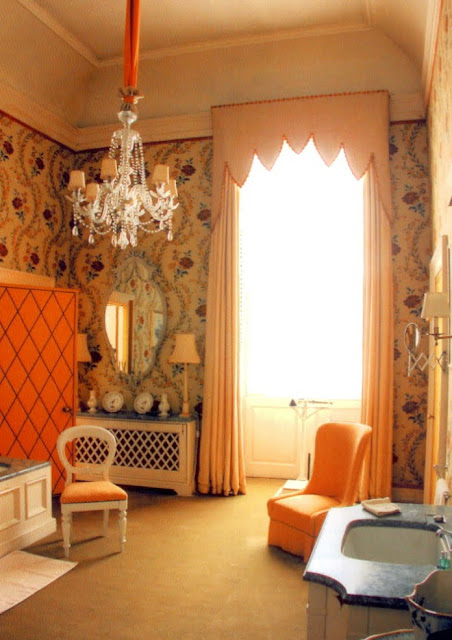 the Tynley Bedroom
fully covered in matching paper and fabric 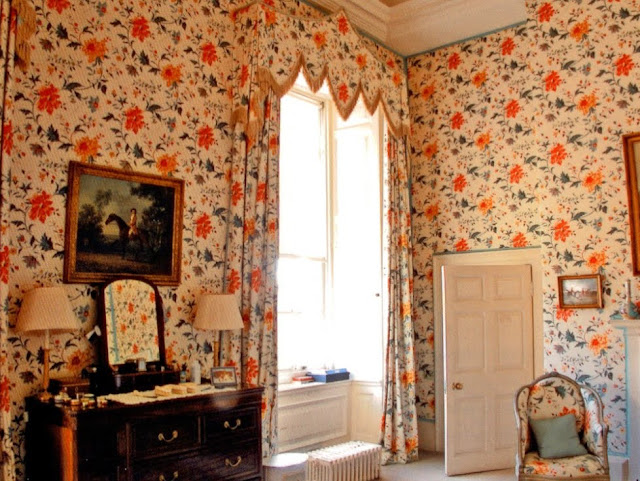 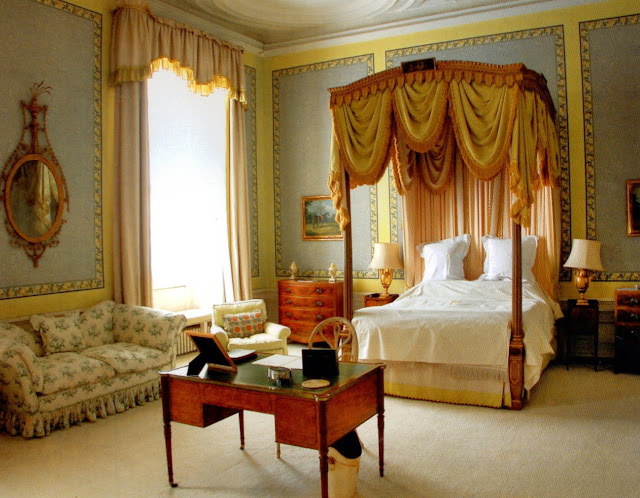 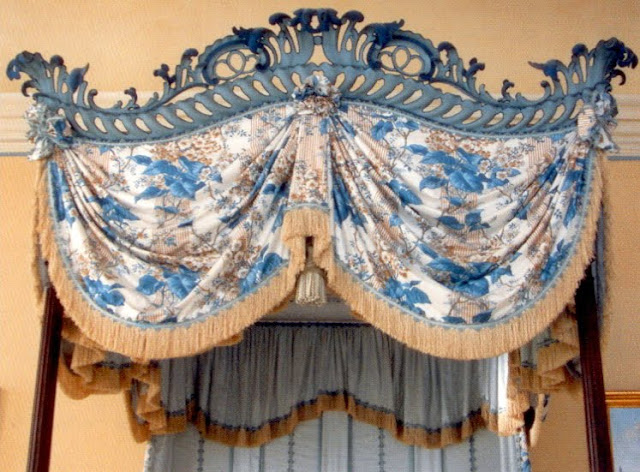 (the Master bed above)

a Fowler sketch of the Stone Hall Curtains 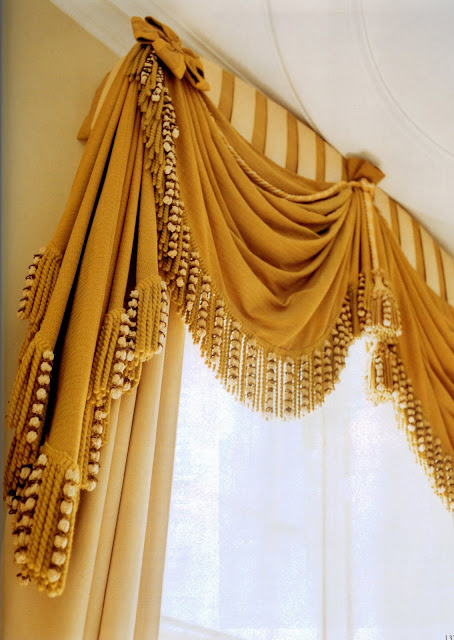 close up of the heavy wool curtains-flawlessly made


the Stone Hall
John Fowler arranged this beautiful space as a hall-cum-sitting room. The Hall- with its strong compartmented ceiling- was named for the Nicholas Stone who designed the grand space in the 17th century. Fowler detail is never more apparent here-He had the stone chimney piece moved over a very few inches to achieve a perfect balance in the room. Fowler's curtains ride right up to the ceiling line and in between the sturdy corbels. The geometry of the tops of the curtains is Fowler at his best curtainwise. 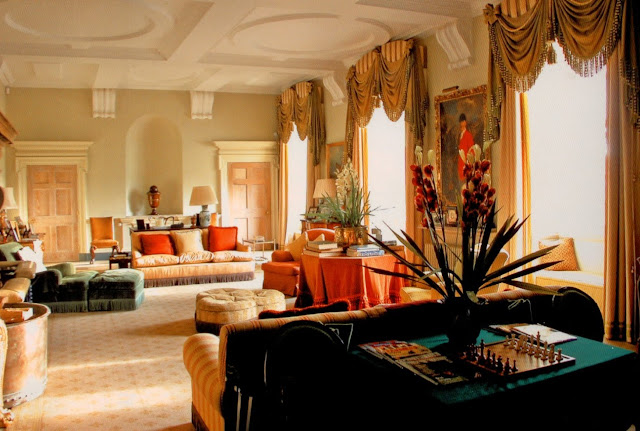 Last but not least- the incredibly beautiful curtains in the Drawing Room. It is always a wonder to see the real colours that are in a room. This photograph of the couture curtains John Fowler created for Cornbury shows the curtain colour to be a cerulean. In the left photograph below- the colour certainly appears very strong, in the right- much softer- tricks of a camera? Only the Lady of the house would know-not that it matters very much-the design is in the details. Martin Wood takes over-
The 'curtains demonstrated John's skill at achieving magnificent effects. Each window was dressed with three-swag drapery, decorated at each end with bows and choux between, and finished with balloon tails. The swags and tails were edged with a frill, lined with Dot and Cross chintz, and in turn edged with fan and double-fan edging.'
Calloway describes the dressmaker inspired confections as 'positively frivolous blue silk curtains, madly ruched and trimmed with lace.' 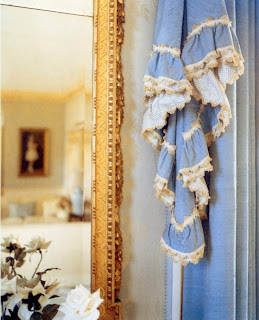 The photographs and preservation of Cornbury give us the ultimate Fowler. He was always most comfortable in private homes, creating real interiors for real people.
'I like the decoration of a room to be well behaved but free from too many rules, to have a sense of graciousness; to be mannered, yet casual and unselfconscious; to be stimulating, even provocative; and finally to be nameless of period-a fantasy expressing the personality of the owner.' -so said John Fowler as his career began in 1938. In his last work at Cornbury this ideal of Fowler's was forever  magnificently achieved.

Sources and More about Lady Rotherwick
Martin Wood's chapter on Fowler's last work is fittingly called FINAL FLOURISH. This is the definitive book on - THE PRINCE OF DECORATORS and Wood has written another beautifully put together book about Nancy Lancaster. All the descriptions are derived from Wood's research and the Colefax and Fowler: The best in English decoration, by Jones and Dickson, the sited World of Interiors Dec. 2008-Stephen Calloway written FOREVER FOWLER and the Tatler October 2009 article.

and Now Cornbury host's POSHSTOCK read about it HERE