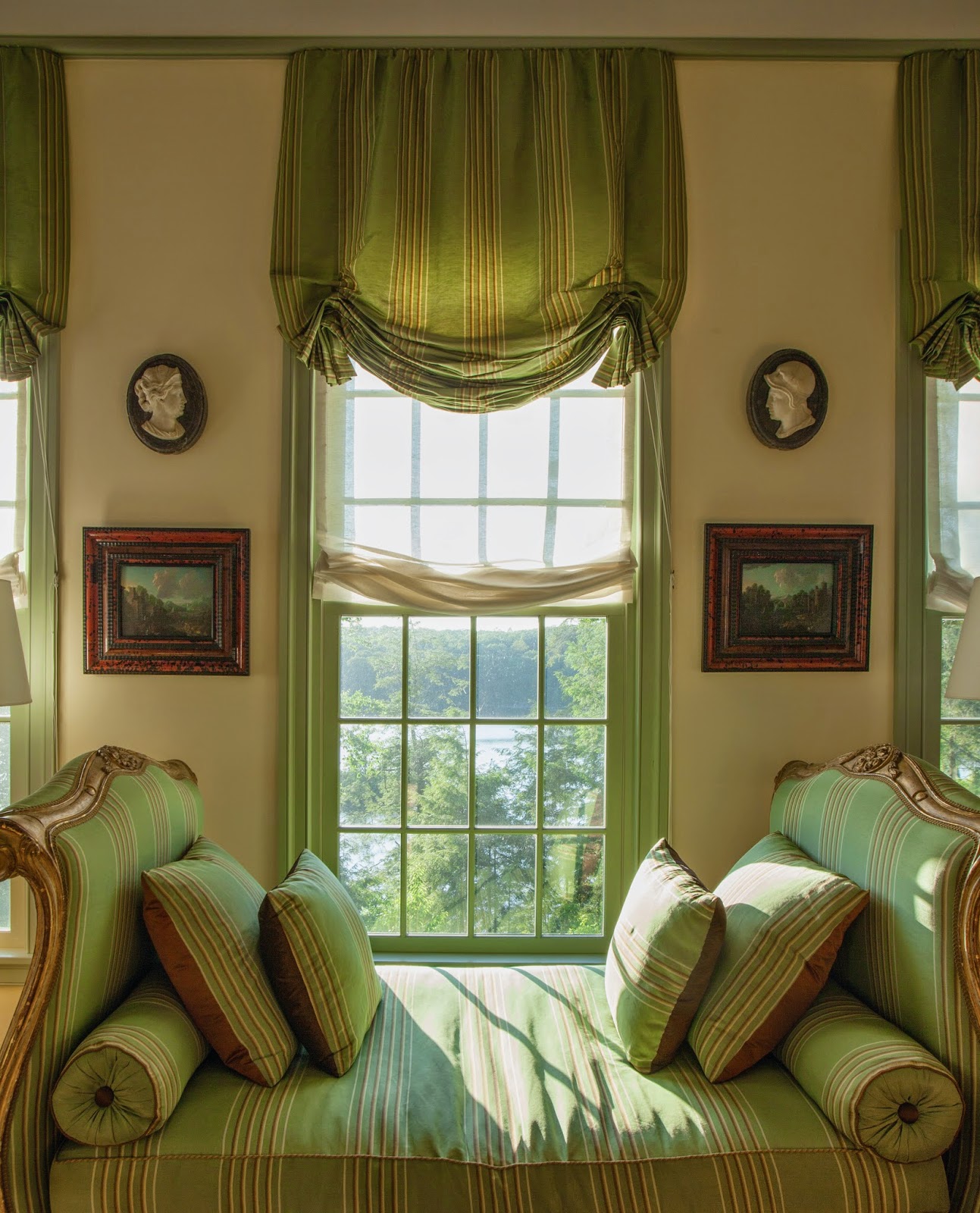 In the Living Room, the perfect perch for man or beast, looks out over North Spectacle Lake in Kent Connecticut

One of the best interior design books of the season has me fantasizing about who I would have  design rooms for me, IF, and Robert Couturier is one of those few I imagine creating my ideal room. Just one of the sort he has created for himself in his Kent Connecticut home as well as worldwide for his clients. Many are published in his new book  Robert Couturier:Designing Paradises ,written by Couturier and Tim McKeough.

“No matter how big the project, I always aim to bring a sense of levity to the design process. I value lasting friendships and crackling conversations far above any ostentatious displays of wealth.”(RC) This philosophy epitomizes his work and success.

His home's living room with seventeen foot ceilings, epitomizes Couturier's mastery at bringing a melange of periods together with relaxed quiet.

"There's one element from my childhood homes that I tried to re-create here-
the smell of dust, humid ashes, and old-fashioned perfume." Robert Couturier, Designing Paradises 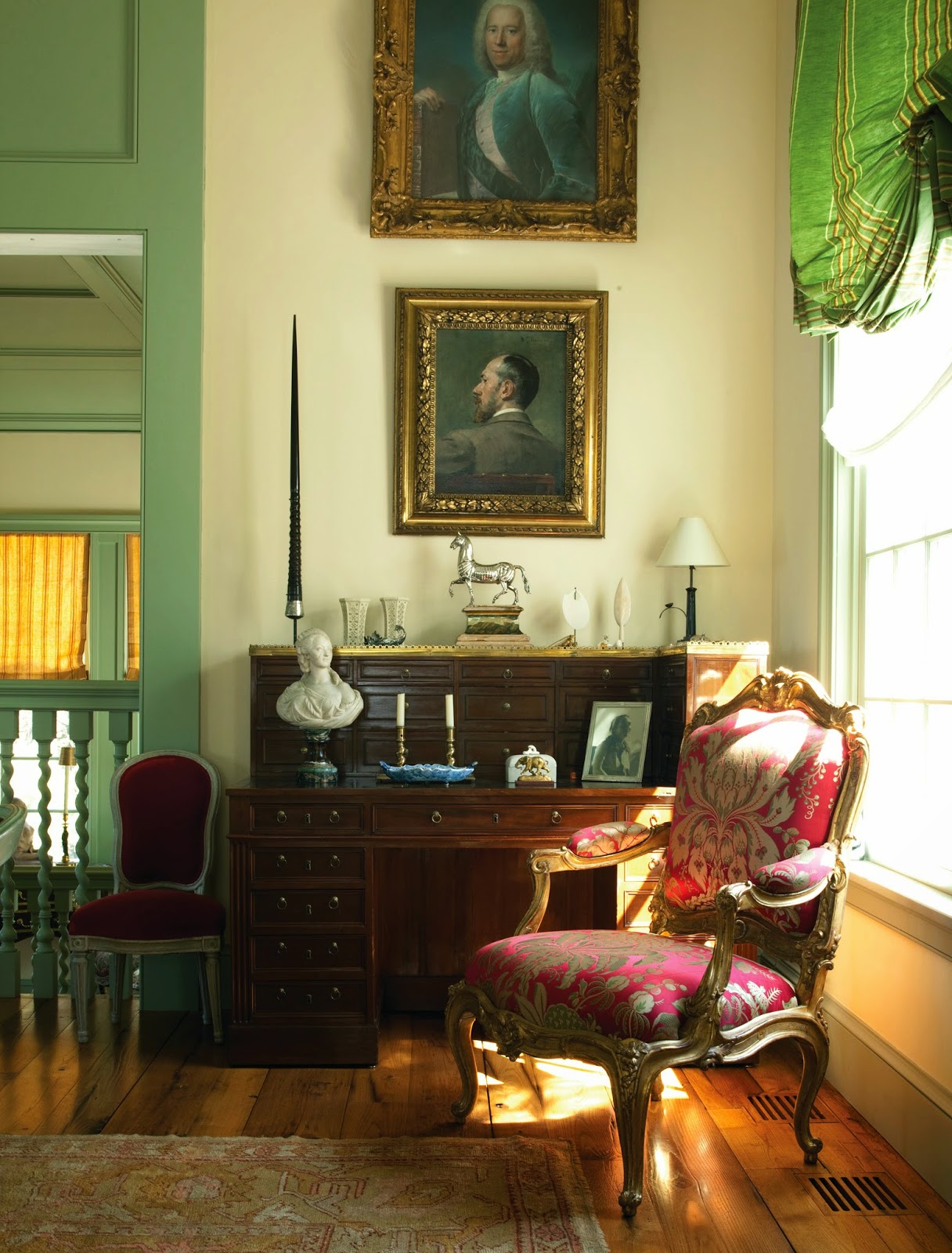 a spot on the landing in Couturier's home

Couturier's childhood reads like lost chapters in Saint-Exupéry's Le Petit Prince: "In every room of my childhood homes, I had favorite hiding places where I soaked up the atmosphere...I developed personal relationships with three-drawer commodes tombeaux, graceful Louis XV fauteuils en cabriolet...I could retrace the provenance of each piece from its creation to its current state." 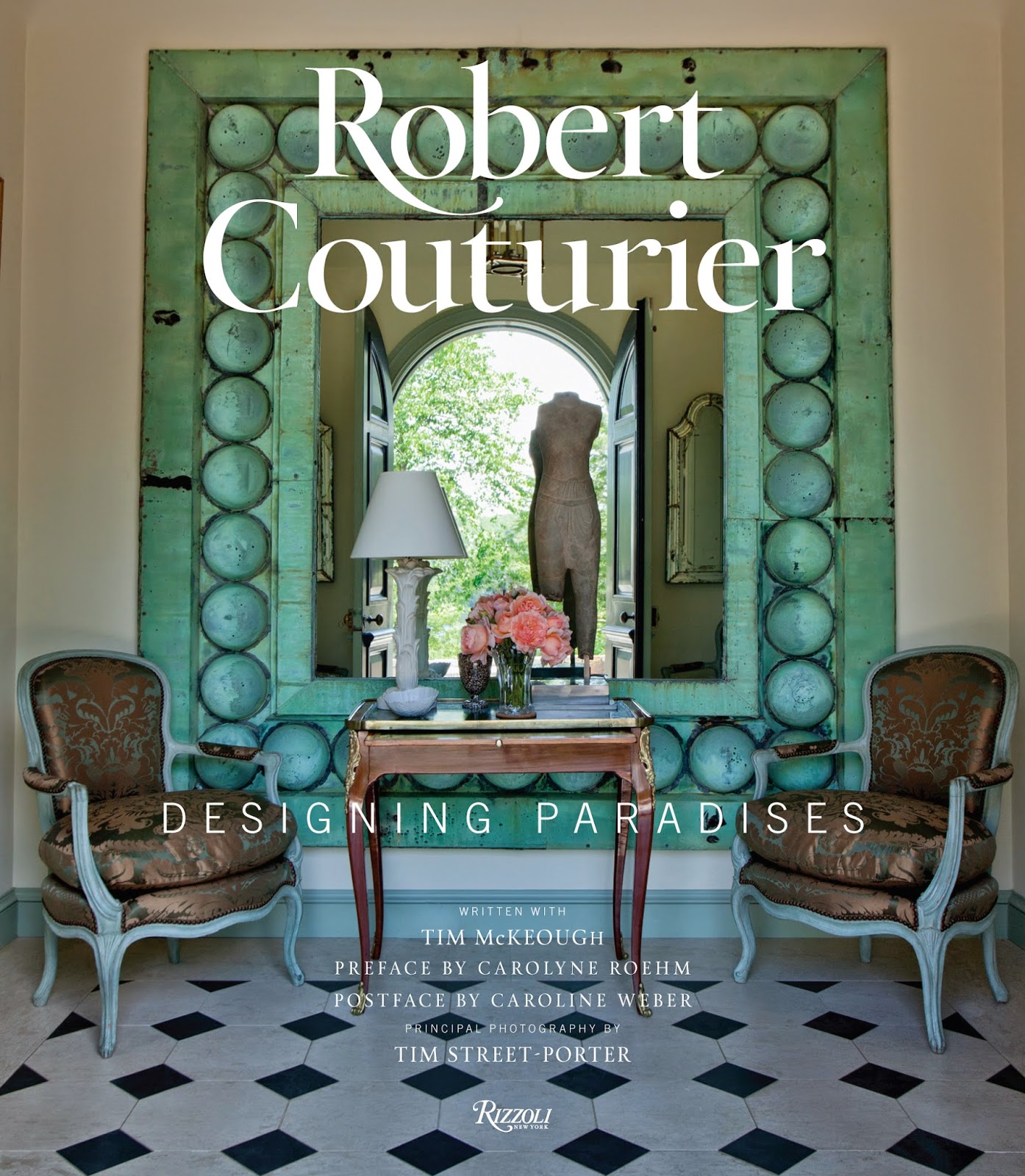 The book's cover showcases what makes Robert Couturier such a favorite of mine. George Jacob armchairs, a Louis XV table, and a salvaged verdigris mirror reflecting a 7th century Cambodian sculpture of Harihara, reveals Couturier's consummate & discerning eye. A hybrid deity, Harihara, is the embodiment of both the Hindu gods Shiva & Vishnu. Little differentiation of the two gods appear in this uniquely 7th century Cambodian hybrid. (According to the Metropolitan, "the Khmer conception of Harihara differentiated the two deities only in the partition of the headdress into a combined jatamukuta-miter and in the provision of half of a third eye on Shiva’s side.")  The subtle differences in the gods' depiction are lost in Couturier's fragmented sculpture, much like his design aesthetic.

His genius is in melding quite distinctly different design periods, reimagining them together in paradisaical harmony. He does so impeccably. 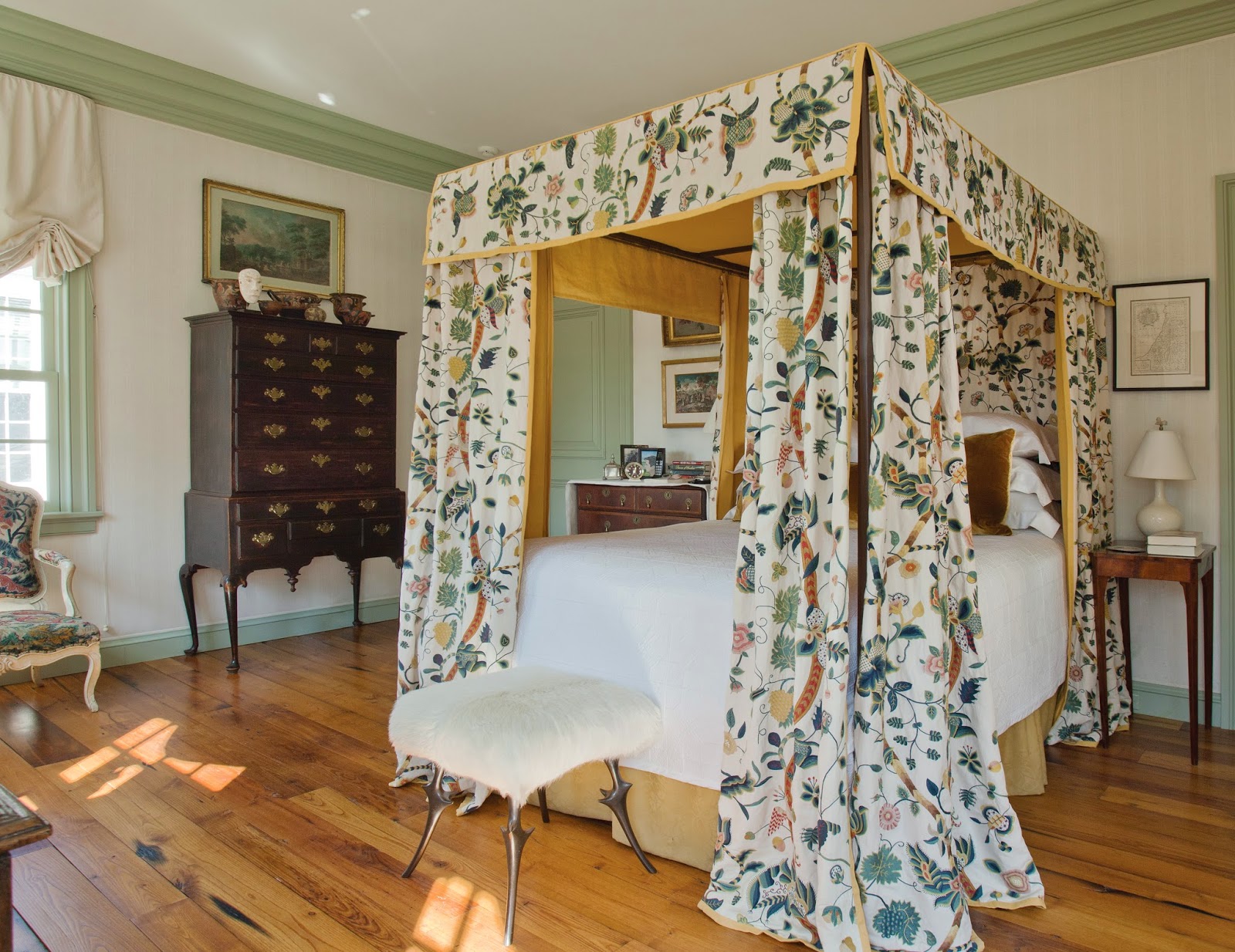 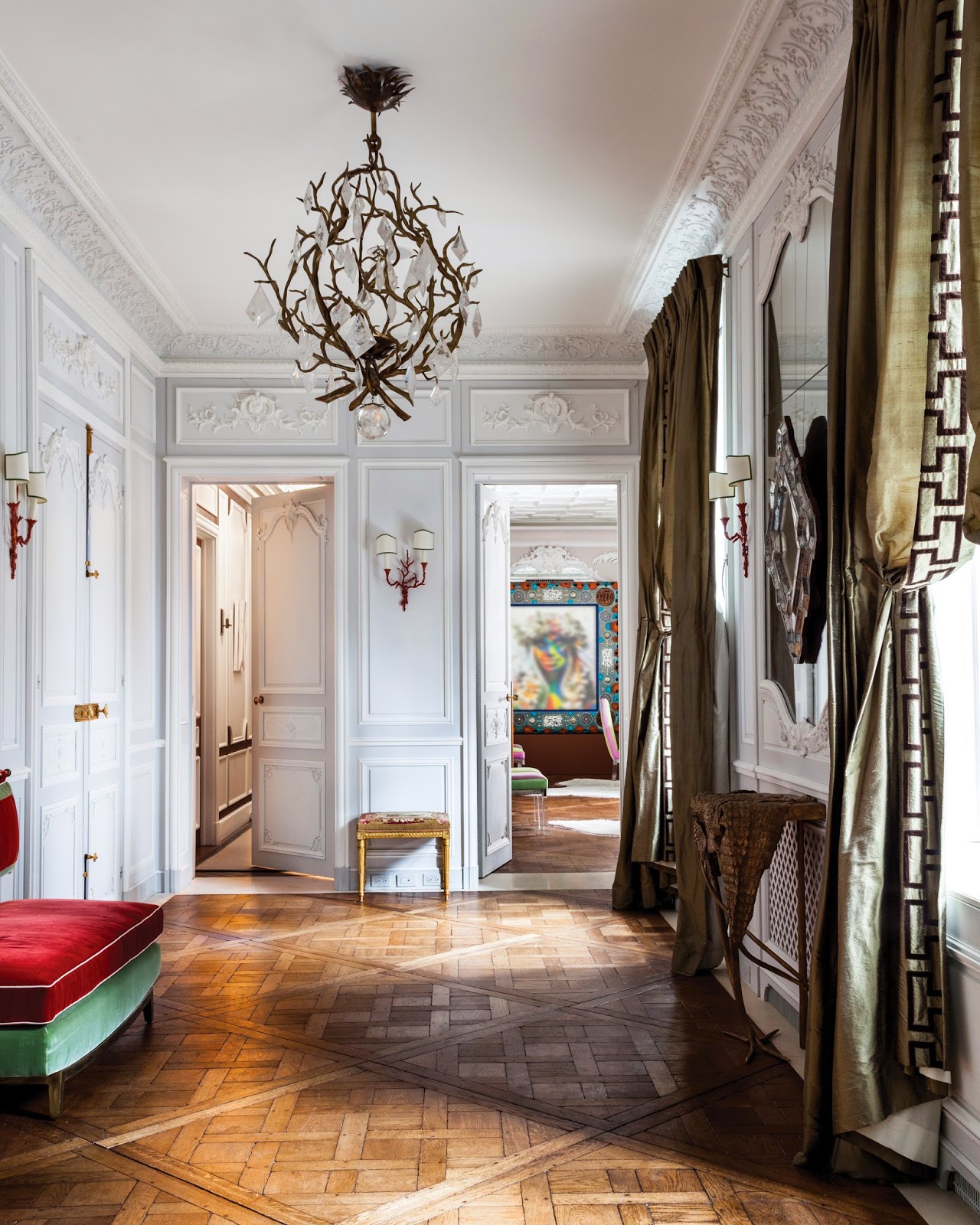 A client's Fifth Avenue apartment, another hybrid, makes clear Couturier's adroitness. The chandelier evinces the 18th century, but upon close observation it is a very modern take on the like by Herve Van der Straeten. Its organic form entwines irregular diamond shaped crystals terminating in a knot of bronze. A Claude Lalanne Croco console & Vosges sconces impose their 20th century elan on the 18th century styled boiseries and parquet de Versailles floors.
It's a heady mix.

Caroline Weber, friend & client, borrows from Baudelaire in defining Couturier's discerning interiors- "luxe, calme et volupte" (luxury, tranquility, sensuous delight). In contrast Baudelaire also writes " "tout ce qui plaît a une raison de plaire,"(everything that gives pleasure has its reason.)  Robert Couturier manages both in "designing paradises.": "Homes should reflect the way a homeowner wants to live every day, not serve as a showcase to impress guests. My job is to help people dream, to make those dreams a reality, and to transform abstract ideas into concrete creations." (RC)

Email ThisBlogThis!Share to TwitterShare to FacebookShare to Pinterest
Labels: 10 Portraits, Books, how they decorated, Robert Couturier